Cancel
Embedded with mystery and thrill, this terrifying tale of horror begins with the painting of Nagavalli reaching the hands of a painter. The poor painter is forced to sell the painting as his work by his wife to make some money. But this thought somehow doesn't go well with the painter, and he ends up losing his life to Nagavalli. The painting is then given as a prize in a dance competition to a couple. Immediately the husband loses his life while transporting the painting and then finally the painting lands in to the house of the wife Saraswathi (Lakshmi Gopalswamy). Aptharakshaka Srinivas Murthy is the head of the house. He has a wife (Vinaya Prasad) and has three daughters and his brother in law Ramesh Bhat. Bhavana plays the role of a painter, Lakshmi Gopalswamy is seen in the role of a dancer and Sandhya as a research scholar. Due to reasons unknown to the family, any attempt to get one of the daughters married leads to disastrous results. Based on a suggestion from his friend, Srinivas Murthy brings in Ramachandra Acharya (Avinash) for solving the problem. With his divine skills, the Acharya comes to know that the cause of the problem is Nagavalli and calls in Captain Dr.Vijay the psychiatrist for help. Dr Vijay's investigationd exposes the historical tale of king Vijayendra Bahadur, his atrocities against Nagavalli (Vimala Raman) and her parmor (Vineeth). After slaying Nagavalli's parmor and burning her, Vijayendra Bahadur leaves the kingdom facing revolt from his people. The spirit of Nagavalli is in search of this king who is believed to be alive somewhere. The concept of some sages and saints leaving in the Himalayas for hundreds of years has been cleverly adapted here and you see the old Vijayendra Bahadur still alive. Amidst dangerous and seemingly otherworldly events, it is now up to Dr Vijay to expose the person in whose body the spirit has taken solace in, within Srinivas Murthy's family. However, the question remains, even after positively identifying the possessed person, will he succeed in extinguishing the vengeful spirit, without harm to the person it has taken control over?
See Storyline (May Contain Spoilers)

This thrilling, multi-dimensional tale starts off with an ancient painting of Nagavalli (Vimala Raman) floating away to distant places, where it finally comes into the hands of a village painter. The painter brings it home so as to restore it back to its original look. However, when his wife asks him to sell the painting, he becomes furious, saying that he wouldn't sell it off even at the cost of his life. The next day, the painter is shown to be dead under mysterious circumstances, possibly being a suicide.

The painting is then sold off to a dance competition, which was distributed as a prize to Bharata Natyam dancer Saraswathi (Lakshmi Gopalaswamy), her husband and her family. On the Engagement day of Gowri (Sandhya), one of her friends had fainted by encountering a huge thirty-feet Snake, and the bridegroom had run away from the family house fearing of something. All strange incidents happen as the family called for a snake charmer to the house, but the snake charmer had died when he attempted to make the serpent appear.

All directions point to the huge portrait of Nagavalli, and is observed that the portrait is the cause for this. Everyone is warned to not go to the outhouse or to the room where Nagavalli's painting is. One night, Dr. Vijay goes to the outhouse as he heard anklet sounds, and he sees another smaller portrait of Nagavalli in the outhouse. It is then revealed that Saraswathi is still alive, but became mad after the truck accident in which her husband died while he was carrying the painting of Nagavalli, and that she said that no one accepted to marry the second daughter Geetha because Saraswathi was mad and so Geetha vowed that she wouldn't marry, and since they didn't want Gowri's situation to be like this, they lied saying Saraswathi was dead, and locked her up in the outhouse.

On more than a few occasions, someone attempts to murder the Acharya. Suspecting Saraswathi, the acharya asks the family members to bring Saraswathi to the temple and that he will show everyone that Nagavalli is in Saraswathi's body, but as Saraswathi steps the temple, all the animals run out of the temple. Suspecting each and every person in the family, Dr. Vijay starts to investigate everything so he goes to the library to read a book based on Vijaya Rajendra Bahaddur's life and further information on Nagavalli too.

It is revealed in the book that he had attempted to escape as one of his men had spread a dirty rumour about him, which caused the whole Ramnagara Dominion and the people to go and slaughter and assassinate him... but the book doesn't say if he got assassinated, or if he really committed suicide or if he is alive. Dr. Vijay finishes reading the book and whilst signing the ledger, he reads the name above him: Nagavalli... and he understands that she had read the book before he had.

Dr. Vijay also investigates about Saraswathi's husband's death and the snake charmer's death, and he comes with information that the snake charmer's death and Saraswathi's husband's death had nothing to do with Nagavalli. Dr. Vijay reveals that Raja Vijaya Rajendra Bahaddur is still alive when he printed out an astrological profile and showed the astrologer, who revealed it. So Dr. Vijay goes to the Fort where the Raja is, and at the time, the Acharya performs a pooja to try to bring Nagavalli out of Saraswathi's body.

Then later, he explains to everyone that Gowri had written both the names while she signed the ledger: Gowri in English when she was borrowing the book, Nagavalli in Telugu when she was returning the book, and that it was also her who scared the bridegroom away on the Engagement day and sat downstairs like as if she didn't know anything. In order to know more about Nagavalli's lover Ramanatha (Vineeth), she went to Nagavalli's house as Gowri, and returned with Nagavalli's photo, completely as Nagavalli.

Gowri later goes to the fort where Vijaya Rajendra Bahaddur is, to kill him. Dr. Vijay, knowing Gowri would have definitely seek revenge goes to the fort where the Raja almost gets burnt to death, but he survives when it starts to rain, then Dr. Vijay has a battle with him, and the Raja almosts decapitates Gowri/Nagavalli, but before he does so, the Raja gets struck by a lightning; thus, throwing his sword above and as it comes down, it stabs the Raja in the neck, who then dies. Gowri is no more affected by Nagavalli anymore and is going to marry the bridegroom she scared away, and Geetha is going to marry too and it all comes to a happy ending.

Based on 0 rating
0 user 0 critic
Did you know? This movie was also dubbed in several languages in Hindi as 'Sab Ka Rakhwala' and in Bengali as 'Amar Rakshak'. Read More
0 User Reviews
No reviews available. Click here to add a review.
Cast

Vishnuvardhan's 200th Kannada film although it was posthumously released, turning Aaptharakshaka as a veteran actor.

Aaptharakshaka was remade into Telugu with the title 'Nagavalli' with Venkatesh Daggubati.

This movie was also dubbed in several languages in Hindi as 'Sab Ka Rakhwala' and in Bengali as 'Amar Rakshak'. 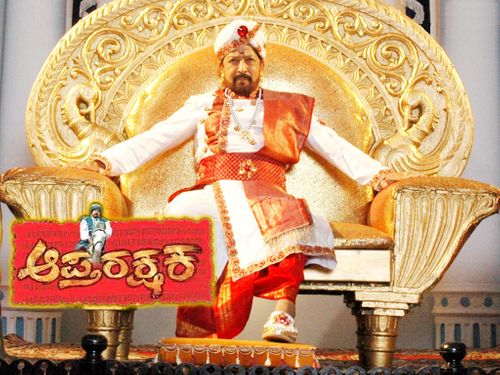 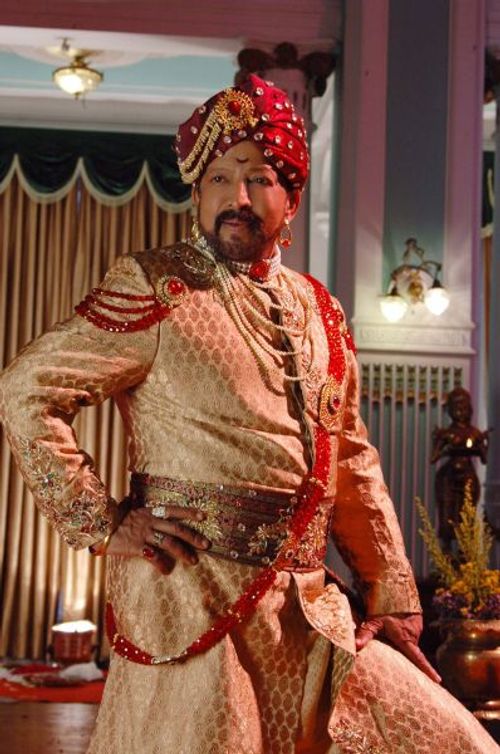