Cancel
Saraswathi Amma lives a saintly life having denounced all worldly pleasures. Anandan her younger brother, lives with her. Saraswathi Amma is a disciple of Giridhara Yogi whose lives in her town. Ponnamma is her faithful servant. Raghavan is a deaf-dumb, man in the neighbourhood. He silently loves Ponnamma. Anandan's friend Appukuttan is a bachelor and lives nearby. He takes a liking for Saraswati Amma and even proposes to marry her. Though Saraswaathi gets annoyed she develops a soft corner for him. Anandan seduces Ponnamma and she becomes pregnant. He then abandons her and Ponnamma is thrown out of Saraswathi’s house, but she finds shelter in Raghavan's house. Appukuttan brings Anandan back home and forces him to ask Ponnamma's hand in marriage. But she refuses and prefers to marry Raghavan. Giridhara Yogi elopes with Raghavan's sister who was his favourite disciple. Saraswathi Amma realises that her religious gullibility has been the cause for so much suffering.
See Storyline (May Contain Spoilers)

Ponnamma, the beautiful servant of the devout Saraswathi Amma, is seduced and made pregnant by Saraswathi’s brother Anandan, an office worker. Ponnamma is thrown out of Saraswathi’s house, but finds shelter with a progressive-minded neighbour, Appukuttan, who brings the absconded Anandan back and forces him to offer to marry Ponnamma. She refuses and prefers to marry the deaf-mute odd job man Raghavan who has loved her all along. Saraswathi finally realises that her religious gullibility caused much suffering, and she discards her saffron robes in favour of a new life (to be reached by train) with the tolerant Appukuttan.

Based on 0 rating
0 user 0 critic
Did you know? Adimagal was selected for the 21st edition of International Film Festival of Kerala (IFFK). Read More
0 User Reviews
No reviews available. Click here to add a review.
Cast 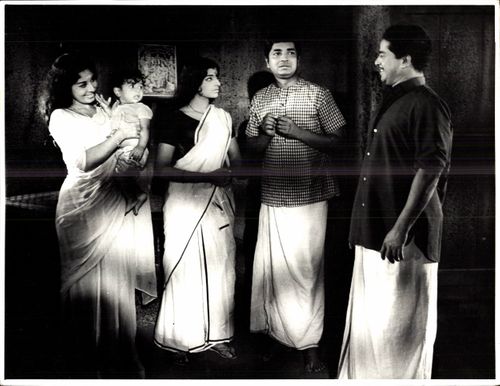