Cancel
This evocative bio pic tells the adventurous tale of Amelia Earhart, the legendary aviatrix and enigmatic symbol of the American free spirit, who was guided by a profound curiosity for everything life had to offer. Earhart’s early aviation triumphs and meteoric rise to fame and fortune were propelled along by her tempestuous partnership and eventual marriage to publisher George Putnam (Richard Gere). Bound by mutual ambition, admiration and, ultimately a great love, their bond could not be broken even with her brief passionate affair with Gene Vidal (Ewan McGregor). Ms. Earhart was the first woman to solo the Atlantic and was the first pilot, man or woman, to fly unaccompanied across the Pacific. In Amelia’s attempt to be the first to fly around the world in an equatorial flight her life was tragically cut short with her mysterious and untimely disappearance over the South Pacific in 1937.
See Storyline (May Contain Spoilers)

On July 2, 1937, Amelia Earhart (Swank) and her navigator, Fred Noonan (Eccleston), are on the last leg of an around-the-world flight. Moving in vignettes from her early years when Earhart was captivated by the sight of an aircraft flying overhead on the Kansas prairie where she grew up, her life over the preceding decade gradually unfolds. As a young woman, she is recruited by publishing tycoon and eventual husband George Putnam (Gere) to become the first woman to cross the Atlantic Ocean, albeit as a passenger. Taking command of the flight results in a success and she is thrust into the limelight as the most famous woman pilot of her time. Putnam helps Earhart write a book chronicling the flight, much like his earlier triumph with Charles Lindbergh's We, gradually falling in love with his charge, and they eventually marry, although she enacts a "cruel" pledge as her wedding contract.

Embarrassed that her fame was not earned, Earhart commences to set myriad aviation records, and in 1932, recreates her earlier transatlantic flight, becoming the first female pilot to fly solo across the Atlantic. Throughout a decade of notoriety, Earhart falls into an awkward love affair with pilot and future Federal Aviation administrator Gene Vidal (McGregor). In a display of romantic jealousy, Putnam quietly tells Amelia that he does not want Vidal in his house. Earhart is annoyed by the seemingly endless agenda of celebrity appearances and endorsements but Putnam reminds his wife that it funds her flying. They each acquiesce to the other's wishes and Earhart is drawn back to her husband on the eve of her last momentous flight, a round the world flight fraught with perils. Earhart's first attempt ends in a runway crash in Hawaii, due to collapsed landing gear. Earhart shuts off the fuel supply but her aircraft requires repairs before the flight can be attempted again. Eventually, she takes the repaired Lockheed Model 10 Electra "Flying Laboratory" in a reverse direction, leaving the lengthy transpacific crossing at the end of her flight.

Setting out to refuel at tiny Howland Island, radio transmissions between USCGC Itasca, a Coast Guard picket ship, and Earhart's aircraft reveal a rising crisis. Earhart radios to Itasca that the sky has become cloudy and overcast. When Itasca attempts to radio her back, however, all Earhart gets is static. For the rest of the approach, Earhart cannot hear Itasca's transmissions, although they can hear hers. The Coast Guard radio operators realize that they do not have sufficient length to provide a "fix". Itasca has a directional finder with a dead battery, and weak radio communications prevent Earhart and USCG Itasca from making contact. Running low on fuel, Earhart and Noonan continue to fly on over empty ocean, as Earhart informs the Itasca that she is on position line 157-337, running north and south. She is not heard from again. A massive search effort is unsuccessful, but solidifies Earhart as an aviation icon.

Based on 0 rating
0 user 0 critic
Did you know? Hilary Swank, who played the titular role, also took on the role of Executive Producer, working closely with Nair, the director. Read More
0 User Reviews
No reviews available. Click here to add a review.
Cast

Revealing Mistakes
When Amelia Earhart asks George Palmer Putnam to dance with her, music plays as soon as she turns the radio on. Radios of the era had vacuum tubes, which had to warm up before anything came from the speaker.

Revealing Mistakes
In the Papua radio shack and the Naval facility, no one changes the transmitter from Standby to Transmit during the shortwave radio conversation.

Revealing Mistakes
When Amelia Earhart sets her Vega down in Ireland, it's pristine. There isn't a single bug splatter or any other blemish on the finish to indicate that it just flew the Atlantic ocean.

Factual Mistake
When Amelia is approaching Karachi, it is 1935 and the caption on the screen states "Karachi, Pakistan". Pakistan wasn't formed until Partition from India in 1947. So in 1935 Karachi was still part of India.

Factual Mistake
The third-class petty officer, who is nodding off, salutes the second-class petty officer when he enters the room. Enlisted men only salute officers, not each other. Additionally, Navy and Coast Guard personnel never salute indoors, and they do not salute while "uncovered" (not wearing headgear.)

Continuity
When "Bill" Stultz is near the dock where the "Friendship" plane is getting ready to take off, a coffee cup is in his hand. When he decides to get on the plane, he walks down the dock and puts his cup on a barrel. When the plane turns into the harbor a few seconds later, the cup is gone.

Continuity
When Amelia Earhart and Fred Noonan talk in the Papua New Guinea hut, a woman leaves the bar, then reappears in the same spot a few seconds later.

Character Error
As mentioned in an earlier post, the 3rd Class Petty Officer on the Itasca should not have saluted the 2nd Class Petty Officer, but the mistake that is more unusual is that when the Commander steps into the room later on, no one says, "Attention on deck!" The standard call when an officer is present. Coming to attention is done instead of saluting indoors, and is stood until the officer says, "Carry on".

Audio/Video Mismatch
When Amelia Earhart is flying and thinking about riding the horse, the horse and rider switch from trotting to galloping between shots but the sound is of a horse cantering throughout the entire scene.

Audio/Video Mismatch
In the scene when the "Friendship" is about to take off for the first time, we hear the sound of an engine firing and running up. At the same time we see the center engine just starting to turn over, and neither of the other two engines are running.

Revealing Mistakes
At the airport in Hawaii, a modern plane can be seen far in the background.

Miscellaneous
George Palmer Putnam and Amelia Earhart hear "Moonglow" on the radio in 1928. The song was recorded in 1934.

Miscellaneous
When Amelia Earhart is signing the Lucky Strike endorsement, George Palmer Putnam hands her what appears to be either a ball point pen or a mechanical pencil. Ball point pens were not in common use until the late 1930's. If this were a pencil, one would never sign a contract in pencil.
Trivia:
Gene Vidal (played by Ewan McGregor), who was widely assumed to have had a romantic relationship with Amelia Earhart as depicted in this movie, had only one child, Gore Vidal (played by William Cuddy). Gore eventually grew up to become quite a celebrity himself as a controversial but successful author, screenwriter and political activist.

The movie shows Amelia Earhart finishing third in the first Santa Monica-to-Cleveland Women's Air Derby in 1929, but does not explain why. At the last stop before the final leg of the race to Cleveland, Amelia Earhart and her friend Ruth Nichols were tied for first. Nichols took off right before Earhart, but her aircraft clipped a tractor on the runway and flipped over. Instead of taking off, Earhart ran to Ruth's plane to drag her to safety. After Earhart was sure that Nichols was not seriously hurt, she took off for Cleveland but finished third largely due to her delayed takeoff. A Warner Bros. movie, Women in the Wind (1939), is also based on this air race and features a plot loosely inspired by this incident.

A Lockheed 12 Electra Junior was used to represent the modified 10E Electra that Ms. Earhart flew in her final flight. The 12 is smaller than the 10.

Although Swank underwent pilot training in Wolfville, Nova Scotia for filming at Acadia University, her appearance in the aerial sequences was limited, with three other women pilots contracted for the flying scenes.

A large section of the ring for this movie took place in New York, Toronto, Parkwood Estate in Oshawa, Nova Scotia, Dunnville, Ontario and Niagara-on-the-Lake, Ontario as well as various locations in South Africa.

Hilary Swank, who played the titular role, also took on the role of Executive Producer, working closely with Nair, the director.

The screenplay for this movie was written by Ronald Bass and Anna Hamilton Phelan, using research from sources including East to the Dawn by Susan Butler and The Sound of Wings by Mary S. Lovell. 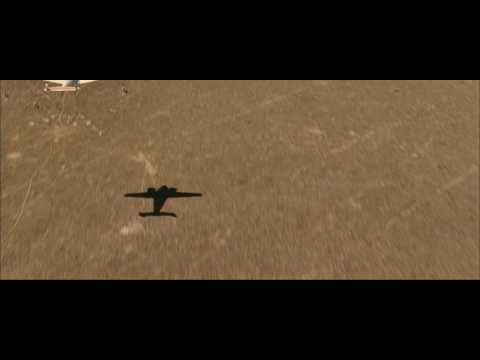 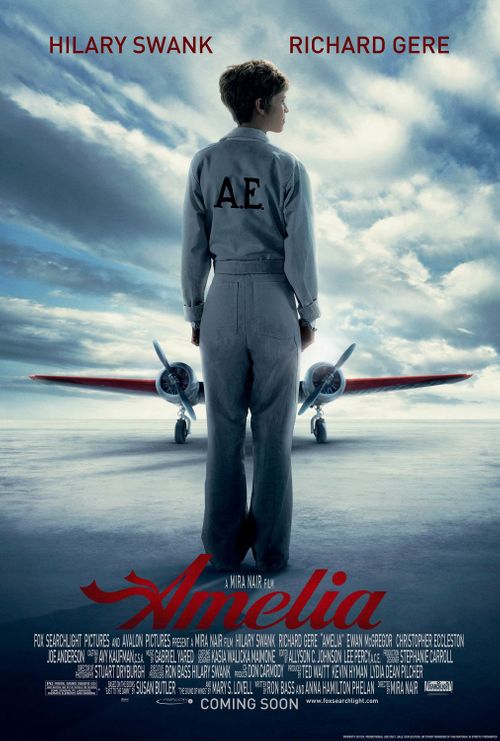 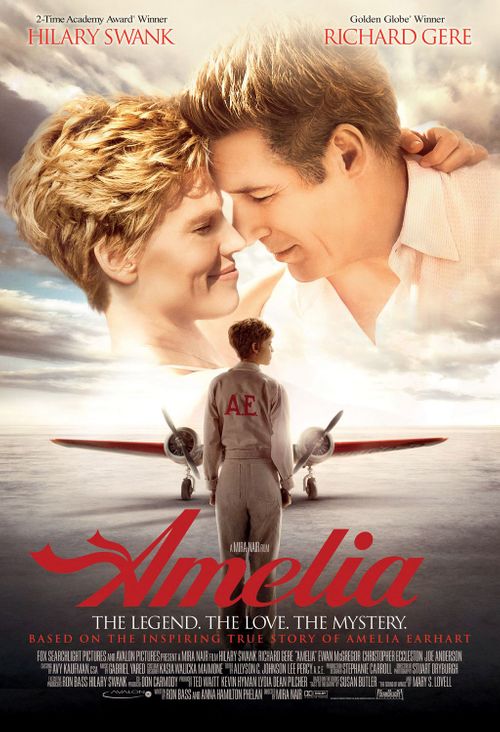