Cancel
In romantic Paris, two Parisians of Indian origin are in love namely Shyam or Sam and Roopa. Mystery and intrigue surround this romance, as Roopa is abducted and held by criminal mastermind Jack and his minions, who will trade her for a hefty ransom. Roopa has a look-alike in the shape and form of Suzy, who is sent in place of Roopa to ensure that the money is received, while the real Roopa is still being held captive. Sam must use all the resources available to in order to set Roopa free, but he will have a difficult time to differentiate between Suzy and Roopa.
See Storyline (May Contain Spoilers)

After being unsuccessful in finding her true love in her own country, India, the rich Deepa (Sharmila Tagore) goes to Paris, France in search of it. Her father's secretary already lives there, so to take care of her in the unknown country, her father informs him and also hires an assistant, Honey, and a driver, Makhan Singh (Rajindernath). On one of her outings, Deepa meets Shyam/Sam (Shammi Kapoor), who immediately falls in love with her and begins to follow her around. After some initial resistance, Deepa eventually gives in to his charms.

Meanwhile, Deepa's father's secretary's son, Shekhar (Pran) needs money to clear his gambling debts. Knowing that Deepa is rich, he plans to marry her. Jack, a gangster to whom he owes the money, threatens him to repay the debts at the earliest. Shekhar tells him that he will do so soon by marrying a rich girl, Deepa. However, since Deepa does not love him, she refuses telling him that she only loves Sam.

When Jack sees Deepa, he is taken aback and mistakes her to be someone he knows. But Deepa remains clueless. Jack then takes Shekhar to his casino/ hotel, where they see a girl who is identical to Deepa. Her name is Suzy (Sharmila Tagore), a club dancer in the same casino.

Shekhar, angry at Deepa, hatches a plan. He approaches Suzy and convinces her to be a part of his plan by offering her a huge amount of money. He takes Suzy with him and shows her Deepa with Sam, so that she can learn her mannerisms. When Jack kidnaps the real Deepa, Shekhar puts Suzy in her place at her home. Due to this replacement, initially nobody finds out about Deepa's kidnapping. Suzy pretends to be Deepa and goes out with Sam. Eventually Sam starts to notice the difference. He get suspicious when he notices Suzy (pretending to be Deepa) smoking and drinking.

Deepa's father learns of Deepa's kidnapping and flies to Paris. He and Sam discover that Suzy is Deepa's lost twin sister, who had been kidnapped when she was very young and her real name is Roopa. Deepa's father is overjoyed that he has found his daughter, but Suzy refuses to accept herself as his daughter.

Sam follows Suzy to find whereabouts of Deepa. Suzy puts a condition that Sam has to marry her before she will tell him about Deepa. She has fallen in love with him while pretending to be Deepa. Sam refuses saying that he only loves Deepa. This angers Suzy at first but later she realises that she should not come between her sister and her love.

Jaggu, now working for Jack, who has also been an ex-employee of Deepa's father, goes to see him asking for ransom to release his daughter. Deepa's father agrees, but Sam slams him unconscious, before which he tells them to go to a certain place with the ransom money. Shekhar overhears this conversation.

As the story climaxes, Suzy arrives with Jack at his hideout where he has kept Deepa to show her the resemblance and leaves them alone for a while to take care of some chores. Suzy then reveals to Deepa that she is her lost twin sister. Despite her refusal, she convinces Deepa to switch places and escape.

Sam and Shekhar go separately to Niagara Falls to ransom Deepa. Shekhar arrives at the secret hide out first. At the same time, one of Jack's men informs him about Sam's arrival. When Jack confronts him, Shekhar kills him and the real Deepa (pretending to be Suzy) escapes just before that. Shekhar then collects Suzy thinking she is Deepa. He learns that she is actually Suzy when she sees Sam and yells a warning that Deepa has escaped and is waiting for him at Jack's Boat. Angered, Shekhar shoots Suzy and tries to shoot Sam. Sam escapes, and just before following Shekhar, he tells Makan Singh to go and help injured Suzy. Shekhar reaches the boat where Deepa is waiting for Sam and drives off with her. Sam also reaches just after Shekhar drives off. He jumps in the boat from a helicopter and beats Shekhar up. Sam throws him overboard where he floats over the waterfall. Deepa and Sam escape to a small rock in the middle of waterfall from where they are rescued by the helicopter.

The movie closes with Sam and Deepa hanging to the ladder of helicopter with a song (Aasmaan se aya farista) playing in the background.

Tagline: A Journey in Search of Eternal Love...

Based on 0 rating
0 user 0 critic
Did you know? Swedish Musician Clabbe took the song "An Evening in Paris" and converted it into a disco tune. Read More
0 User Reviews
No reviews available. Click here to add a review.
Cast

Buy Tracklist of An Evening in Paris

Swedish Musician Clabbe took the song "An Evening in Paris" and converted it into a disco tune.

The scene where Shammi Kapoor asks a young boy to kick him in the shin is copied from It Happened at the World's Fair (1963), which stars Elvis Presley. 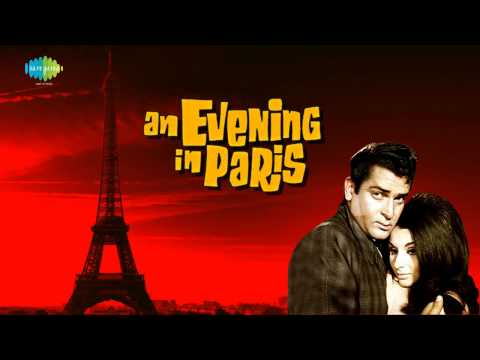