Cancel
A man who does everything unintentionally is misunderstood by the father of the girl whom he loves. Full storyline : Aparichit 2 revolves around the accidentally-turned bitter relationship of Suresh and Sitharam. Suresh is a simple yet loving man, who one day meets Sitharam, the good and the powerful man in the village. Suresh meets with a small accident by Sitharam, and later Sitharam meets one too, from Suresh. Both being unknown or "APARICHIT" to each other don't realize themselves and form a different image of each other. Sitharam feels Suresh is a villain, while Suresh considers Sitharam a good man. One day, Suresh meets Kaushalya, Sitharam's daughter, and both fall in love with each other after a series of events. But...besides this, a series of accidental events also takes place, which causes Sitharam to become Suresh's enemy. When he comes to know about the relationship of Suresh and Kaushalya, he decides to part them away. Despite being heart broken, Suresh decides to win back Kaushalya and her father's trust in the best possible way he can. Can Suresh prove his goodness and win back his love? The solution to this question lies in watching this fast paced emotional action movie.

Aparichit 2 is a good family entertainer that wins mostly because of its two lead men
Prashast Singh, Behind Woods
0

Poor dubbing spoils the fun the original music would have given!
by Prashast on 24 May, 2016

The music of Aparichit 2 is nothing much to be talked about. It's just like a poorly dubbed album with even poor lyrics, that spoil the fun of the film. No lyrics actually make proper sense at all. The voices of singers too add to the pain. Only the instrumental work is worth noting. I would say nothing except that if you really want to enjoy the music, better listen to the Tamil version. Skip this album!

Not like Aparichit, but still a good family entertainer!
by Prashast on 24 May, 2016

Someone has correctly said "Don't judge a book by its cover." Similarly, I say " Don't judge a film by its poster." This is exactly the impression formed in the mind of every viewer, after watching APARICHIT 2. Although the title indicates it as a sequel to actor Vikram's first Hindi blockbuster APARICHIT, which the film actually is not. APARICHIT was quite entertaining and had left a great impact in the heart of every viewer. Whether this Vikram starrer APARICHIT 2 proves to be the same entertaining or not, let's analyze.

APARICHIT 2 is actually not a pure action film like APARICHIT.It has only one fight sequence provided for relief to action buffs. Otherwise it's only a romantic drama film with some comedy and emotion. Yet it's entertaining.

Vikram and Prakash Raj are the best things about this movie. Both the men steal the show with their wonderful performances. Priyanka also delivers a good performance. Other actors do their respective parts well. The music is good, despite of the fact that the dubbing spoils the fun of the songs at a few places. The film's comedy part is entertaining. Vivek plays his comic part very well. The film's only action scene is another major strength of the film. The film might be a bit like classic Bollywood films, yet it has a good entertainment value. Director Durai has managed to successfully craft a good family sentiment throughout this film.

However, on the other hand, the title APARICHIT 2 is deceptive. People watching it with expectations at par with APARICHIT would be really disappointed. Except Vikram and Prakash Raj, there is nothing common in both the films. The item song seemed pointless in a family entertainer and could have been easily chopped off. There are various moments where you feel them to end as soon as possible.

Overall, APARICHIT 2 is a good family entertainer that wins mostly because of its two lead men (Vikram and Prakash Raj), comedy, action and emotional scenes. You can surely watch and enjoy this film. But still, if someone asks me to choose between APARICHIT and APARCHIT 2, I would prefer APARICHIT.

Editor
Suresh Urs
Technical Details
Film Type:
Feature
Language:
Hindi
Colour Info:
Color
Sound Mix:
Dolby Digital
Frame Rate:
24 fps
Aspect Ratio:
2.35:1, 2.39:1 (Scope)
Stereoscopy:
No
Fun Stuff
Taglines:
The Stranger Returns
Movie Connection(s):
Dubbed from: Kathal Sadugudu (Tamil)
Goofs:
Errors in Geography
In many a scenes, Suresh mentions that he wanted to go to Tirupathi, and that he was happy to be in Tirupathi, while towards the end of the film, the board on the railway station of the village shows that the film was set in Thathamangalam, in Palakkad, Kerala, and not Tirupathi.
Trivia:
This film released on 20 May 2014, a day after the release date of Aparichit, which released on 19 May 2006. 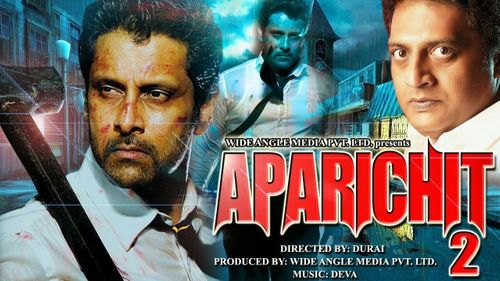 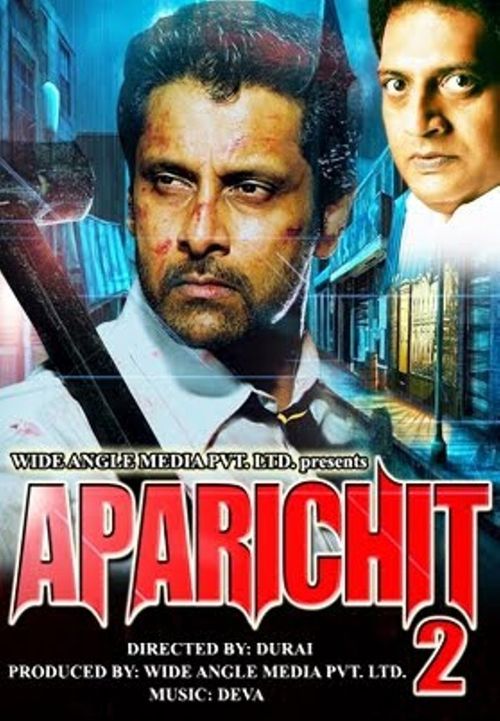