Cancel
A realistic and poignant depiction of the youthful and contemporary love story, this romantic drama portrays a tragic tale of love between two people who belong to different strata of society.
See Storyline (May Contain Spoilers)

'Baana Kaathadi' is a youthful and socially-relevant love story that reveals a poignant and tragic love story.

One day, in his rush to grab hold of a falling kite, Ramesh bumps into Priya (Samantha), a fashion technology student. In the process, her memory stick falls into his pocket, without either of them realising. The memory stick consists of six months worth of Priya's project work, and she needed to submit it.

Asking the principal for an extension, Priya searches for Ramesh, and finally manages to find him. She thoroughly humiliates him, while he denies the memory stick is with him. After college one day, Ramesh and his friends see Priya on the road. They tease her and infuriate her, eventually leading to her slapping him.

A few days later, while Ramesh's mother is washing his pants, she finds the memory stick. Ramesh realises the fault is his, and immediately goes to return the device. Priya is impressed with his attitude, as she expected him to hold a grudge and keep the memory stick out of spite, because she slapped him. This marks the beginning of their friendship.

As time passes, Priya and Ramesh become closer. Urged by his friends, Ramesh goes to tell Priya that he loves her. However, while asking for money from his friend Kumar (Karunaas), he accidentally takes the condom from Kumar's pocket as well. When Ramesh sees the condom, he tries to hide it from Priya. However, just then, the police arrives, and he is forced to drop it. Priya sees the condom and is shocked. She denies knowing Ramesh, resulting in him being taken to the police station.

Ramesh is finally brought home, and refuses to talk to Priya. His friends try to talk to her, but she does not listen. However, when her friend tells her how much Ramesh actually loves her, she is finally convinced.

Ramesh had actually bought Priya a grain of rice with her name written on it. Priya thus realises she also loves Ramesh and begins trying to get him to accept her. However, he refuses to accept her as he believes she thinks he is of lower-class.

In a subplot, Ramesh witnesses a murder committed by the local gangster Ravi (Prasanna). In shock, Ramesh runs away, and eventually trips over an elderly man. The next day, Ravi sends Ramesh to Gujarat as he fears for his safety.

Meanwhile, Priya receives a call from her mother telling her that her father is going for surgery, and asks her to return to the US. Priya tells Ramesh that she will be waiting at the bus stop the next day, at the same place where they first met. If he loves her, he would come. The next day, eventually being coaxed by Kumar, Ramesh goes to see her.

On the way, Ravi tries to kill him, but his conscience gets the better of him. However, he also knows there is another goon in the same bus as Priya waiting to kill Ramesh. Ramesh manages to stand in front of Priya, and they hold hands for a while. Ramesh then slips off the steps and is run over by the bus. His mother, friends and Priya mourn his death while the goon who was supposed to kill him slips away.

The movie ends with Priya in a car, looking at the grain of rice that has her name on it, that which Ramesh had presented to her for her birthday.

Based on 0 rating
0 user 0 critic
Did you know? The film marks Adharvaa's debut as a lead actor. Read More
0 User Reviews
No reviews available. Click here to add a review.
Cast 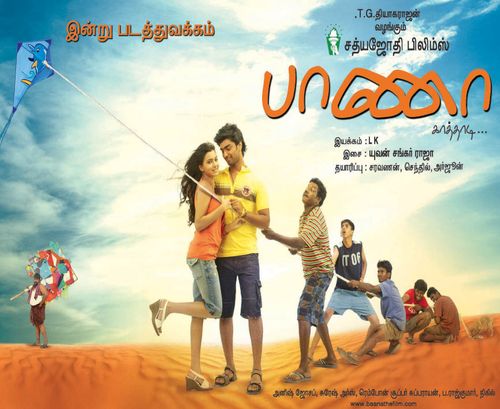