Cancel
Batman and Robin are back working side-by-side to stop the villains of Gotham City, but is there tension appearing between them, especially when one villainess who calls herself Poison Ivy can make anyone fall in love with her...literally. Along with Poison Ivy, the icy Mr. Freeze is freezing anything which gets in his way from achieving his goal.
See Storyline (May Contain Spoilers)

Batman and Robin attempt to stop Mr. Freeze from stealing a cache of diamonds. The supercriminal freezes Robin and flees, notifiying Batman that he has 11 minutes to thaw his partner. They learn that Freeze was once scientist Victor Fries, who became dependent on a diamond-powered subzero suit following an accident in a cryogenics lab he was occupying to find a cure for his wife, Nora, who was suffering from a terminal illness called MacGregor's Syndrome.

Meanwhile, botanist Dr. Pamela Isley is experimenting with the strength serum "Venom" to create mutant plants capable of fighting back against mankind's destruction of flora. She is furious to learn that her senior colleague Dr. Jason Woodrue used her Venom samples to transform a diminutive prisoner into the "super soldier" Bane. When she refuses to become the mad scientist's partner, Woodrue kills her with animal-plant toxins and chemicals. She transforms into the beautiful Poison Ivy and kills Woodrue with a venomous kiss before vowing to use her new powers to establish botanical supremacy over the world.

Alfred Pennyworth's niece Barbara Wilson makes a surprise visit from England and is invited to stay at Wayne Manor until she returns to university. Alfred is revealed to be suffering from MacGregor's Syndrome.

Ivy arrives in Gotham City with Bane as her henchman. She interrupts a Wayne Enterprises press conference at the Gotham Observatory where a giant new telescope is being unveiled, exhorting Bruce Wayne to implement a proposal that would safeguard the natural environment at the expense of millions of human lives, which Bruce summarily declines. She later appears at the Gotham Botanical Gardens fundraiser, seducing everyone present with her pheromone dust, including the Dynamic Duo, who are there to protect a diamond on auction from Mr. Freeze. When Freeze crashes the event as expected, Ivy is instantly captivated by his "ruthless charm". Despite being captured by Batman and detained at the Arkham Asylum, Mr. Freeze is released by Ivy.

Ivy then proceeds to turn off Nora Fries' life support and makes Mr. Freeze believe Batman did it, thereby persuading him that they should kill Batman as well as the society that created him. They plan to turn the observatory's new telescope into a giant freezing gun to freeze the whole world's population to death and replace them with Ivy's mutant plants.

Meanwhile, Robin has become infatuated with Ivy and rebels against Batman, just as the villainess planned. He eventually goes to meet her at her garden hide-out. Ivy's venomous kiss fails to kill Robin because Batman had prevailed on him to coat his lips with rubber. She tries to drown Robin in her lily pond and entangles Batman in her crushing vines, although they are able to free themselves when Batgirl arrives and traps Ivy in her own floral throne. Having discovered the Batcave and decided to create her own crime-fighting persona with Alfred's help, Batgirl reveals herself as Barbara.

When the Trio arrive at the Observatory to stop Freeze, the criminal has already frozen Gotham. Bane attacks Robin and Batgirl, but they incapacitate him and restore him to his original human state. The two younger heroes save Gotham by repositioning the observatory's satellites, using their mirrors to reflect sunlight from outer space to thaw the city.

Batman shows Freeze video footage of Ivy's confession about pulling the plug on Nora, but reveals that he himself restored Nora. He vows that Freeze will be allowed to continue his research at Arkham Asylum to heal Nora. Batman asks Freeze for the cure he created for the first stage of MacGregor's Syndrome for Alfred and Freeze atones for his misdeeds by giving him two vials of the medicine he had developed.

At Arkham, Ivy is joined in her cell by Freeze, who promises to make her life a living hell for attempting to kill his wife. Back at Wayne Manor, Alfred is cured and Bruce invites Barbara to live with them and continue helping him and Dick fight crime as Batgirl.

Tagline: Strength. Courage. Honor. And loyalty. On June 20, it ALL comes together...

Based on 0 rating
0 user 0 critic
Did you know? At the auction, Batman pulls out his credit card. Its "good until" date reads FOREVER. Read More
0 User Reviews
No reviews available. Click here to add a review.
Cast

Vivica A Fox
as Ms. B. Haven
Crew

Continuity
After Freeze has frozen Robin, he creates a wall of ice and rubs a window with his right hand, but in the following close-up shot he is rubbing with his left hand.

Continuity
During the first battle of the movie against Mr. Freeze, the size of the gems being fought for change between scenes.

Continuity
At first when Batgirl sends her grappling hook from her utility belt, its red and bat shaped. Then when she saves Robin its silver/chrome and in a different shape.

Continuity
In the final battle when Bane attacks Robin and Batgirl, he grabs both by the throat and pulls them backwards away from the ledge, in the very next shot however his is pushing them forwards into a wall.

Crew/Equipment Visible
At the beginning when Batman and Robin are skating in the museum it is obvious that they are wearing inline roller skates.

Crew/Equipment Visible
During the Bike Race scene, after Robin and Barbara come off their bikes and slide towards the end of the bridge you can see the rail tracks upon which the bikes and actors are being pulled along by.

Factual Mistake
When the Dynamic Trio is trying to unfreeze Gotham and can't wait the five hours until dawn, Robin suggests they use the satellites to reflect the sunlight "from the other side of the equator". This in and of itself wouldn't accomplish anything; the equator is a measure of latitude, while time of day (or night) is determined by longitude.

Audio/Video Mismatch
When Mr. Freeze says, "Then it's winter in Gotham," his lips do not match with the words one hears.

Audio/Video Mismatch
When Alfred, Barbara, Bruce and Dick are walking through the garden, Dick says, "You have secrets, Al?" but his mouth never moves.

Audio/Video Mismatch
When Batman and Robin pull grappling hooks from their utility belts, it zooms in and they are made of wobbly rubber. Whey they throw the hooks in the next frame, it makes a "clink" noise of steel hitting steel as they grab.

Character Error
When in the space rocket, Mr. Freeze says "At 30,000 feet, your heart will freeze and beat no more!" Obviously, this is false as the human heart can survive that altitude without freezing and the first thing to freeze would be his limbs, not his heart.

Character Error
When we first see Dr. Pamela Isley , she says, "Drats! My experiments to mate the Dendrobium orchid and the South American rattlesnake have failed again!" The orchid shown is a Paphiopedilum (slipper) orchid, not a Dendrobium.
Trivia:
Due to the difficulty, and large amount of time, it took to remove the Batman suit, George Clooney reportedly urinated in his suit on at least one occasion.

At the auction, Batman pulls out his credit card. Its "good until" date reads FOREVER.

In the evidence room at the prison where Freeze is held and before Bane breaks in, both the Riddler's and Two-Face's outfits can be seen.

Before George Clooney was ultimately cast, David Duchovny was the other choice considered for the role of Batman after Val Kilmer refused to return to this film.

Last Batman film viewed by Batman creator Bob Kane. He would die one year after the release of this film. This is also the last film which Kane worked as project consultant.

In Batman & Robin, in the auction scene, Batman pulls out his credit card. Its expiry date reads 'forever.' 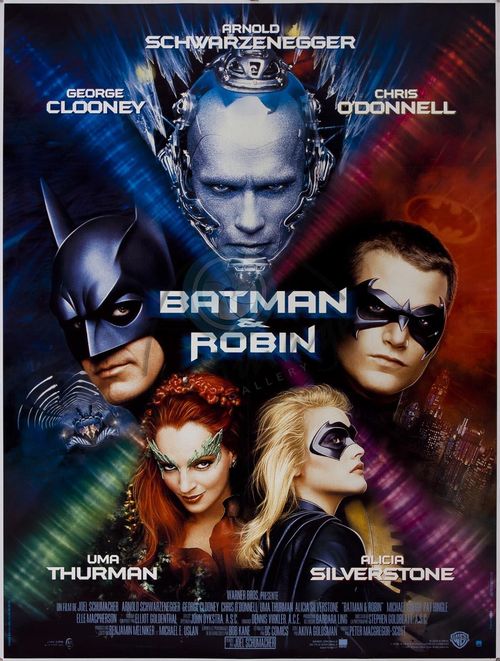