Cancel
This hard-hitting biographical drama delves into the life of Cuban poet and novelist, Reinaldo Arenas (1943-1990), from his childhood in Oriente province to his death in New York City. He joins Castro's rebels. By 1964, he is in Havana. He meets the wealthy Pepe, an early lover; a love-hate relationship lasts for years. Openly gay behavior is a way to spite the government. His writing and homosexuality get him into trouble: he spends two years in prison, writing letters for other inmates and smuggling out a novel. He befriends Lázaro Gomes Garriles, with whom he lives stateless and in poverty in Manhattan after leaving Cuba in the Mariel boat-lift. When asked why he writes, he replies cheerfully, "Revenge."
See Storyline (May Contain Spoilers)

This bold, thought-provoking drama is based on the autobiography of the same name by Cuban poet and novelist Reinaldo Arenas. In the film, Arenas, who was openly gay, is born in Oriente in 1943 and raised by his single mother and her parents, who soon move the entire family to Holguín.

After moving to Havana in the sixties to continue his studies, Reinaldo begins to explore his ambitions, as well as his sexuality. After receiving an honorary mention in a writing contest, Arenas is offered the chance to publish his first work.

Through his work and friendships with other openly gay men (such as Pepe Malas and Tomas Diego), Arenas manages to find himself.

The political climate in Cuba becomes increasingly dangerous, and in the early seventies, Arenas is arrested for allegedly sexually assaulting minors, and for publishing abroad without official consent. In the next decade, Arenas is in and out of prison, attempting and failing to leave the country several times.

In 1980, Arenas finally leaves Cuba for the US, starting a new life with his close friend Lazaro Gomez Carriles. A few years later, Arenas is diagnosed with AIDS, and after spending several years suffering he dies in 1990 with the help of Lazaro.

Set in Cuba, the film was made entirely in Mexico, with Veracruz doubling as Havana. Julian Schnabel said the crew was so pleasant to work with that, if he was making a film in the arctic, he would use a Mexican crew.

Almost every scene, according to Guillermo Rosas, was photographed with a chocolate-colored filter on the camera lens. The contributed a great deal to distinctive colors and textures in the film, especially the skin tones, and the vibrancy in green hues.

The director's wife plays Javier Bardem's mother. All of Schnabel's children have bit roles as well. 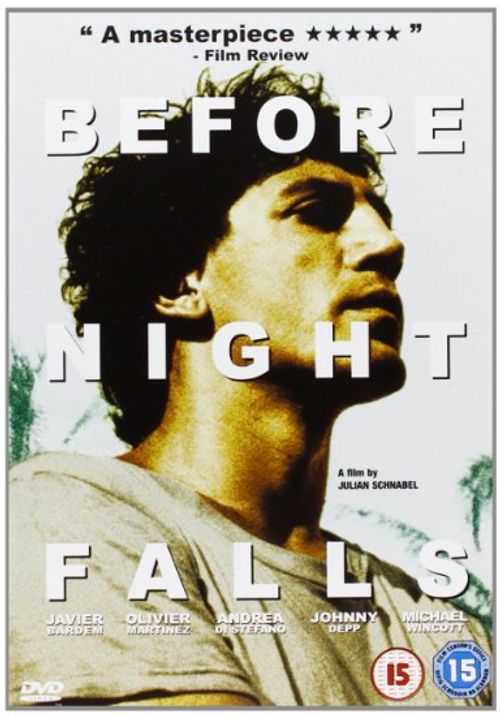