Cancel
Damien is a smart and sensitive teenager, who gets bullied in school by Thomas, an otherwise introverted and reserved a youngster. When Thomas' mother falls ill, he is invited to live in Damien's home. How will the relationship between the two boys evolve?
See Storyline (May Contain Spoilers)

This contemporary romantic drama traces the twists and turns in the life of Damien, a smart and sensitive seventeen-year-old student who lives with his mother Marianne, a doctor. His father, Nathan, is a military pilot on a mission abroad. They enjoy a comfortable life in a small town located in a valley among the mountains of the Hautes-Pyrénées.

In high school, Damien gets picked on by Thomas, a classmate, who trips him in the middle of class for no apparent reason. From then on there are constant altercations between them while playing sports and in the schoolyard. Both are outsiders at school chosen last for sports teams. In order to protect himself, Damien takes self-defense classes with Paulo, an ex-military family friend.

Meanwhile, Thomas, who is the biracial adopted son of a couple of sheep and cattle farmers, faces his own set of problems. Every day he has to walk for 90 minutes to reach the school. Marianne makes a house call to Thomas’s farm when his mother, Christine, has a pulmonary infection. Christine, who has a history of miscarriages, is pregnant and has to be hospitalized for some time.

As the reserved Thomas worries about his mother and the birth of a biological child to his parents, his grades in school begin to fail. Wanting to help, Marianne invites Thomas to come and stay with her family so he can visit his mother in town at the hospital and spend more time studying and avoid the long trip to school everyday.

This coincides with a blissful return home for Nathan for leave between his tours of duty abroad. Nathan is lovingly welcomed by his wife and son and takes it upon himself, during his short visit, to personally invite Thomas to stay with his family. Pressed by his parents, Thomas reluctantly accepts.

Sharing the same household does not improve the relationship between the two teenagers. Damien resents that his mother is charmed by Thomas and accuses him of getting sick so he can be examined by Marianne.

Away from home, the two boys fight each other in the mountains. Damien asks Thomas to drive to see a man whom he has contacted online for a sexual encounter. Thomas reluctantly drives him there, but Damien backs down, unsure of his feelings. On their way back home, Damien confesses his feelings to Thomas, saying, 'I don’t know if I’m into guys or just you.' Thomas does not welcome the revelation.

He stops the car gets out at the bank of a river. While trying to rebuff Damien, Thomas falls into a ditch and breaks his wrist. Realizing that the two boys have continued fighting, Marianne asks Thomas to return to his farm the next day. Damian and Thomas get closer at school while sitting in class together. Damien takes the first step and kisses Thomas, who initially seems to welcome the affection, but then retaliates violently, hitting Damien in the face.

Thomas is expelled from school. Damien tells his mother that Thomas hit him because he kissed him, revealing his true feelings for Thomas. Marianne is sympathetic to her son.

Nathan is killed in a mission, shattering the lives of his wife and son. After the funeral, Thomas embraces Damien while consoling him. As Marianne falls into a deep depression, Thomas moves back to live with them to help look after Marianne. He keeps her company while Damien is away at school.

The relationship between the two boys warms up. They work together discussing a classroom project on desire. When Marianne finds the strength to go back to work, it is time for Thomas to return to his farm. Marianne goes to bed earlier that night. Damien tells Thomas that he loves him and that he is not afraid of his feelings. Thomas kisses him and they make love.

The next morning Thomas leaves before Damien wakes up. Damien goes to Thomas's farm where they talk about the previous night and their feelings. Thomas is nervous after the birth of his sister and Marianne and Damien accompany him to the happy occasion.

Marianne decides that it is better for her to take a job offer and move to Lyon. She tells her son that Thomas can come and visit, but Damien has his doubts about it. Marianne then tells him that he has to have more confidence in himself and in life. Thomas happily goes down to the slope to see Damien and they kiss.

Tagline: From the director of Wild Reeds and the writer of Girlhood

Based on 0 rating
0 user 0 critic
Did you know? Being 17 was selected for the 21st edition of International Film Festival of Kerala (IFFK). Read More
0 User Reviews
No reviews available. Click here to add a review.
Cast 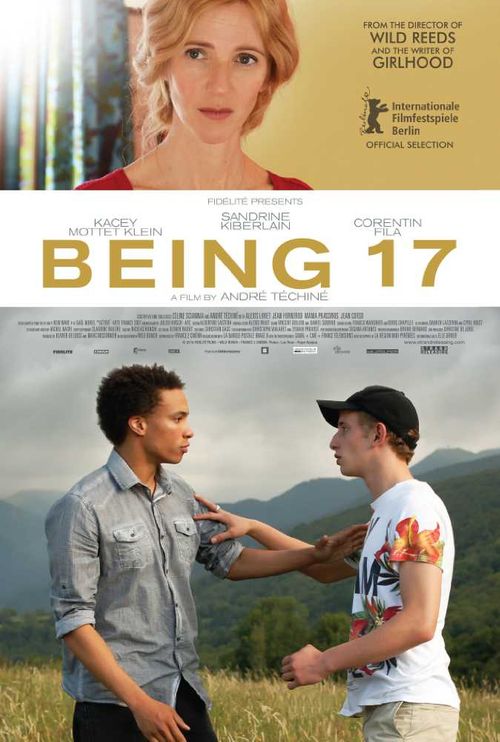