Cancel
This radical fantasy drama depicts the fluctuating fortunes in the life of Craig Schwartz, an unsuccessful puppeteer, who is in a troubled marriage with animal lover and pet store clerk Lotte Schwartz. Despite not being able to earn a living solely through puppeteering, Craig loves his profession as it allows him to inhabit the skin of others. He begins to take the ability to inhabit the skin of others to the next level when he is forced to take a job as a file clerk for the off-kilter LesterCorp, located on the five-foot tall 7½ floor of a Manhattan office building. Behind one of the filing cabinets in his work area, Craig finds a hidden door which he learns is a portal into the mind of John Malkovich, the visit through the portal which lasts fifteen minutes after which the person is spit into a ditch next to the New Jersey Turnpike. Craig is fascinated by the meaning of life associated with this finding. Lotte's trips through the portal make her evaluate her own self. And the confident Maxine Lund, one of Craig's co-workers who he tells about the portal if only because he is attracted to her, thinks that it is a money making opportunity in selling trips into Malkovich's mind after office hours for $200 a visit. Craig, Lotte and Maxine begin to understand that anyone entering the portal has the ability to control Malkovich's mind, which also alters his entire being. This experience makes Maxine fall in love with a composite. This ability to control Malkovich's mind begs the question of the ultimate psychedelic trip for Malkovich himself, who begins to feel that something is not right in the world as he knows it. Will Malkovich ever succeed in regaining control over his mind? How will Craig's future unfold?
See Storyline (May Contain Spoilers)

This offbeat, fantasy drama delves into the adventures of Craig Schwartz (John Cusack), an unsuccessful, unemployed puppeteer and in a forlorn marriage with his pet-obsessed wife Lotte (Cameron Diaz). He gains employment through Dr. Lester (Orson Bean) at LesterCorp as a filer, run out of the strange low-ceiling offices on floor 7½ of the Mertin Flemmer building in New York City.

While settling in he develops a strong love for his co-worker Maxine (Catherine Keener) who does not return these affections. Schwartz, while filing paperwork, discovers a portal behind a filing cabinet, and when he enters it, finds himself in the mind of actor John Horatio Malkovich (John Gavin Malkovich), able to observe and sense whatever Malkovich does for fifteen minutes before he is ejected and dropped into a ditch adjacent to the New Jersey Turnpike. When he reveals the portal to Maxine, they decide to start a business to allow others to experience Malkovich at $200 a head.

When Schwartz explains his new business venture to Lotte, she decides that she must try the portal. Lotte becomes obsessed with the experience, which allows her to live out her transgender desires. While having dinner at Dr. Lester's residence with Schwartz, Lotte finds a room dedicated to Malkovich. One time while Lotte is inside Malkovich, he goes on a date with Maxine. Maxine falls in love with Malkovich (with Lotte inside him), and they continue to see each other in this fashion, including making love to each other. Schwartz, realizing that he has been forsaken by both women, ties and locks up his wife, while he enters into Malkovich's mind and dates Maxine.

Schwartz, drawing on his background as a puppeteer, discovers that he is able to control Malkovich's actions while in his head, and this causes the actor to become paranoid. After consulting with his friend Charlie Sheen, Malkovich trails Maxine to the Mertin Flemmer building, where he finds out about, and insists upon trying, the portal. He finds himself in a world where everyone looks like him and can only say "Malkovich"; he is quickly ejected and meets Schwartz by the turnpike. Malkovich angrily demands that Schwartz close the portal, but he refuses.

As Schwartz enters Malkovich to prepare for the next date with Maxine, Lotte escapes her bonds and phones Maxine, revealing that it wasn't her making love inside John's body but Schwartz; Maxine however has enjoyed her experience and continues her relationship with Schwartz inside Malkovitch. Lotte seeks out Dr. Lester for help. From him, Lotte learns that Dr. Lester is well aware of the portal and has been using it to live on for years after years, changing from one dying body to a younger one each time. When the body is "ripe", the portal moves to its next host. Anyone who manages to enter the portal at the right time when the body becomes "ripe" gets to live on in the body. At the present time, the portal is connected to the body of Malkovich, which is getting "ripe" soon. Dr. Lester reveals to Lotte his plan to use Malkovich as a host for himself and several of his friends. Lotte warns him that Schwartz has become able to control Malkovich and it may be difficult to displace him.

While out on a date with Maxine, Schwartz decides to remain in Malkovich indefinitely. He spends the next eight months in Malkovich's body and through his control of the body, turns Malkovich into a world-famous puppeteer, revitalizing the art of puppetry. Malkovich also gets married to Maxine during this period of time. Eventually, their relationship becomes more distant. Maxine learns that she is pregnant. As the time when Malkovich's body turns ripe and the portal finds its next host draws near, Dr. Lester and his friends capture Maxine and demand of Schwartz that he leave Malkovich's body, threatening to kill Maxine if he doesn't cooperate. Schwartz refuses. Lotte, believing Maxine to be the source of her problems, seeks her out at the Mertin Flemmer building; the two fall together into the portal, travel through Malkovich's childhood memories, and end up being ejected next to the turnpike. Maxine then reveals to Lotte that she conceived when Lotte was inside Malkovich's body. The two fall in love with each other.

After a bar fight, Schwartz decides to leave Malkovich's body voluntarily. Malkovich finds he briefly has control of himself before Dr. Lester and his friends enter the portal, just before the portal moves on to the next host. After Schwartz discovers that Lotte and Maxine have fallen for each other, he uses the portal again but finds himself in the next host which happens to be Emily, the baby of Maxine. Schwartz ends up being forced to watch Maxine and Lotte live happily ever after through the eyes of the child. Later, an aging Malkovich, under the collective mind of Dr. Lester and his friends, reveals to a now aged Sheen a plan to prolong their lives through Emily.

Tagline: Ever wanted to be someone else? Now you can.

Based on 0 rating
0 user 0 critic
Did you know? In a radio interview writer Charlie Kaufman explained that while pitching John Malkovich the story Kaufman was informed, much to his surprise, that Malkovich lived at the time in a Manhattan apartment located on the 7th 1/2 floor. Read More
0 User Reviews
No reviews available. Click here to add a review.
Cast

Octavia Spencer
as Woman in Elevator

Continuity
When Craig first discovers the portal, the hands of the clock on the wall (in the deep storage room) are fixed at 2:23 for several minutes.

Crew/Equipment Visible
When Lotte is chasing Maxine through Malkovich's subconscious, as Maxine drops into the school bus section you can clearly see someone's hand holding her skirt so she doesn't fall into the bus.

Crew/Equipment Visible
When Maxine enters Malkovich's subconscious for the gun chase, when the first smashes into the bedroom through the closet, there is a man in a green shirt on the left side by the chest of drawers. You can see his hands in one shot, then his whole body.

Errors in Geography
When Craig and Dr. Lester are in the restaurant, two orange Los Angeles MTA buses pass by.


When Craig gets spit out into a ditch for the first time, he is limping onto an on-ramp, a sign that reads "DOCK STREET NEXT RIGHT" is visible at the distance, suggesting a filming location at Terminal Island Freeway in Wilmington California.
Trivia:
In a radio interview writer Charlie Kaufman explained that while pitching John Malkovich the story Kaufman was informed, much to his surprise, that Malkovich lived at the time in a Manhattan apartment located on the 7th 1/2 floor.

John Malkovich was approached about this film several times and loved the script, but he and his production crew felt that another actor would fit the role better. Malkovich offered to help produce the film, and aid Spike Jonze in any way, but refused to star in it. Eventually after a couple of years Malkovich's will was worn down and he agreed to star in the film.

The scene when a can is thrown at John Malkovich's head is real. John Malkovich has described how Spike Jonze wanted to cut it due to running late that night expecting that no one would be able to hit him on the head with a half-full can of beer from a passing car, when about 70 or 80 sets of hands shot up on the crew saying that they would like to try. Eventually the task fell to John Cusack's writing partner and he nailed it on the first try.

Director Spike Jonze claimed in an interview that when he was shopping the screenplay around Hollywood, at least one unspecified producer asked if he could possibly rewrite the film as "Being Tom Cruise".

Willie Garson (Guy in Restaurant) improvised the scene where he encounters John Malkovich and says, "You were really great in that movie where you play that retard." According to Garson, director Spike Jonze had instructed Garson to use the word "retard" as many times as he could.

Charlie Kaufman sent the screenplay to Francis Ford Coppola after he wrote it. Coppola liked it very much and showed it to his daughter's husband, Spike Jonze. Jonze liked the screenplay so much that he approached Kaufman about directing the movie.

In a 2009 Hanes commercial, Charlie Sheen is driving a car with the license plate "MASHEEN". This is reference to the scene in which Malkovich and Charlie Sheen trade affectionate nicknames: Malkovich: "Ma-sheen!"; Charlie: "Malkatraz!"

Steve Oedekerk was sent an early draft of the script in 1989, and upon reading it, immediately arranged a meeting with Charlie Kaufman. Oedekerk told him he thought it was the most brilliant script he'd ever read, but also that he was certain it could never be made.

The original script has Kevin Bacon in place of Charlie Sheen, as Malkovich's actor friend.

Craig discovers that LesterCorp is on the 7 1/2 floor of the Mertin Flemmer building by seeing a "7 1/2" on a building directory in the lobby - at the 7 1/2-minute point of the film. 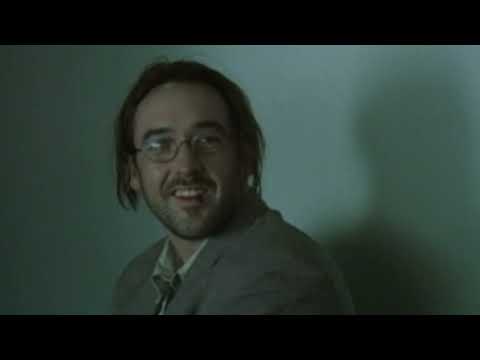