Cancel
Embedded with laughs, this offbeat drama revolves around the fluctuating fortunes of four youngsters, Surya, Manu, Neethu and Dia, Surya is Vinayaka Naickar's stepbrother, and as he's very wealthy, he funds Surya's life and helps them out in trouble. Manu is Surya's friend, who dreams of becoming a filmmaker, but when the funds they have taken on loan from a loan shark at high interest for the movie is stolen by the production assistant, chaos unfolds. Surya decides to help Manu by helping him retrieve the funds. In order to get the money from Vinayaka, he tells them that it is for his marriage. This sparks a complex sequence of events filled with confusion and chaos. Who is Surya "married" to? Will they succeed in duping Vinayaka?
See Storyline (May Contain Spoilers)

Surya is Vinayaka Naickar's stepbrother. Vinayakan is very rich; Surya is struggling to make a living. Vinayakan sends some amount every month to Surya and that's how he survives. Manu is Surya's friend who dreams about becoming a filmmaker.

One day Manu meets star Mammootty on the set of a movie shooting and tells him that he has a story which he plans to make as a movie. Mammootty listens to the synopsis and tells Manu to call him once the script is ready. Since Manu got the dates from a super star like Mammootty, he plans to make the movie soon and looks for finance. Manu introduces Surya as the producer and lends money from a lender called Bhasi at a very high rate of interest. The production assistant runs away with that money.

Surya has to repay that money and he has nothing with him. So he lies to Vinayaka that he got married and he needs cash. Vinayaka says that he is busy to come but will send the money. Surya's even introduces his girlfriend Neethu as his wife to Vinayaka's advocate Uthaman.

Later, when Neethu is in Bangkok with her father, Vinayakan comes to meet the couple. Surya, out of desperation, asks Diya to act as Neethu. While things seem to be working out, Neethu comes back from vacation and further confusions arise. Now, Neethu has to act as Manu's girlfriend. They appoints a servant called Thamara at their house but Surya has to introduce her as the sister of Neethu to Vinayakan. She creates all sort of problems for Surya and Manu.

Surya and Manu has to tell all sorts of lies to hide the truth but the truth finally surfaces. At that time, it turns out that Vinayakan was aware of what was happening and Thamara was his wife, whom he sent to their home in advance to get the facts.

Finally Manu makes Surya's story as his script and makes a movie in which Mammootty plays the real-life character of Vinayakan. The movie ends when Vinayakan congratulates Mammootty for his acting skills after the final scene in the movie.

Based on 0 rating
0 user 0 critic
Did you know? The song "NaNa" which was featured in the trailers of this movie, was apparently composed by A. R. Rahman for an American film, Couples Retreat (2009). Read More
0 User Reviews
No reviews available. Click here to add a review.
Cast

Distributor
A and M Entertainment Company

The soundtrack of this movie was composed by Indian rock band Euphoria. 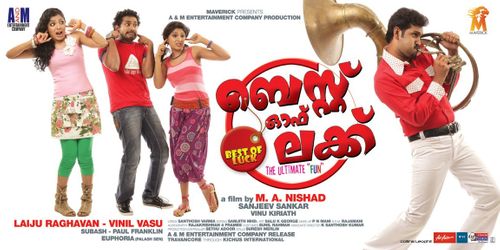