Cancel
An orphaned baby is saved from drowning by the chieftain of a tribal community. He grows up to be a brave warrior and falls in love with the princess of a powerful kingdom, whose life is under threat from an evil sorcerer. Can he save his beloved's life? What is his true identity and lineage?
See Storyline (May Contain Spoilers)

Jayachandra Maharaja (Vijay Kumar) of the Chandraprabha Dynasty deserts Vasundhara (K. R. Vijaya), a woman who gives birth to his son. Vasundhara, loses the child in a cyclone while crossing a river, and is about to drown when she is saved and brought to a hermitage.

Vasundhara, on learning of the loss of her son attempts suicide. Concerned, Jamadagni creates a mystical flower on a bush, and tells Vasundhara that the flower will be in fresh and in bloom as long as her son is alive and well. Meanwhile, the child is found by tribals and taken to their village, Kotala Kona. The village chieftain and his wife adopt the child and name him Vijay (Nandamuri Balakrishna).

Once Vijay and Kondanna (Babu Mohan) go in search of a tree of water, which gives immortality. From there Vijay hears a song by a princess Padma Devi (Roja Selvamani) in a Vasanta Vanam (Garden). He admires her beauty and escapes from the scene. The soldiers report this incident in the court of Brahmananda Bhupati (Kaikala Satyanarayana) of Kartikeya Dynasty. Vijaya intrudes into the castle to the see Padma secretly. He speaks with Padma and escapes from the king's castle successfully with his sword fight skill. As a result, Padma falls in love with Vijay.

In a very far away Island, Bhairava, a wizard – who aims at winning immortality, is performing kshudra puja for the giant sculpture of dark goddess. Wanting to sacrifice a virgin's blood for the dark goddess, at a night, with his magic, he brings Padma, along with the bed, to the Island. In the trance Padma gives a word to the dark goddess that she will come back on the next full moon day for her offering. The same night, Bhairava sends Padma back her castle.

When Brahmananda Bhupati reveals that Padmani had taken ill, Vijay unchains himself and meets Padma in the castle. Padma reveals what happened at that full moon night. Vijay escapes from the chase of soldiers, but falls unconscious at a place near Jamadagni Ashram. Vasundhara and few men see Vijay lying in an unconscious condition.

After the death of the Queen, Uttar and Dakshin grab the throne of Chandraprabha Dynasty, by leaving their father alone in a desert.
In Jamadagni Ashram Vijay comes out from unconsciousness. Vasudhara and Vijay find themselves unable to recognize each other. Vijay reveals that an attempt to assassinate the princess Padma is going to take place during the night of the full moon.

Vasudhara blesses Vijay, by tying a magical rope to his arm. The mysterious fog comes again into the castle to put all into unconscious. Vijay sees Padma magically flying into the air and being transported elsewhere while still lying in her bed.

He jumps and hangs onto the side of the flying bed. He is pulled down by some roots which come up from a cave near the Island of Bhairava. Vijay slays the roots which results a hermit cursed nymph to regain her form. As a token of gratitude, the nymph blesses Vijay with a magical ring and reveals that Bhairava is about to sacrifice Padma on the night of the full moon.

Bhairava sends a two headed dragon to stop Vijay taking Padma onto the bed and sets it flying towards safety. The dragon separates Vijay from the bed, but the bed reaches the castle. Vijay kills the dragon in the air. The dragon bursts out and Vijay is dropped down into the sea.

A couple of naughty devils (Suthi Velu) and (Kovai Sarala) finds Vijay falling unconscious on the desert shore of the sea. With there are magical powers, the devils bring Vijay to consciousness. Their story was that they were devils in the court of Bhairava. They stood against the evil sorcery, as punishment for which Bhairva stuffed them in a bottle and threw the bottle at the shore of the sea, sharing a border with the desert. They were set free when a blind man had kicked the bottle.

To feed the hungry blind man, they grab the fruits from Tuumburadeva (God of music) temple. When the blind man is about to eat the plate of fruits, a white flying horse prevents him eating by kicking the plate. Thence the devils are making him to eat, but the horse is preventing him to eat by kicking the plate. The devils plead with Vijay to convince the horse to leave them in peace and allow the blind man to eat the food, so that they can repay their debt and leave.

Vijay, with his art of music convinces the horse. When Vijay is finally successful in appeasing the horse, the blind man regains his previous form of king. The naughty devils reveal to Vijay that Sata-ratna (100 gem) Necklace found in Yakshini Loka, would protect Padma from the threat of Bhairava.

Vijay directs the king to Kotala Kona. Brahmananda Bhupati announces that he would give half of the dynasty along with his daughter in marriage, to the one who saves his daughter. As directed by the naughty devils Vijay travels towards the east and reaches Yakshini Loka, where he meets Lilliputs. In a comic incident Vijay saves Lilliputs. The Lilliputs help Vijay to reach Yakshini Loka and guide him to the locked room in which the necklace is placed.

A Yakshini (Rambha) begins to dance in an attempt to seduce Vijay, whilst the Lilliputs begin to find the key for opening the door. However, Vijay maintains his equilibrium and finds the key tied to the ankle of the Yakshini.

He feigns falling for her charms, while the Lilliput steal the key. Vijay enters into the room after facing many hurdles and obstacles, and then enters a room of glasses. In the room of glasses he fights with a dreadful monster, which has life in the glasses. The box encasing the necklace appears to Vijay, who kills the monster by breaking the glasses. the Yakshini curses Vijay who is rushing out with the necklace.

As a result of the curse Vijay totally loses his handsome looks and turns into a very ugly man. Yakshini reveals that the necklace will lose its power if either it is thrown away onto ground or if Vijay reveals his true identity to anyone.

On the night of another full moon, Vijay, in the form of an ugly man, enters the castle with the necklace and pleads Padma to wear it. Padma and others could not recognize who the ugly man is. Accepting his request in panic, Padma wears the necklace, which drives off the death fog from entering the castle.

He returns to the Bhairava Dweepa on the white horse to save Padma from the sacrifice. In the fight Vijay slays the head of Bhairava with the sacrificial sword. Bhairava dies and it results in the collapse of the dark goddess, and causes the cave to disintegrate.

Vijay escapes out with Padma. The nymph appears again and transforms into the form of his mother. Vijay reaches the castle with Padma. The movie ends with the happy marriage of Padma with Vijay and the union of Chandraprabha Dynasty and Kartikeya Dynasty.

B Padmanabham
as Mattepa Shastri 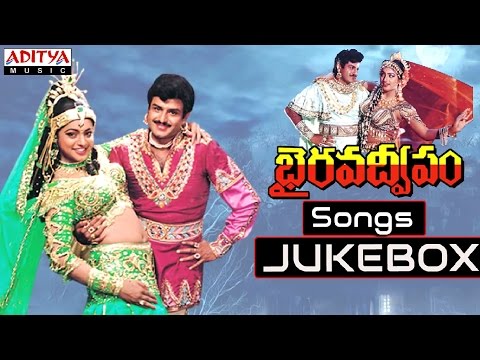