Cancel
When an newlywed American couple goes to India on their honeymoon, little do they realize that they were about to go on the adventure of their life time. A ruby, back from the ages of the Indian Maharajas has been stolen and placed in the backpack of the Americans. When the bad guys realize this, they kidnap the wife.. Now the husband and his Indian friend (played by a famous Tamil Indian actor) must go out to save the wife. But along the way, they are confronted with many challenges, like the Indian bad guys who steal the ruby from them!
See Storyline (May Contain Spoilers)

In 12th Century India, a huge ruby was bestowed with the power of good and the curse of evil by the spilled blood of Princess Lafla. In the 18th Century, the British stole it. In today's India, small-time crook Paul Lorre steals the stone back, but while attempting delivery to international fence Ludwig Van Hoeven, realizes the authorities are onto him and slips the priceless gem into the baggage of the unsuspecting Sandy and Stephanie McVey, Lorre manages to indicate the American couple and their streetwise taxi driver Shyam Sabu (Rajinikanth) to Van Hoeven's thugs. Sabu realizes that he is being followed, but he does not see the huge ruby fall into a crevice inside his trunk while dropping Sandy and Stephanie at their hotel. Soon Sandy and Sabu are both in action; Sandy in a brutal fight with two thieves ransacking his room and Sabu in a life-or-death car chase and shootout.

Stephanie gets kidnapped by Van Hoeven's thugs. Van Hoeven contacts Sandy and proposes Stephanie in exchange for the gem at the waterfalls on the road to Bangalore. Without the ruby, Sandy has no option but the police, but Sabu produces the stone, igniting a vicious fight between the two equally matched men, ending in a second agreement. Sandy will pay well, but the ruby is his to exchange for Stephanie's life. They prepare for a conflict while Sabu lets his heathen friends know that their help may be needed. At every corner, the bungling Ramesh is attempting to keep up with the furious pace, always managing somehow to fail. Sandy and Sabu are ambushed while exiting the rain forests but survive the shootout and capture two of Van Hoeven's men, learning of the lone secret passage before tossing them over the waterfalls.

Van Hoeven is giving a festive, lavish party. But Sandy and Sabu have penetrated the palace with plans of their own, when they... drop unexpectedly. The ruby proves to be a fake and they are moments from execution when Sabu's heathens storm the fortress and a bloody mêlée ensues. Sandy, Stephanie and Sabu escape directly into the gun barrels of Ramesh's men. They are clean, Van Hoeven is arrested and Inspector Ramesh is a hero... but the Bloodstone is still missing.

Based on 0 rating
0 user 1 critic
Did you know? This is the first and only English-language movie in which Rajinikanth has played a pivotal role. Read More
1 Critic Review

Bloodstone is awkward from the start and just seems to get worse as it goes on.
Amie Cranswick, Flickering Myth
0

The movie marks the Hollywood debut of iconic Tamil actor, Rajinikanth. However, despite the hype caused by this, the movie failed at the box office.

This is the first Hollywood movie to be largely filmed in southern India. 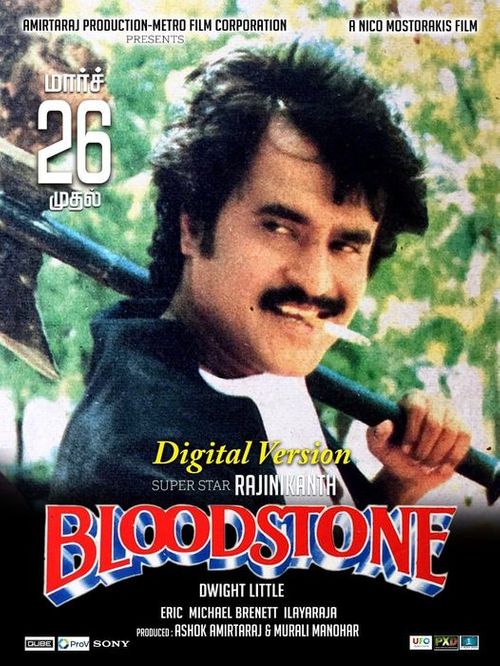 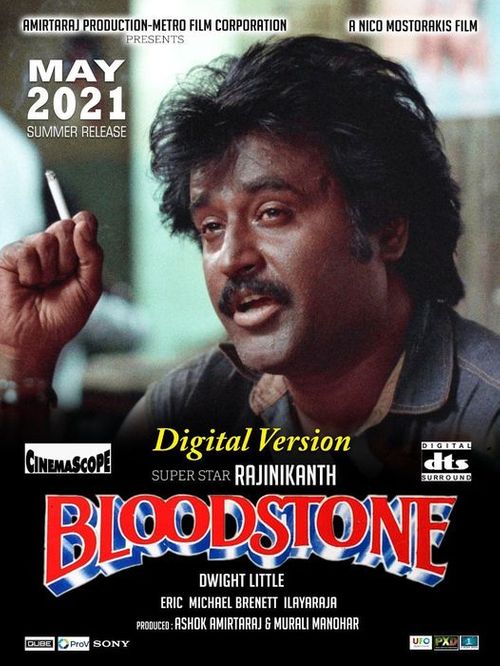