Cancel
Set against the placid backdrop of rural Iowa, this contemporary comedy revolves around one woman's all-consuming ambition for fame and attention. A gentle and laid-back man, Bob has won the state fair's butter-carving contest 15 years running. Automatically, his tightly-wound and hard-charging wife Laura nurtures dreams of Bob becoming governor, so when the contest organizers ask him to step aside so others can win, she's furious. However, when Bob magnanimously agrees to retire, she decides to enter herself. In the county contest. It isn't going to be easy, for she has stiff competitors in Destiny, an African-American foster child, and Brooke, a prostitute Bob hasn't paid. When things don't go Laura's way, she enlists the help of Boyd, an old boyfriend. Laura's step-daughter and Destiny's foster parents are in the mix as things heat up at the state fair. What are Destiny and Laura's destiny?
See Storyline (May Contain Spoilers)

A tale of competition at its most cut-throat, this feisty contemporary drama surveys the raw ambition of Laura Pickler (Jennifer Garner), the wife of Bob Pickler (Ty Burrell), Iowa's long-reigning champion butter carver. For 15 years, Laura has relished her high-profile role as the beautiful, loyal helpmate to her affable, artistically gifted husband.

However, when Bob is pressured to retire and allow someone else a chance at glory, an indignant Laura decides to enter the competition herself. She is first in line on sign-up day, only to see her odds of victory fall below 100% with the arrival of an unlikely yet formidable contender: 10-year-old Destiny (Yara Shahidi), the African-American foster child of local couple Julie and Ethan (Alicia Silverstone and Rob Corddry).

And that's not all. Bob's would-be mistress, bad-girl stripper Brooke (Olivia Wilde) also declares her candidacy, as does his #1 fan, Carol-Ann (Kristen Schaal). Facing three opponents, mocked by her step-daughter Kaitlen (Ashley Greene) and furious with her husband, Laura resolves to do whatever it takes to win. And if that means resorting to sabotage - and recruiting her dim-witted former boyfriend Boyd (Hugh Jackman) as a co-conspirator - then so be it.

Tagline: A comedy about sex, power and spreading the wealth.

Based on 0 rating
0 user 0 critic
Did you know? This was the first film produced by Jennifer Garner's production company, Vandalia Films. Read More
0 User Reviews
No reviews available. Click here to add a review.
Cast

Factual Mistake
You cannot handle butter sculptures with your bare hands - that's the temperature at which it melts.
Trivia:
This film premiered at the 2011 Toronto International Film Festival

This was the first film produced by Jennifer Garner's production company, Vandalia Films.

The screenplay is the debut of Jason Micallef. He submitted a draft of the script for a Nicholl Fellowship with the Academy of Motion Picture Arts and Sciences in 2008 and won.

This film is said to be a satire of the 2008 Democratic presidential primary.

Initially, Jim Carrey was slated to play one of the lead roles.

In the scene where Laura and Bob talk in the Pickler family carving cooler, in the background there is a butter sculpture of a man pointing. That is a replica of the statue of Green Bay Packers' legendary coach, Vince Lombardi, that is outside the atrium entrance to Lambeau Field.

Kate Hudson was set to play Brooke, but dropped out to do Something Borrowed (2011) instead. She was replaced by Olivia Wilde. 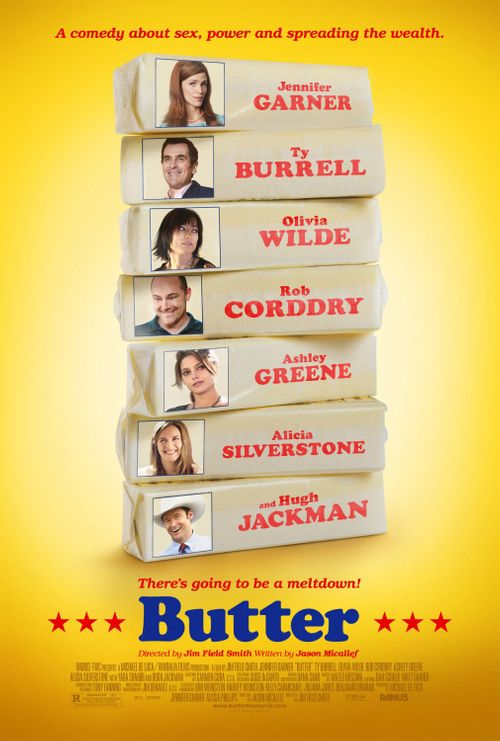