Cancel
A priceless diamond is up for grabs. An amazing heist has taken place. The payment is made. The buyer is waiting. Then things go horribly wrong. Marked notes lead to a trail of cold blooded murder and ruthless double cross. As treachery rears its ugly head. The game turns vicious. First everybody was fighting for the diamond. Now they're fighting for something even more precious - their lives. The rules of the game are clear - the winner will take it all. The loser will lose it. Even his life. Nobody's to blame but everyone will play the price.
See Storyline (May Contain Spoilers)

The film opens with Danny (Zayed Khan) boarding an plane. A girl named Ria (Ayesha Takia), enters the flight, talking very loudly and rudely to a somebody on her phone, irrationally arguing as to why people should not travel on aeroplanes. She even mistreats the cabin crew and casually asks Danny to put something in her bag. Seeing an opportunity to talk to her as they are both alone in the business section of the flight, he introduces himself as Dhananjay Jumbevalkar and craftily manages to engage her in a conversation and they decide that over the course of the journey, he will tell her a story of three unique diamonds worth 200 carats each.

The story begins in 1836 where a miner in Southern India finds a diamond as he mines coal. The miner gives the diamond to his king, who in turn gives it to an English Viceroy. However, the ship in which the Viceroy is travelling sinks and the diamond, too, is lost at sea. Many years later, the diamond is found by a fisherman in Bulgaria, who gives it to the ruler. The ruler decides to give two pieces of the diamond to his two sons but one of them looses it by gambling and the other is killed by an unidentified man, who steals it from him. Many more years later, the diamonds resurface again in 1994 where a gangster sells the two pieces to a man known only as Uncle. However, they are unaware that there was a third piece, which has surfaced only recently.

A businessman calls the Indian Intelligence Unit in Cape Town, South Africa, and asks for protection as he takes something valuable, most probably the diamond, from one place to another. Shanaya (Shamita Shetty) is assigned to the case. However, in transit, the diamond is stolen by henchmen working for a Chinese gangster. Their rival, Uncle, another influential gangster, wants all the diamonds for himself. One of Uncle's trusted aides, Angad (Sunil Shetty) had been shot and betrayed by the former into going to prison. Now, as he is released, he volunteers to steal the diamond for Uncle, who does not trust him. Angad meets his old partner Aditi (Dia Mirza), for the job and asks her to provide a team of the quickest, fastest and most unbeatable, thieves ever. Aditi decides to meet Doc (Ajay Devgn), the leader of a gang of thieves in relation to the job. Doc had been an engineer who specialised in making weapons. He has no real name or identity. Doc is also masquerading as Karan, a writer, who is Shanaya's boyfriend, with her being unaware of his true identity.

Doc recommends two people for the job. The first is Lucky (Ritesh Deshmukh), an expert on skateboards and parachutes. The second person is Danny (Zayed Khan), an expert in water sports. However, the two hate each other to the core and always, often comically, find themselves in the same place, completing the same heist. However, to keep both of them at bay, Doc, hires Pooja (Esha Deol), another thief who worked with Danny and Lucky as a partner, and with whom both of them were in love at a given point of time. Pooja barely manages to keep them both at bay as they try to meet her, once again, at the same time. The plan is laid out. Lucky would walk into an art exhibition and steal a painting, escaping on the road. Lucky is then asked to throw the painting into the water at a stipulated point, where Danny would pick it up and deliver it to a yacht, belonging to Uncle. Lucky and Danny would both be given 2 million dollars for the job, each. At the same time Doc would steal this money from a convoy belonging to an unknown drug lord named Hafeez Bhai.

The plan works as per requirement and all the three stages are successful. However, this heist only turns out to be a distraction as Angad's men chase Danny through the water as he escapes with the package and the armoured convoy Doc is robbing turns out to be a cover for a police team headed by Shanaya, setting out to stop Uncle's deal with another gangster, for the two pieces of the diamond they had. These pieces, along with the money for the diamonds is stolen by Aditi during the confusion, created by Danny's arrival, while Angad, who wants the diamonds for himself, betrays Uncle, kills him and his men and escapes from the yacht. Aditi then uses the money she stole to make the deal with the Chinese gangster who had stolen the last and final piece, thus acquiring all three pieces However, it is later revealed that the money that Doc had stolen from the convoy was marked, thus meaning that the effort Doc and his team had undertaken (unknown to them) had come to nothing. Angad had set them up, knowing well that the armoured convoy was a police team. The men chasing Danny were a distraction to keep Uncle's guards busy while Angad betrayed him and escaped. Aditi had made the deal for the last piece of the diamond, going in place of Shanaya. She is unaware of Angad's true motives, thus she is set up as well after the Chinese Mafia she made the deal with is caught and reveals all the information about her.

Doc then books a yacht which he pays for with the marked money, for a birthday party for Shanaya (he plans to propose to her). Over phone, Shanaya informs him that the money was marked and had just been spent for a party on a yacht. He rushes back, just in time, to prevent the manager of the yacht from revealing his real identity to her. Later on, the police have used the information on Aditi and have already made sure that she does not leave the country with either the diamonds or the money. Doc, who has realised that the job was a set up, calls Aditi and informs her that the police have information about her, including the number of the flight she was supposed to be leaving the country on, all the time expressing anger that she had trusted someone like Angad. Aditi hides the diamonds in her car, confronts Angad, who does not deny setting her up along with the others, and escapes to a casino, where she runs into Lucky, who is there to spend the money to gamble. While they collide with each other, she discreetly exchanges her car keys with his, before being captured by Angad, who shoots her dead after a further confrontation. Doc, finding Aditi dead, gets a call from Angad, who demands that his diamonds be given back. Danny, who is at the airport with Pooja, gets a call from his friend, to whom he had given his share of the money to send to India, informing him that the money is marked. Sensing Pooja's desperation at this fact, he goes with her to save Lucky, who escapes with their help after a car chase and a gun fight. The trio then get together and confront Doc, who denies knowing where the diamonds are, saying that they were in Aditi's car, all the time unaware that Lucky has it.

After a bomb scare which was supposed to kill Shanaya, Angad now gives Doc a limited amount of time to give him the diamonds. The group first save their skins from Shanaya and the police. However Shanaya is captured, and is being led away in a convoy, with a separate one containing the car, which contained the diamonds, and which had been taken away as the group had realised it. Doc and Lucky intercept the second convoy, acquiring the car, while Danny and Pooja intercept the first, saving Shanaya's life. Doc, Lucky and Danny, then go to confront Angad. While Danny and Lucky beat up Angad's henchmen, Doc confronts Angad and shoots him dead for his betrayal of Aditi.

It is here that the flight lands and Ria and Dhananjay exit the plane to be met by the members of the group, including Doc. It his revealed by Doc here that "Ria", was actually Preeti, a new member in their group. Dhananjay now laughs at the fact that she knew him to be Danny all along. At this, Shanaya arrives, apparently still unaware of Doc's real identity. Smiling, the group then leaves the airport while Doc muses to Shanaya about another diamond in a nearby museum, possibly hinting at another heist.

Based on 0 rating
0 user 0 critic
Did you know? The song "Naughty Naughty" was shot in a single take. Read More
0 User Reviews
No reviews available. Click here to add a review.
Cast

The song "Naughty Naughty" was shot in a single take.

Esha Deol insisted on doing her own action scenes, refusing a stunt double. She underwent training with an expert in Cape Town.

The film was originally to be a sequel to Dus (2005), entitled Gyarah. 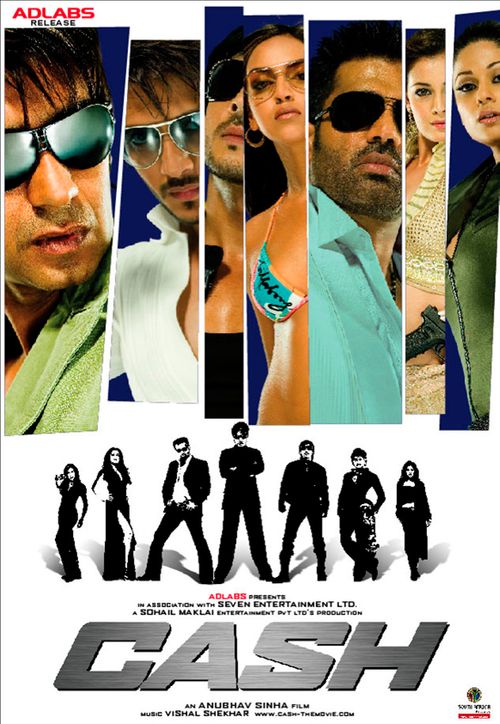