Cancel
A millionaire is found dead of heart failure handcuffed to the bed with a home video tape of him and his lover. When cocaine is found in his system, and his will leaves $8 million to his lover, they arrest her on suspicion of murder. Her lawyer succumbs to her charms, and he begins a torrid and kinky affair with her. As new evidence turns up during trial, he begins to wonder if he's defending a murderer.
See Storyline (May Contain Spoilers)

Elderly Andrew Marsh is found dead in his bed in what looks to be murder, as a non drug using Andrew was found with cocaine in his system, which exacerbated the medical issues surrounding his heart condition. Rebecca Carlson, Andrew's much younger girlfriend, is on top of the suspect list. She hires a lawyer, Frank Dulaney, before she is even questioned or charged by the police. But she is eventually charged. Key to the case is motive, with Rebecca standing to inherit Andrew's $8 million fortune (which she states she being named his primary beneficiary she knew nothing about). The case also stands on Rebecca and seemingly Andrew's "aggressive" sexual behavior, which included BDSM, with most believing that Rebecca was trying to "screw" him to death. This brings into question Rebecca's past relationships, as well as the behavior of those around Andrew, such as his personal secretary Joanne Braslow, who would like to see Rebecca convicted more than anything. As Frank begins to work on the case, he gets lured into Rebecca's seduction and the thought of entering into the world of BDSM with her, despite he being happily married. This personal relationship with his client provides additional motivation to help her get acquitted, which he feels is his job anyway despite her guilt or innocence.

Based on 1 rating
0 user 0 critic
Did you know? Madonna's character doesn't remove her shoes in any of the three major sex scenes, except very briefly to smash a lightbulb with her heel. Read More
0 User Reviews
No reviews available. Click here to add a review.
Cast

Continuity
When Frank is shocked by the burn marks on his body, the marks don't correspond with where Rebecca poured the candle wax the night before.

Continuity
During a close up of Frank's stomach, the amount of candle wax on his chest is far greater than the amount Rebecca originally poured.

Continuity
When Rebecca attempts to handcuff Frank, Frank grasps her right wrist with his left hand. In the very next shot, it is his right hand that is holding her wrist.

Continuity
When Rebecca picks up the bottle of champagne from the ice bucket, she puts her left hand on Frank's right hip to maintain her balance. In the next shot her hand is on his left hip.

Continuity
When Frank approaches Rebecca as she is lying on the bed and takes off his shirt, the cuffs of the shirt are suddenly unbuttoned (presumably so it would be quicker for the actor to remove), when they were buttoned previously.

Continuity
The kitchen of the busy restaurant where Sharon works has nobody working in it when she runs out.

Continuity
When Frank handcuffs Rebecca, there is a wide shot in which Rebecca is clearly gripping a rug. However, during close-ups of Rebecca's hands, the rug is nowhere to be seen.

Continuity
When Frank follows Rebecca to her bedroom, there is a shot from Frank's point of view of him parting the curtain to see Rebecca lying on the bed. In the next shot, a close up of Frank, he parts the curtain again.

Continuity
After Frank pops open Rebecca's bra, and she runs away from him, in the close-up shot Frank turns to his left to follow her, in the very next shot, Frank is turning to his right.

Crew/Equipment Visible
When Frank confronts Rebecca at her house, the boom mic operator is briefly seen reflected in the mirror in Rebecca's bedroom.

Factual Mistake
DA Garrett claims that Rebecca's inheriting eight million from the dead man is "probable cause." Legally, it is "motive".

Factual Mistake
Dulaney has the medical examiner's statement stricken from the record, then proceeds to ask him about it under cross-examination.

Revealing Mistakes
When Rebecca breaks a light bulb in the parking garage with her shoe, the glass that falls on the car below is heavier and thicker than any glass from a light bulb.

Revealing Mistakes
When Sharon slaps Rebecca, her hand doesn't come anywhere near to connecting with Rebecca's cheek. Yet we hear the sound of a slap, and Rebecca reacts as if she has been struck.
Trivia:
Although this movie is castigated for its similarities to 'Basic Instinct', the shooting was in fact completed before 'Basic Instinct' was released, so the similarities are purely coincidental.

For this film, Madonna personally selected Willem Dafoe as her co-star.

Madonna's salary for this movie was higher than all the other actor's combined.

Neither Madonna or Willem Dafoe had a body double for any of the sex scenes in this film.

In a radio interview with Sway Calloway, Willem Dafoe confirmed that the scene in the parking garage is genuine, no body doubles were used.

In interviews, Madonna stated that she found filming the sex scenes "scientific, not sexy at all", but co-star Willem Dafoe admitted that he was "turned on despite himself" while filming the scenes.

Madonna's acting coach quit just before production began, claiming that "she thinks she knows everything".

The 'hot wax and champagne' scene was included in UK Channel 4's list of the '100 sexiest movie moments'.

Madonna's character doesn't remove her shoes in any of the three major sex scenes, except very briefly to smash a lightbulb with her heel.

Madonna had five personal assistants for this film, including her own hairstylist, make-up artist and personal trainer.

Earlier Gabriel Byrne was considered for the role of Frank Dulaney.

The cuffs that Frank wrestles from Rebecca and uses to manacle her, are in fact 'legcuffs' and not 'handcuffs'.

Marie-Christine Darah, the actress who provided her voice to Madonna in French, revealed in an interview that it was Madonna herself who imposed her to dub her.

John Wilson's "The Official Razzie Movie Guide." lists this film as one of "The Ten Best Bad Films ever made."

Patricia Cornwell wrote a novel with the same title, she successfully lobbied for a disclaimer in film's trailer and advertisements, saying the film had no connection to her novel.

Included in film critic Roger Ebert's 2005 list of his most hated films.

This film was nominated in all the major categories at the 1993 Razzie awards, although Madonna was the only person to "win", in the category of worst actress. 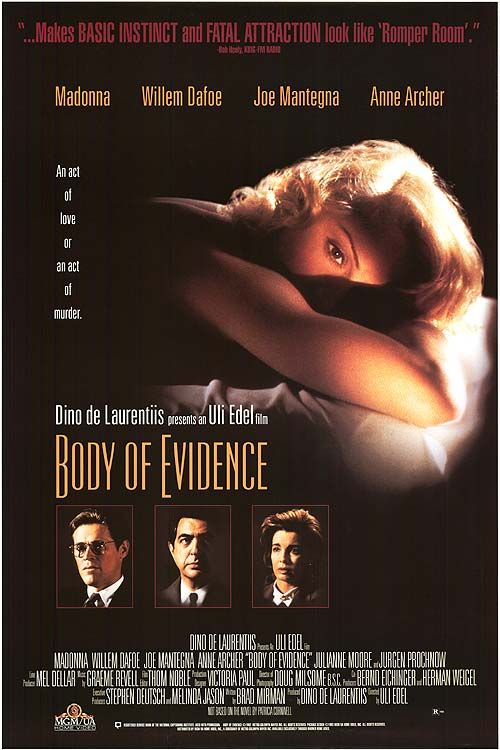