Cancel
'Brindaavanam' is a family oriented commercial entertainer that highlights the unique culture and traditions that prevail in villages, and delves into the need for harmony and unity within families. Krish (NTR) is the son of a billionaire businessman (mukesh Rishi). He has a girl friend Indu (samantha) whom he sincerely loves. Her friend Bhoomi (kajal) wants to pursue her higher studies and lands in trouble when her father (Prakash Raj) wants to marry her to his nephew (Ajay). Her grandfather (Kota Srinivasa Rao) convinces her dad, saying that she already likes someone in the city, so her dad asks her to bring her lover home. Indu asks Krish to go as Bhoomi's Lover. Meanwhile, Bhoomi's uncle (Srihari), and her father (Prakash) live apart in two adjacent villages. The two families are feuding with each other. Krish is hated by Bhoomi's entire family and he has to overcome many things in his attempt to get everyone to love him. In the village atmosphere, Krish is for the first time exposed to life amidst an extended family, and involves himself in changing the attitudes and creating unity amongst them. However, how will the families react when the truth about Krish is revealed? Will Krish succeed in unifying the feuding families and create harmony? What will happen between Krish, Bhoomi, and Indu?
See Storyline (May Contain Spoilers)

Krishna alias Krish (N. T. Rama Rao Jr.) is the son of a multimillionaire in Hyderabad (Mukesh Rishi). He is in a relationship with Indu (Samantha Ruth Prabhu), who has a friend Bhoomi (Kajal Aggarwal). Bhoomi's father Bhaanu Prasad (Prakash Raj) wants to get her married to her cousin suitor (Ajay), who is a rowdy, which Bhoomi doesn’t like. Naturally, her grand father Durga Prasad (Kota Srinivasa Rao) tells to the family that she has already fallen in love with a guy in the city to halt the marriage. But, Bhaanu Prasad asks Bhoomi bring her boyfriend home with her. Indu sends Krish as Bhoomi's lover just to let her escape the wedding situation.

Upon arriving in Bhoomi's village, Krish learns through Bhoomi about everyone in her family. He thinks that the people in her home are living as individuals and not as an actual family with bonds and emotions. Krish changes the attitudes of Bhoomi's uncles who are lazy at home doing nothing, and successfully wins the heart of family numbers. Then Durga Prasad reveals to Krish that Bhaanu Prasad and his step-brother Sivudu (Srihari) have been rivals for twenty-five years. This is because Durga Prasad married a second time when his first wife died, against Bhaanu Prasad's wishes, and Sivudu is born to the new couple. This is the reason for Bhaanu Prasad's hatred towards Sivudu. Upon splitting their inherited wealth in half, the two brothers have their father Durga Prasad live in each of their households for six-month periods. Krish decides to reunite the two brothers, and succeeds, much to the happiness of the two families.

Bhaanu Prasad, impressed by Krish, accepts Bhoomi's love and decides to get them married. This worries Krish and Bhoomi as the initial plan was to only cancel the marriage of Bhoomi and her suitor, not to have Bhaanu Prasad accept their "relationship". Bhoomi's suitor, our of lust for Bhoomi and anger on the wedding's cancelation, vows to get Bhoomi by any means. The story takes a turn when Indu, who is none other than Sivudu's adopted daughter, arrives in the scene. Sivudu decides to get Indu married to her lover alongside Bhoomi's marriage, not aware of Krish's real identity. Indu then lies to Sivudu that her lover has ditched her, in order to save Krish's act. Sivudu orders his men to find Indu's lover's a.k.a. Krish's parents and bring them to him. Bhaanu Prasad also asks Krish to bring his parents to settle the marriage alliance. Indu sets up a fake father (Brahmanandam) and mother for before his parents arrive at the place. But when Krish's parents arrive at the scene, they are shocked to see Krish there (who they thought was on a world tour). Krish explains them the whole situation and has them play the game.

Bhaanu Prasad engages Bhoomi with Krish and tells them to decide when they want to marry. Just as when Krish thinks that all is settled and prepares to walk out of Bhoomi's life, Bhoomi reveals that she has fallen in love with Krish, which Indu overhears. Fate takes another turn when Bhoomi's suitor finds out about the real identities and reveals this to Sivudu, who confronts Indu. Bhaanu Prasad too learns of the act and, along with Sivudu, beats up Krish before Durga Prasad intervenes. Durga Prasad reveals to them that the act was created by him in order to save Bhoomi from her ruthless suitor. He also reveals that Krish did not cheat Indu (which is what Sivudu thinks), and in fact it was Indu who sent Krish. He also reveals to Bhaanu Prasad that Bhoomi is also in love with Krish.

Just as things cool down, Bhoomi's suitor takes Bhoomi away by force, only to be chased by Krish. Krish finally beats up Bhoomi's suitor into submission and leaves with Bhoomi. But another problem arises when Krish has to decide between Indu, whom he loves, and Bhoomi, who loves him. Suddenly Lord Krishna (portrayed Graphically by N.T.Rama Rao) appears in front of him to tell Krish that it is part of his life. But when Krish asks for a solution, Lord Krishna disappears, leaving Krish's fate to the audience.

Based on 0 rating
0 user 0 critic
Did you know? Junior NTR suffered an accident during shooting for a fight scene, and the shoot had to be stalled for several more days. Read More
0 User Reviews
No reviews available. Click here to add a review.
Cast

Chakravyuham had to be delayed as Kota Srinivasa Rao lost his son in an accident, and could not attend the shoot.

A huge set of a palatial bungalow was erected in Hyderabad for the movie, which is the biggest set for any Telugu film to date.

This movie was remade several times, most notably in Bengali as 'Khoka 420' with Dev, Nusrat Jahan and Subhashree Ganguly. And in Oriya as 'Love Master', in Kannada as 'Brindavana' with actor Darshan; and even internationally in Bangladesh, as 'Buk Fatey To Mukh Foteyna'.
Filming Start Date:
27 Nov 2009
Filming End Date:
15 Sep 2010 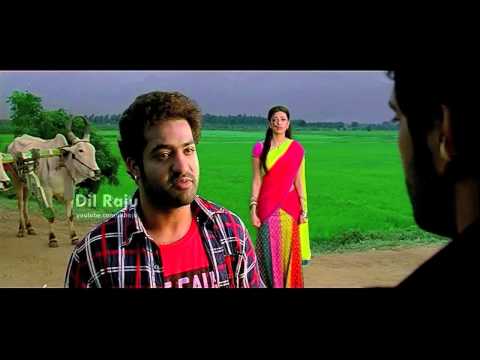 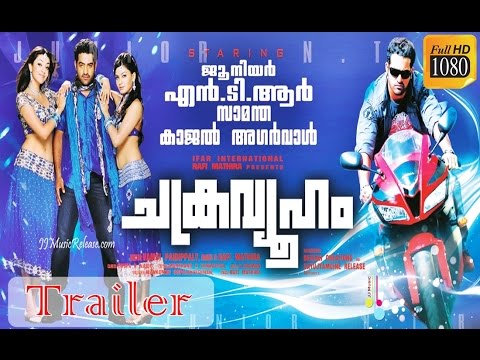 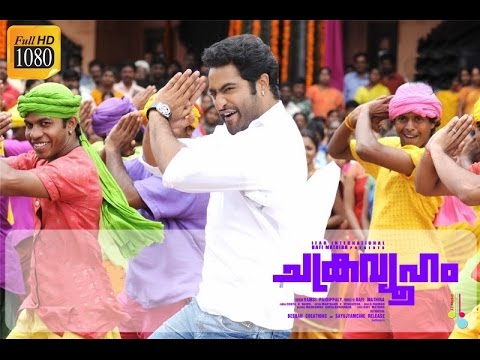 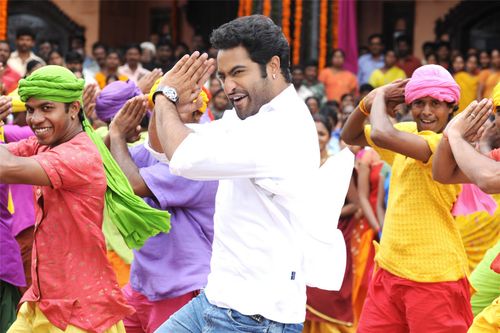 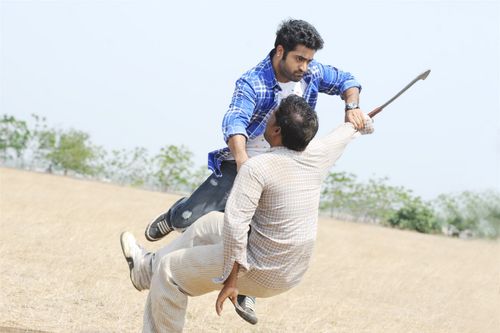 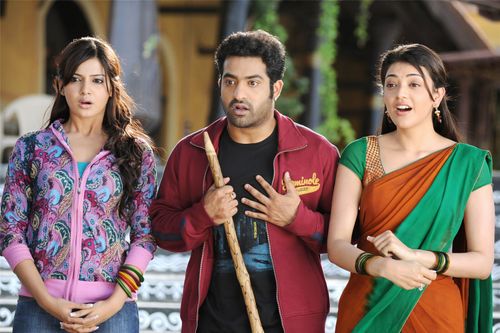 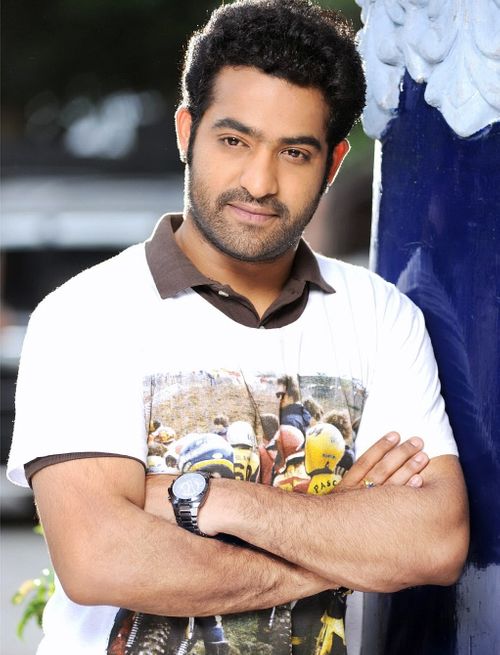