Cancel
Set against the backdrop of a conservative Victorian village, this fantasy stop-action-animated musical delves into the bizarre experiences in the life of Victor Van Dort, a shy young man. He enters into an arranged marriage with Victoria Everglot, who is from a socially well-reputed family in dire financial straits, as his own family seeks acceptance amidst high society. While both of them have trepidations about the marriage, they fall in love as soon as they meet each other. However, when things go wrong at the wedding rehearsal, Victor goes into the woods to practice his vows. At the culmination of his vows he places the wedding ring on what he thinks is a nearby upturned tree root. Shockingly, the root turns out to be the finger of a murdered woman in a tattered bridal gown, who rises from the grave claiming that she is now Victor's wife and takes him to The Land of the Dead. While Victoria waits on the other side, there's a rich newcomer that may take Victor's place. How will Victor escape his corpse bride and the land of the dead, to claim his rightful place as Victoria's groom?
See Storyline (May Contain Spoilers)

This offbeat stop-motion animated musical fantasy is set in an unspecified Victorian-era village somewhere in Europe, Victor Van Dort (Johnny Depp), the son of nouveau riche fish merchants, and Victoria Everglot (Emily Watson), the neglected daughter of hateful aristocrats, are preparing for their arranged marriage, which will raise the social class of Victor's parents and restore the wealth of Victoria's penniless family. Both have concerns about marrying someone they do not know, but upon meeting for the first time, they fall for each other.

After the shy Victor ruins the wedding rehearsal and is scolded by Pastor Galswells (Christopher Lee), he flees and practices his wedding vows in the nearby forest, placing the wedding ring on a nearby upturned tree root.
The root turns out to be the finger of a murdered woman in a tattered bridal gown, who rises from the grave claiming that she is now Victor's wife.

After fainting, Victor wakes up and finds out he was spirited away to the surprisingly festive Land of the Dead. The bewildered Victor learns the story of how Emily (Helena Bonham Carter), his new bride, was murdered years ago by an unknown criminal on the night of her secret elopement. Emily, as a wedding gift, reunites Victor with his long-dead dog, Scraps. Meanwhile, Victoria's parents hear that Victor has been seen in another woman's arms, and become suspicious.

Once back home, Victor asks Emily to wait in the forest while he rushes off to see Victoria and confess his wish to marry her as soon as possible, to which she gladly returns his feelings. Just as they are about to share a kiss, Emily soon arrives and sees the two of them together and, feeling betrayed and hurt, angrily drags Victor back to the Land of the Dead.

Victoria tells her parents that Victor has been forcibly wed to a dead woman, but they believe she has lost her mind and lock her up in her bedroom. She escapes her room by window and rushes to Galswells to find a way to help Victor, but fails. With Victor gone, Victoria's parents decide to marry her off to a presumably wealthy newcomer in town named Lord Barkis Bittern (Richard E. Grant), who appeared at the wedding rehearsal, against her will.

Emily is heartbroken by Victor's deception. Victor, however, apologizes for lying to her, and the two reconcile while playing the piano together. Shortly after, Victor's recently-deceased family coachman appears in the afterlife and informs Victor of Victoria's impending marriage to Barkis. In order for their marriage to become valid, Victor must repeat his vows in the Land of the Living and willingly drink the Wine of Ages, a poison - thus joining her in death.

Overhearing this, and fretting about having lost Victoria to another man, Victor agrees to die for Emily. All of the dead go "upstairs" to the Land of the Living to perform the wedding ceremony for Victor and Emily. Upon their arrival, the town erupts into a temporary panic until every living person recognizes each other's loved ones from the dead and they have a joyous reunion under the bizarre circumstances.

After a quarrel with Barkis (and realizing he was only after her supposed money), Victoria follows the procession of dead to the church. Emily notices Victoria and realizes that she is denying Victoria her chance at happiness the same way it was stolen from her.

As Victor prepares to drink the cup of poison to kill himself, Emily stops him and reunites him with Victoria. Barkis interrupts them, and Emily recognizes him as her former fiance - who is revealed to be the one who murdered her for her dowry. Barkis tries to kidnap Victoria at sword point, but Victor stops him and the two men duel. Emily intercedes to save Victor and Barkis mockingly proposes a toast to Emily, claiming she was "always the bridesmaid, never the bride."

He unknowingly drinks the cup of poison. The dead, now able to intercede, drag the "new arrival" back to the Land of the Dead for retribution for his crimes. Victoria, now a widow, is once again able to marry Victor.

Emily sets Victor free of his vow to marry her, giving the wedding ring back to Victor and her wedding bouquet to Victoria before exiting the church. As she steps into the moonlight, she transforms into hundreds of butterflies, presumably finding peace, as Victor and Victoria look on wrapped in each other's embrace.

Based on 0 rating
0 user 0 critic
Did you know? The maggot's voice, mannerisms and facial appearance are an impersonation of Peter Lorre. Read More
0 User Reviews
No reviews available. Click here to add a review.
Cast

Visual Effects Producer
Gilbert James
Technical Details
Film Type:
Feature
Language:
English
Colour Info:
Color
Sound Mix:
Dolby Digital EX, DTS, Sony Dynamic Digital Sound
Camera:
ARRIFLEX D-20/D-21, Canon Digital Rebel T2i
Frame Rate:
24 fps
Aspect Ratio:
2.35:1
Stereoscopy:
No
Fun Stuff
Taglines:
Loving You Is Like Loving The Dead
A Grave Proposal
The Graceful Dead
Throw Him A Bone
The love of his life.
The love of her afterlife.
Can a heart still break once it's stopped beating?
Rising to the occasion
There's been a grave misunderstanding.
Filming Locations:
London, England
Three Mills Studios, Three Mill Lane, Bow, London, England
England
Portland, Oregon
Goofs:
Continuity
During the dinner scene, as the camera pans up and down the table, we can see that everyone (including Mr. and Mrs. Everglot) have some sort of chicken-like bird on their plate. However, when the "guests" arrive, Mr. and Mrs. Everglott's chicken turns into soup.

Continuity
In the scene where Victor is in the woods saying his vows, he puts his ring on the "branch" aka the corpse bride's hand and he puts the ring on the pointer finger. But in the next shot when she says "You may kiss the bride." the ring has magically moved to her ring finger.

Continuity
During "According to Plan" when Maudelaine Everglot opens the safe, you see she is wearing a gold wedding ring. However, when she closes it, the ring is gone. It reappears later. The same thing happens to Nell Van Dort. In one shot she has her ring on but in the next it's gone.

Audio/Video Mismatch
During the Skeleton Dance, a trombone is being played. But the sound is of at least two muted trumpets.

Audio/Video Mismatch
When Victor and the Bride are playing their piano duet in the underworld, the notes the Bride's fingers had been playing continue to repeat as her hand breaks off and climbs up Victor's arm.

Audio/Video Mismatch
When Victor first plays the piano, the arpeggio he plays is actually a C fully diminished. The arpeggio that sounds is C Major.

Audio/Video Mismatch
In all the scenes with a piano, the keys that are played don't sound out the right melody. For example: Victor plays Middle C, but the sound that comes out is not Middle C, but D, sharps and flats are heard coming from white keys instead of black keys, etc.

Character Error
When Victor practices his vows in the woods, there is no priest present to legalize the vows. Furthermore, only the Corpse Bride says "I do", whereas Victor never does.
Trivia:
Albert Finney was the leading choice to play Grandpa Joe in Charlie and the Chocolate Factory (2005), but when Tim Burton was attached he nixed the idea because the only big name he wanted in the movie was Johnny Depp, so Burton cast Finney in this movie to apologize. Burton reportedly also offered a role to Sam Neill, who turned it down.

Mr. Bonejangles and his skeleton band are partly inspired by the cartoon The Skeleton Dance (1929) but are also heavily influenced by Cab Calloway and his band as they appeared in rotoscoped form in several Betty Boop cartoons. The piano player wears shades like Ray Charles, and his movements are based on Charles' mannerisms. The character BoneJangles is based on the famous dancer Bill Robinson who was called "Bojangles."

Johnny Depp and Christopher Lee also worked together in Tim Burton's Charlie and the Chocolate Factory (2005).

Tim Burton: [dead dog] Victor is reunited with his deceased (and now skeletal) dog Scraps. A picture of a younger Victor with a living Scraps is visible at the start of the film.

The puppets were made from stainless steel armatures covered with silicone skin.

When Victor plays the piano, he leans back and the nameplate says "Harryhausen", a reference to stop-motion animator Ray Harryhausen.

This is the first feature to be made with commercial digital still photography cameras (31 Canon EOS-1Ds MARK II SLR cameras with Nikon Lenses) instead of film cameras.

The puppets used neither of the industry standards of replaceable heads (like those used on The Nightmare Before Christmas (1993)) or replaceable mouths (like those used by Aardman Studios in The Curse of the Were-Rabbit (2005)) but instead used precision crafted clockwork heads, adjusted by hidden keys. This allowed for unprecedented subtlety, but was apparently even more painstaking than the already notoriously arduous animation. One animator even reported having recurring nightmares of adjusting his own facial expression in this fashion.

The maggot's voice, mannerisms and facial appearance are an impersonation of Peter Lorre.

The puppets were 25-28 cm tall and some of the stages were so large that animators could actually fit through the set doors with minimal crouching.

Danny Elfman originally wrote the part of BoneJangles looking for another musician to sing it, but after failing to find a voice that fit, Tim Burton asked Elfman if he would sing it himself. The result was so brutal on his vocal chords that Elfman was left hoarse whenever he had to voice the character.

The first original stop motion animated film Tim Burton has directed or produced since The Nightmare Before Christmas (1993).

Multiple, identical puppets had to be created so that more scenes could be accomplished in a shorter period of time. In all, fourteen puppets of the Bride and Victor were created, and thirteen were created of Victoria.

Had a 55-week shoot, during which 109,440 individually animated frames had to be set up and filmed. 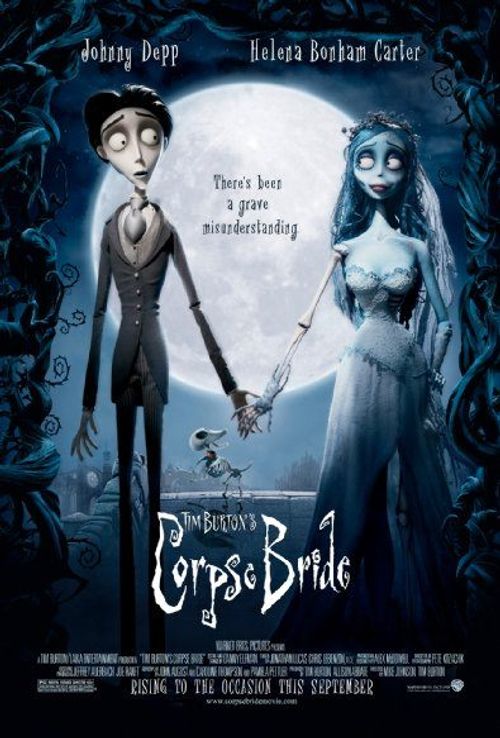