Cancel
Embedded with intense emotion and fierce action, this haunting social saga delves into the sensitive subject of bias against Tamil in Tamil Nadu, due to rampant westernisation and materialistic lifestyles in modern Tamil society. The stigma and double standards faced by those educated in Tamil-medium schools is explicitly highlighted through the tragic events in the life of Prabhakar (Jiiva), an orphan who is brought up by a Tamil teacher and subsequently becomes passionate about the Tamil language and goes on to become masters graduate in Tamil. This heart-wrenching tale plots Prabhakar's struggles throughout life, his tragic love affair with Anandhi (Anjali) and the terrible sequence of events that gradually causes him to deteriorate into a psychopathic serial killer, who later confesses to killing 22 people in cold blood. What horrific events could have turned a gentle and passionate young boy into a mass murderer?
See Storyline (May Contain Spoilers)

Powerful and poignant, this socially relevant drama revolves around Prabhakar (Jiiva), a Tamil teacher in a private school in west Mambalam area of Chennai, who leads a lonely life in a lodge. He is frustrated and even tries to commit suicide, in a system where knowing your mother tongue and teaching it is looked down upon by a society that is becoming increasingly westernised and materialistic.

The narration is mostly in a series of flashbacks. Prabhakar, for no fault of his, is at the receiving end, terrorized by cops and on the run after killing a railway booking clerk in a fit of rage. He roams all around the country and joins some saadhus, high on pot and also grows his hair long and keeps a shaggy beard.

Finally he wants to exorcise the devils within and at gun point kidnaps a television anchor Yuvaan-Suang (Karunas), who records his life story, where he confesses to killing 22 people in cold blood.

In the flashback he reveals his past, his upbringing by a Tamil teacher Poobaal (Azhagam Perumal) and his childhood sweet heart Anandhi (Anjali) who later in his life becomes an obsession for him. The love between Prabhakar and Anandhi is shown in flashes when Prabhakar is narrating his story to Yuvaan-Suang.

Prabhakar, the kid lives in a village. He develops a friendship with the neighboring girl, Anandhi. Anandhi's family relocates to another place after a few years after which Prabhakar's childhood is marred by tragic events as he loses his mother and grandparents in an accident. His father, a soldier, admits him in a boarding school and leaves. There he bonds with Poobal after some initial mischief.

Slowly, Prabhakar starts looking upon Poobal as his father. Years roll by and Prabhakar grows into a young man who develops an interest in Tamizh, his favourite teacher's subject.

After completing his 12th Grade, Prabhakar hears about the death of his beloved teacher Poobal, in an accident and travels to have one last look at him. There he sees Anandhi, his childhood sweetheart, whose father has also died in the same accident, in an argument with another family for having one look at her father's body.

Prabhakar enters into a fistfight and ensures that justice is done. This incident nurtures the love between Prabhakar and Anandhi. They meet regularly thence. Prabhakar joins college where his preference for taking up Tamil is ridiculed by his room mate and few others. Anandhi's mother does not object to her daughter's love for Prabhakar as she sees him as a source of financial support.

At one point, she sells his motorcycle for her expenses. Prabhakar does not mind it. After a few years, Anandhi and her mother are forced to relocate to Anandhi's uncle's house in north India due to monetary difficulties. Prabhakar initially loses contact with her but traces her back to her uncle's home.

Somehow, Anandhi finds Prabhakar and they share a poignant moment in her uncle's home where Prabhakar asks about her health to which Anandhi asks about the time of his departure. Prabhakar buys some clothes for her and leaves her promising that he will keep in touch. After few mail communications, Prabhakar again loses contact with her.

Meanwhile, Prabhakar gets a job as a Tamizh teacher and starts living in a lodge. He manages with a meager salary and loses focus in his personal life. On one night, he intimidates a call center employee who flees after failing to recite the Tamil verses which a drunken Prabhakar gives to him. It is after this incident that the encounter with a police inspector happens where they arrest Prabhakar for smoking in public.

Prabhakar is released and he tries to commit suicide, albeit unsuccessfully. The police again get hold of him and try to book him on false charges. Prabhakar manages to escape and then unintentionally kills the railway clerk.

Later, at one point in his life, Prabhakar comes in contact with Anandhi who has turned into a prostitute. He rescues her from the pimps after holding them at gun point. He plans to leave the city to his hometown along with Anandhi. He leaves her at a women's hostel after which the encounter with the television anchor happens.

The police get wind of Prabhakar and try to catch him in his hometown. Both Prabhakar and Anandhi hold hands and run towards an oncoming train committing suicide at the same place where Prabhakar's dog died during his childhood.

Based on 0 rating
0 user 0 critic
Did you know? Most of the shooting for this movie took place in Maharashtra, Andhra Pradesh, Kerala, and Chennai for nearly a year. Read More
0 User Reviews
No reviews available. Click here to add a review.
Cast

Visual Effects Producer
Bejoy Arputharaj
Technical Details
Film Type:
Feature
Language:
Telugu
Colour Info:
Color
Frame Rate:
24 fps
Aspect Ratio:
2.39:1 (Scope)
Stereoscopy:
No
Fun Stuff
Movie Connection(s):
Dubbed from: Kattradhu Thamizh (Tamil)
Trivia:
For this movie, Jeeva had grown a full-length beard for the character and cited the hardships during the shoots of the film, which he considered as his most painful experience and a 'torturous affair'. He even once revealed that he had to undergo therapy to 'come out of the character' as it was 'too emotional'.

The original title of this movie is 'Tamil M. A.' but it was eventually changed in the Tamil language.

Most of the shooting for this movie took place in Maharashtra, Andhra Pradesh, Kerala, and Chennai for nearly a year.

This made the directorial debut of critically acclaimed director Ram, an assistant director of maestro Balu Mahendra.

This movie marks the Tamil language debut of Anjali, whose performance in this movie as Anandhi was critically acclaimed and won her the Filmfare Award for Best Female Debutant. 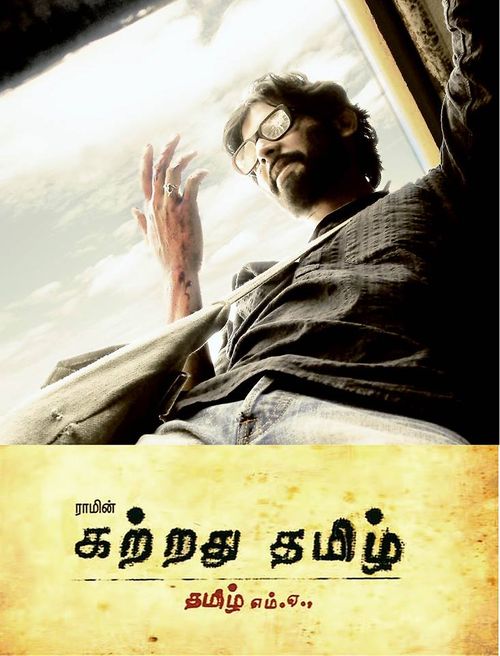