Cancel
U.S.-based Bio-technologist, Govind K. Somaiyya, narrates from a stadium a tale of religious conflict in India - even before the appearance of Jesus and Allah. This conflict was between worshipers of Bhagwan Shri Shiv and Bhagwan Shri Vishnu - with devotees of the latter being put to death. Now in post-9/11 era President George W. Bush invests heavily in biological research but things get out of control when a vial containing a deadly chemical is inadvertently dispatched via courier to Tamil Nadu, India. In order to retrieve it, Govind must face heavy odds, including a deadly CIA Agent, Chris Fletcher; a killer named Jasmine; RAW Officer Pranab Kundu, as well as a martial-arts artist from Tokyo.
See Storyline (May Contain Spoilers)

The plot of the film revolves around bringing together the lives of several individuals beginning with the 12th century and ending with the 21st century; the main person being a research scientist who develops a bio-weapon and makes sure that it is not acquired by a group of terrorists. Several other people also get involved in the process and all their stories connect after the striking of a tsunami, thus bringing in philosophical views into the picture.

Govindarajan Ramaswamy (Haasan), a bio-scientist speaks from the Jawaharlal Nehru Stadium about the Chaos theory and the Butterfly effect. He begins by reciting events from the 12th century in Chidambaram, when king Kulothunga Chola II (Napoleon), a Saivite, persecutes Vaishnavites and intends to destroy an idol of Govindaraja. Rangarajan Nambi (Haasan), a Vaishnavite, protects it and offends the king. The king orders Rangarajan to be executed by being submerged into the sea with the idol.

On 20 December 2004, a bio-technology lab in the USA designs a virus (combination of Marburg and Ebola) intended as a bio-weapon. After understanding its potential, Dr. Govind (Haasan), one of the scientists involved, refuses to give the vial (containing the virus) away due to fear of misuse. However, his boss, Dr. Sethu, has other plans and tries to sell it to a terrorist group when Govind flees with it. Christian Fletcher (Haasan), an ex-CIA, follows him and attempts to seize the vial, when it is air couriered to India by accident. Govind sneaks into the aircraft carrying the virus and changes its location. After arriving in India, he is questioned by Balram Naidu (Haasan) (Pranab Kundu in Hindi version), a RAW operative. Govind unsuccessfully tries to explain the series of incidents.

In the meantime, Fletcher, who has married Jasmine (Mallika Sherawat), and arrived in India, using her as a translator, threatens Govind and takes him away in a jeep with a police officer. After exiting the city, Govind escapes from Fletcher and reaches Chidambaram. Fletcher follows him, after getting a cab, along with Jasmine. After Govind attempts to persuade the receivers of the package carrying the virus, it finds itself inside an idol of Govindaraja. In the chaos, Jasmine is killed.

Govind and Andal (Asin), who is the granddaughter of Krishnaveni (Haasan), an old woman for whom the package was sent, try to run away from Fletcher, and arrive in a ground where illegal sand miners are working. They try to rape Andal, but in the ensuing fight, Govind defeats the sand miners and they sneak out after the interference of Vincent Boovaragan (Haasan), a radical Christian, and save the family of Khalifulla (Haasan) from a car-crash in the process. One of them, a lady, faints suddenly and is taken to a hospital, where Govind procures a cooling box to store the weapon, as it is unstable and its temperature needs to be maintained. He meets Avatar Singh (Haasan), a pop singer, who is also there for treatment of his throat cancer. His prescription drugs are in a similar-looking box and before leaving the hospital, he unknowingly switches it with Govind's box.

Fletcher follows them and takes Andal and the Muslim family hostage in their house, from where Govind is blackmailed to bring back the box he is carrying. Unable to do anything, he reaches the place, only to find out that Avatar Singh must have the weapon. The police surround the house, forcing Fletcher, Govind and Andal to flee in a jeep. Shinghen Narahsi (Haasan), a Japanese martial arts expert, whose sister had been killed by Fletcher, follows them. Avatar Singh finishes his last performance and discovers the blunder, only to get shot by Fletcher after having a row. Govind and Andal flee to reach a construction site, where Govind takes out the weapon before giving the idol to Fletcher.

The sun dawns on 26 December 2004. Govind gets an idea from some drainage workers to immerse the virus in a large quantity of salt to destroy it. He goes to the sea, only to be stopped by Fletcher. Shinghen Narahasi arrives and fights with Fletcher. Both Narahasi and a motivated Govind fight Fletcher together and defeat him. Fletcherh opens and swallows the virus. Suddenly, a tsunami strikes, washing away Fletcher, and causing great destruction along the coast. Poovaragan's house is struck and he dies in a car after saving a child. Andal, Govind and Narahasi get into a boat. Krishnaveni arrives and begins to cry after perceiving Poovaragan as her long-lost son.

After relief measures are taken, Andal argues that god had sent forth the tsunami to get rid of the weapon. Govind responds by asking if god would destroy hundreds of lives to save millions.Then the shot zooms back where it is shown that they were talking in front of the idol submerged in the twelfth century. The scene shifts to the stadium, where Avatar Singh, who had his cancerous growth taken away by the shot he received, along with several others, listening to the speech by Govind, followed by former president George Bush (Haasan) as the credits roll.

Based on 0 rating
0 user 0 critic
Did you know? Kamal Hassan make-up took six hours to apply to show him as the United States President. Read More
0 User Reviews
No reviews available. Click here to add a review.
Cast

Character Error
In the scene where Avatar Singh and Govindarajan are in the lift, Avatar Singh is seen to be leaving first while Govindarajan pretends to talk on his cellphone. If one looks closely, Govindarajan is holding his Nokia 3310 the wrong way - the screen is visible toward the camera. Possibly intended.
Trivia:
The film completed a 175-day run at the box office, which is about 20 million tickets were sold worldwide. Thus making the first Tamil film to beat the record set by 'Sivaji' a year earlier. However, this new record was beaten two years later by 'Enthiran', starring Rajinikanth in the lead.

Earlier Kamal Hassan was about to act with ten actresses alongside each of his ten characters in the film. Vidya Balan, Jyothika, Mumtaj, Kiran Rathod, Meena, Bhoomika Chawla, Sameera Reddy, Nadia Moidu, Kamalinee Mukherjee, Nithya Das, Meera Jasmine, Simran, Vasundhara Das, Trisha Krishnan, Nayanthara and Shriya Saran were all offered such roles in the film, but ultimately turned them down due to date clashes with other films. Eventually at the end, Asin and Mallika Sherawat were selected as the film's heroines.

The term "Dasavatharam" is used in Hindu mythology to depict the ten incarnations of Lord Vishnu, based on it Kamal Hassan plays ten characters in this film.

The first three minutes of the film nearly cost the producer three crores (30 million) rupees for those particular scenes.

AR Rahman and actress Shriya Saran were also planned to be a part of this film's cast and crew. However, the AVM Company passed a rule that nobody involved in the making of Rajnikanth's Sivaji should be involved in making this film, which forced the two of them out. Later they were respectively replaced with Himesh Reshammiya and Mallika Sherawat.

Mallika Sherawat made her debut in Tamil with this film.

Asin performed her first film in a double role.

The Tsunami scene's VFX were shot at a 50,000 square foot area of land in which a 100-ft. wall was created near Muttukadu for the film. Six machines, which are capable of generating 20-foot-high waves, were imported from the US, by a total cost of Rs. 3.5 crores.

Kamal Hassan make-up took six hours to apply to show him as the United States President.

Kamal Hassan was keen and particular that to break the record for an actor appearing in the most roles, so he came up with an original storyline incorporating Indian religion and mythology.

"Kaa...Karuppanukkum" song, with Kamal Hassan and Mallika Sherawat, was to be shot in the USA, but Sherawat had issues with her visa which meant she could not enter the States, so the song's destination was shifted to another destination: Malaysia.

The score for the song "Ulaga Nayagan" was copied from the song "Why Does It Happen in Love?" from Dil Maange More!!!, Hindi movie which also had music by Himesh Reshammiya.

On September 2006, assistant director Senthil Kumar filed a case at Madras High Court, claiming that he was created the film's story in a script titled "Ardhanari" ("Clones"), Kamal Hassan and producer Oscar V Ravichandran had stolen his script. On the basis of this complaint, the Chennai Police questioned the actor and later the High Court sent notices to Haasan and Ravichandran announcing an interim stay on the release of the film. In September 2007, the Court dismissed Kumar's petition, clearing the legal hurdle. 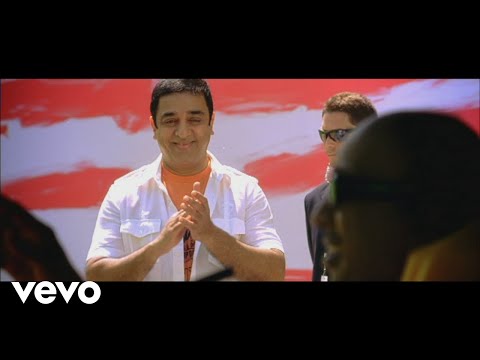 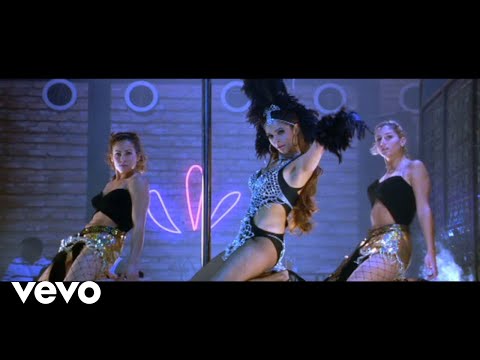