Cancel
A Russian army explorer who is rescued in Siberia by a rugged Asian hunter renews his friendship with the woodsman years later when he returns as the head of a larger expedition. The hunter finds that all of his nature lore is of no help when he accompanies the explorer back to civilization.

Based on 0 rating
0 user 0 critic
Did you know? Out of the hundred or so men and women on his entire film crew, only 6 of them were Japanese. Read More
0 User Reviews
No reviews available. Click here to add a review.
Cast

Revealing Mistakes
In the burial scene, the shadows of the actors make it clear that there is a fake backdrop.
Trivia:
This film was made when a member of the Russian embassy contacted Akira Kurosawa, asking him to make a Russian film for Russians, being that television hadn't grown yet in the USSR and that Russia lacked, according to the ambassador, good writers and directors for films.

The film is based on the autobiographical writings of Russian soldier Vladimir Arseniev during his surveying expeditions in Siberia in the early 1900's.

Out of the hundred or so men and women on his entire film crew, only 6 of them were Japanese.

Akira Kurosawa had hoped to make this film as early as in the 1950's, but he had trouble adapting the story to a Japanese setting, never thinking that one day he would actually be able to film it on location in Russia, and with Russian actors.

The original non-fiction writing that the film was based on was titled "Dersu okhotnik." The English version was later titled "In the Jungles of Ussuri."

Mosfilm wanted Akira Kurosawa's frequent collaborator Toshiro Mifune to play Dersu, but Matsue convinced them otherwise as Mifune would not be attached to such a long production.

According to Variety magazine, a Mosfilm spokesman stated that "artistic direction of the [film] will be left 100% to Kurosawa direction."

Akira Kurosawa: [weather] Same as in Kurosawa's other films, this one too continues the tradition of having various weather conditions (rain, snow, rainbow...) for aesthetic or symbolic value. 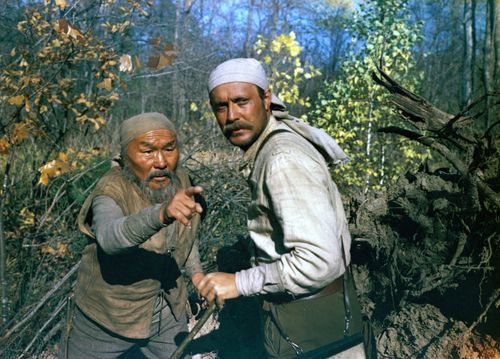