Cancel
A mysterious man who has multiple jobs as a garage mechanic, a Hollywood stuntman and a getaway driver seems to be trying to escape his shady past as he falls for his neighbor - whose husband is in prison and who's looking after her child alone. Meanwhile, his garage mechanic boss is trying to set up a race team using gangland money, which implicates our driver as he is to be used as the race team's main driver. Our hero gets more than he bargained for when he meets the man who is married to the woman he loves.
See Storyline (May Contain Spoilers)

The unnamed Driver (Ryan Gosling), who lives in an Echo Park, Los Angeles apartment, works repairing cars and as a part-time movie double. Managed in both jobs by auto shop owner Shannon (Bryan Cranston), the duo also provide a getaway driver service. With Shannon organizing the events, the Driver gives criminals only five minutes to perpetrate robberies and reach his car.

Meeting his new neighbor, Irene (Carey Mulligan), the Driver soon becomes close to her and befriends her young son, Benicio (Kaden Leos), while Irene's husband, Standard Gabriel (Oscar Isaac), is in prison. After her husband is freed, Irene still asks the Driver to visit them.

Shannon persuades Jewish mobsters Bernie Rose (Albert Brooks) and Nino (Ron Perlman) to purchase a stock car chassis and to build it for the Driver to race. Irene's husband, owing protection money from his time in prison, is beaten up by Albanian gangster Cook (James Biberi). Cook demands that Standard rob a pawnshop for $40,000 to pay the debt off. The Driver, concerned for the safety of Irene and Benicio, steals a Ford Mustang and offers to act as the getaway driver for the pawnshop job.

While waiting for Standard and Cook's accomplice Blanche (Christina Hendricks) to complete the heist, the Driver sees a custom Chrysler 300 pull into the parking lot. Blanche returns with a large bag, but Standard is shot in the back several times and killed by the pawnshop owner. The Driver flees with Blanche and the money. They are pursued by the Chrysler, which bumps them but skids in the fast turns and eventually spins out.

Eluding the other vehicle, the Driver hides with Blanche in a motel. Learning the bag contains a million dollars yet the TV news reports the robbery as no money stolen, the Driver threatens to beat Blanche, forcing her to admit she and Cook planned to re-steal the mysterious money with the Chrysler. Minutes later, two of Cook's men shoot them in the motel room, killing Blanche and injuring the Driver before he manages to kill them both.

At the auto shop, the Driver's arm is bandaged from the shotgun pellets, and Shannon offers him to hide the money, but he refuses. He finds Cook in a strip club, smashes his fingers with a hammer and threatens to kill him, so Cook reveals that Nino was behind the robbery. The Driver decides to return the million, but Nino dismisses the offer and instead sends a hitman (Jeff Wolfe) to the Driver's apartment building. Entering the elevator with Irene, the Driver encounters the hitman and spots his pistol. The Driver kisses Irene before violently beating the hitman to death. Irene exits stunned.

In his pizzeria, Nino reveals to Bernie that the money was a stash for dangerous mobsters in New York, and since anyone tied to the robbery could lead the Mafia to them, they need to kill everyone involved. Bernie proceeds to murder Cook with cutlery from the restaurant. At the auto shop, he kills Shannon when he refuses to divulge the whereabouts of the Driver.

The Driver, disguising himself with a rubber mask from his stuntman job, follows Nino from the pizzeria to the Pacific Coast Highway and T-bones Nino's car onto a beach, then chases him from the wreck to the ocean and drowns him. The Driver goes to meet Bernie at a Chinese restaurant. He makes a phone call to Irene to tell her he is leaving, saying that meeting her and Benicio was the best thing that ever happened to him.

At the restaurant, Bernie promises that Irene will be safe in exchange for the million, but warns the Driver must always be on the run. At his car, the Driver gives Bernie the money, but Bernie attempts to kill him, stabbing him in the stomach in broad daylight. The Driver, however, survives and retaliates by fatally stabbing Bernie in the neck, then drives away, leaving the money bag at Bernie's dead body. Irene knocks at the Driver's apartment, but he is not there anymore. He is shown still driving away at night, for the last time.

Tagline: Some Heroes Are Real

Continuity
The Impala shifts up thorough eight gears in the chase .

Crew/Equipment Visible
The camera reflection is seen on a dolly move where the Driver sees Irene with Benicio outside the Grocery Store and gives them a ride home.

Factual Mistake
When Driver steals the Mustang off the street he gains access without using a key. He would have needed a properly cut and coded transponder key to start the car.
Trivia:
Ryan Gosling had replaced Hugh Jackman.

In preparation for his role, Ryan Gosling restored the 1973 Chevy Malibu that his character uses in the film.

During filming, Carey Mulligan got pulled over by a cop when driving Nicolas Winding Refn home over the speed limit. Her excuse was having too many cans of Red Bull. 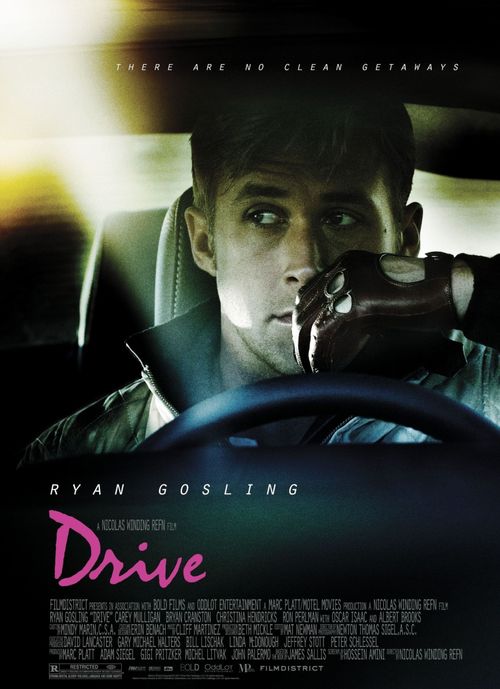