Adam Bell, a solitary college history professor who looks identical to the man at the sex show, rents a movie, Where There's a Will There's a Way, on the recommendation of a colleague. Adam sees an actor in a small role who looks exactly like him.

After doing some research online, Adam identifies the actor as Daniel St. Claire, the stage name for one Anthony Claire. Adam rents the other two films in which Anthony has appeared and develops an interest in the man, who appears to be his physical doppelgänger. Adam's girlfriend Mary becomes troubled by the change in his behavior. Adam stalks Anthony, visiting his office and calling him at home. Everyone, including Anthony's pregnant wife Helen, confuses the two. In a separate dream-like image, a giant spider lurks among and above the skyscrapers of Toronto.

Adam and Anthony eventually meet in a hotel room and discover they are perfectly identical copies of each other, including a scar each man has on his left abdomen above the pancreas. Adam is reserved and bookish while Anthony is hot-headed and sexual. After following Mary to work, Anthony confronts Adam, accuses him of having sex with his wife Helen, and demands Adam's clothes and the keys to his car in order to stage a sexual liaison with Mary, promising to disappear from his life forever afterwards. Adam complies, and Anthony takes Mary to the hotel where the two men met. Meanwhile, Adam breaks into Anthony's apartment and gets into bed with Helen, who seems to realize her partner is different and asks Adam to stay.

At the hotel, Mary panics when she sees the mark where Anthony's wedding ring usually sits and demands to know who he is, as her boyfriend doesn't wear a ring. She forces Anthony to drive her home, but the two get into a fight, and the car is involved in a high-speed crash, presumably killing them both.

The next day Adam dresses in Anthony's clothes and finds a key inside the jacket pocket: the same key that was used to get into the private club in the beginning of the movie. Adam is ready to begin life as Anthony. Helen gets out of the shower and enters the bedroom. Adam asks Helen if she is doing anything tonight and follows the question by telling her he will be busy tonight. As he turns the corner, he beholds a tarantula spider big enough to fill the room. It seems strangely frightened of him and cowers against the rear wall. Possibly even more incongruous, however, is Adam's inexplicably muted reaction to this monstrosity; as he stares, his expression is far more resigned than surprised.

Tagline: You can't escape Yourself!

'Enemy' has much more to offer than what meets the eye
Ben MK, The Man Cave Cinema
0

'Enemy' offers two Jake Gyllenhaals for the price of one, neither interesting
AA Dowd, AV Club
0

Steer clear of the art house where this film is playing
Peter Hartlaub, SFGate
0 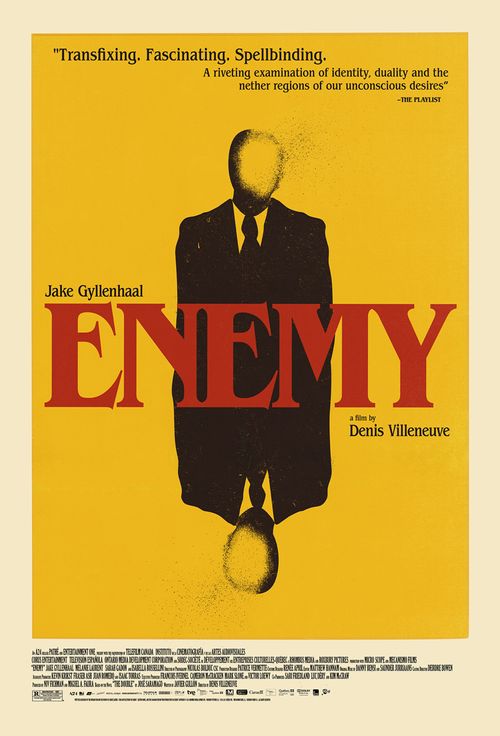 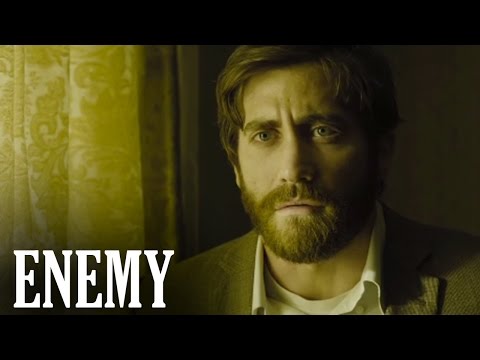