Cancel
Embedded with quirky comedy and fast-paced action, this animation adventure revolves around Victor Frankenstein, a bright but outcast student without any friend but his dog Sparky. When the new science teacher Mr. Rzykruski challenges the students to participate in the science fair, Victor's father forces him to play baseball otherwise he would not sign the necessary authorization for his son. During the game, Sparky chases the ball and is hit by a car. Victor recalls Mr. Rzykruski's class about the effects of electricity and successfully resuscitates Sparky using lightning. Victor hides Sparky in the attic but the weird Edgar sees the dog on the garden and blackmails Victor to learn how to bring the dead to life. Edgar does not keep the secret and soon Victor's envious schoolmates revive several creatures to win the science fair contest. When the town is invaded by the monsters, Victor and Sparky are the last chance to rescue the girl Elsa van Helsing from the claws of Mr. Whiskers.
See Storyline (May Contain Spoilers)

Set against the backdrop of New Holland, this animation adventure delves into the trials and triumphs in the life of young filmmaker and scientist Victor Frankenstein (Charlie Tahan), who lives with his parents, Ben and Susan Frankenstein (Martin Short and Catherine O'Hara) and dog Sparky in the quiet town of New Holland. Victor's intelligence is recognized by his classmates at school, his somber next-door neighbor, Elsa Van Helsing (Winona Ryder), mischievous, igor-like Edgar "E" Gore (Atticus Shaffer), obese and gullible Bob (Robert Capron), overconfident Toshiaki (James Hiroyuki Liao), creepy Nassor (also Short), and an eccentric girl nicknamed Weird Girl (also O'Hara), but communicates little with them due to his relationship with his dog. Concerned with his son's isolation, Victor's father encourages him to take up baseball and make achievements outside of science. Victor hits a home run at his first game, but Sparky, pursuing the ball, is killed by a car.

Inspired by his science teacher Mr. Rzykruski's (Martin Landau) demonstration of the effect of electricity on dead frogs, a depressed Victor digs up Sparky's corpse, brings him to his makeshift laboratory in the attic, and successfully reanimates him with lightning. Seeing Weird Girl's living cat, Mr. Whiskers, the undead Sparky escapes from the attic and explores the neighborhood. He is recognized by Edgar, who blackmails Victor into teaching him how to raise the dead. The two reanimate a dead goldfish, which turns invisible due to an error with the experiment. Edgar brags about the undead fish to Toshiaki and Bob, which, in panic of losing the upcoming science fair, inspires them to make a rocket out of soda bottles, which causes Bob to injure his arm and Mr. Rzykruski to be blamed and fired due to his accused influencing and reviling the townsfolk for questioning his methods when he steps up for self-defense.

Eventually, Edgar's fish demolishes when he tries to show it to a skeptical Nassor (who was told by Toshiaki) and when Edgar is confronted by Toshiaki, Nassor, and Bob on the baseball field at school, he reveals Victor's actions, inspiring them to try reanimation themselves. Victor's parents discover Sparky in the attic and are frightened, causing the dog to flee.

Victor and his parents search for Sparky while the classmates invade the lab, discovering Victor's reanimation formula. The classmates separately perform their experiments, which go awry and turn the dead animals into monstersMr. Whiskers holds a dead bat while it is electrocuted, turning him into a vampire cat; Edgar turns a dead rat he found in the garbage into a wererat; Nassor revives his mummified hamster Colossus; Toshiaki's turtle Shelley is covered in a growth formula and turns into a giant Gamera-like monster; and Bob's Sea-Monkeys grow into amphibious humanoid monsters. The monsters break loose into the town fair where they wreak havoc.

After finding Sparky at the town's pet cemetery, Victor sees the monsters attacking the fair and goes to help his classmates deal with them; the Sea-Monkeys explode after eating salt-covered popcorn, and Colossus is stepped on by Shelley, while the rat and Shelley are returned to their original, deceased forms after being electrocuted. During the chaos, the town's mayor's niece Elsa van Helsing is grabbed by Mr. Whiskers and carried to the town windmill.

The townsfolks blame Sparky for her disappearance and chase him to the windmill, which Mayor Bergermeister (also Short) accidentally ignites with his torch. Victor and Sparky enter the burning windmill and rescue Elsa, but Victor is trapped inside. Sparky rescues Victor, only to be dragged back inside by Mr. Whiskers. A final confrontation ensues, and just as Mr. Whiskers has Sparky cornered, a flaming piece of wood breaks off and impales him. The windmill collapses on Sparky, killing him again.

To reward him for his bravery, the townsfolk gather to revive Sparky with their car batteries, reanimating him once more. Persephone, Elsa's pet poodle, who has a hair style similar to the Elsa Lanchester's Bride of Frankenstein, comes to Sparky as the two dogs share their love.

Tagline: The electrifying dog is back from beyond the grave

Based on 0 rating
0 user 0 critic
Did you know? This film had won the Saturn Award for Best Animated Film and was nominated for an Academy Award; a Golden Globe; a BAFTA; and an Annie Award for Best Film in each respective animated category. Read More
0 User Reviews
No reviews available. Click here to add a review.
Cast

Continuity
On the chalkboard the word "Life" above the drawing of Sparky disappears in a following scene.

Continuity
Victor raises Sparky onto the roof with a swing set he attached to the attic skylight and when he let the kites go on his roof in the same scene, the swing set is gone.
Trivia:
This is the first black-and-white feature film and the first stop-motion film to be released in IMAX 3D,

This film had won the Saturn Award for Best Animated Film and was nominated for an Academy Award; a Golden Globe; a BAFTA; and an Annie Award for Best Film in each respective animated category.

This animation adventure is in black and white. It is also the fourth stop-motion film produced by Burton and the first of those four that is not a musical.

This movie is a remake of Burton's 1984 short film of the same name and is a parody of and a homage to the classic 1931 horror film Frankenstein.

This film contains many references and influences from horror cinema of many different sub-genres across motion picture history, from the 1920s to the 1980s.

The demonstration that Mr. Rzykruski shows in class of the frog's legs twitching when given electricity is based on actual experiments in 1771 done by Italian physicist Luigi Galvani.

Mr. Rzykruski looks a lot like Vincent Price, an actor by whose films Tim Burton was influenced.

This movie is Winona Ryder and Tim Burton's 3rd collaboration with the previous one being Edward Scissorhands which was 21 years earlier and reunites the duo with Catherine O'Hara, who had previously worked on Beetlejuice.

One of Tim Burton's regular actors, Christopher Lee, did not take part in this film, but had an archive footage of him in Horror of Dracula that is watched by Victor's parents on television. 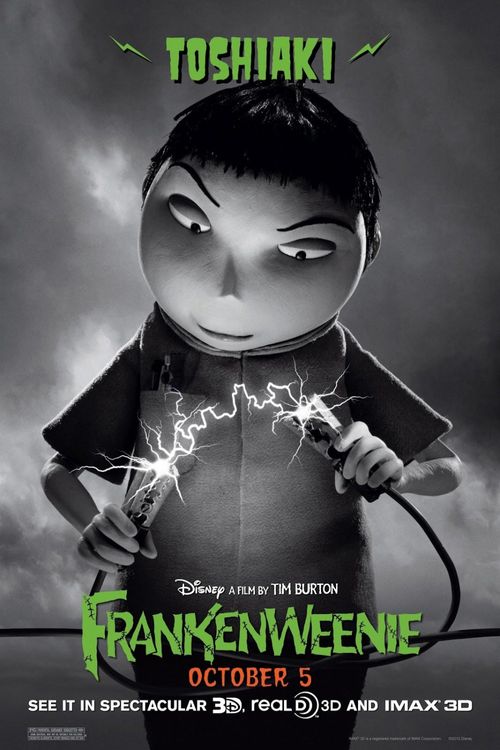 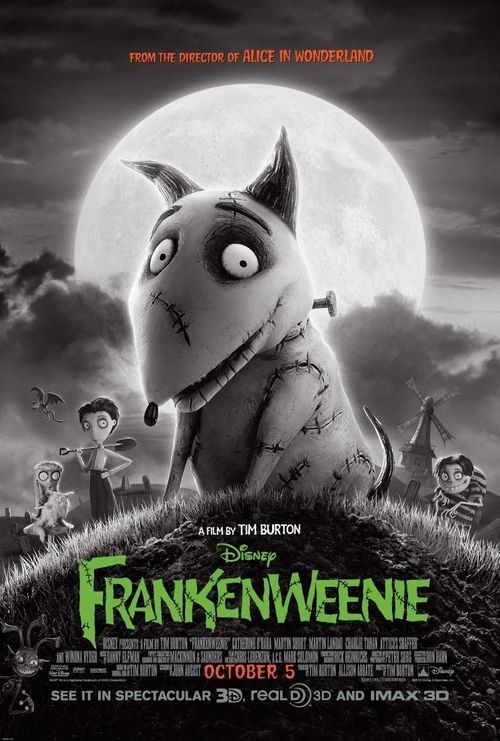 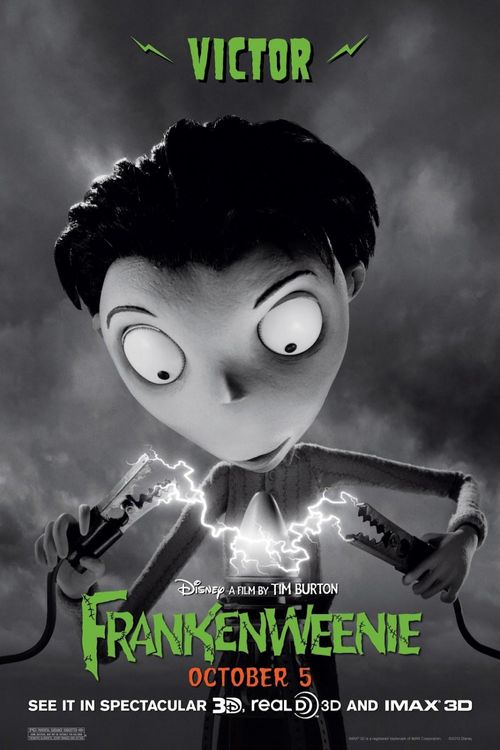 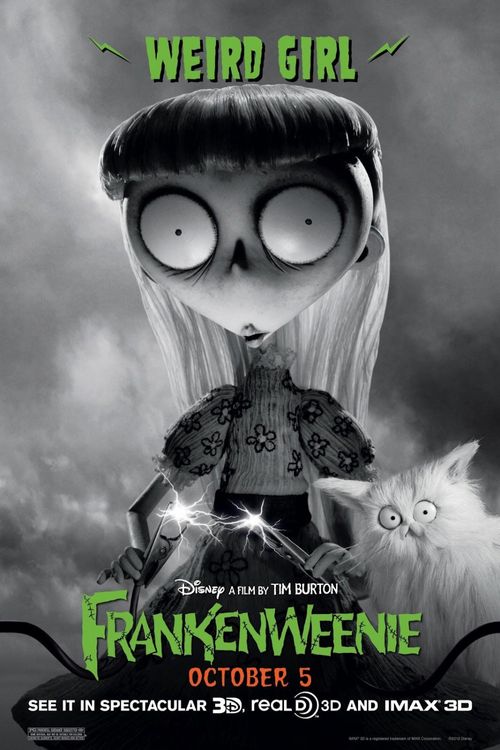