Cancel
Fast-paced and fiery, this action-oriented crime thriller follows the fluctuating fortunes in the life of Ram, a restaurant owner who leads a quiet life with his wife and adopted son in Bangkok. On one fateful occasion, a group of psychopathic criminals enter into his restaurant and attempt to molest a female employee. Ram jumps to her rescue and shoots the criminals, becoming a hero in the media. However, his valiant act turns into a curse as it exposes his violent past. With his old enemies returning to exact revenge upon him, will he succeed in keeping his family together and safe?
See Storyline (May Contain Spoilers)

This action-oriented saga revolves around Ram (Jagapathi Babu), who is a restaurant owner in Bangkok. Ram leads his life happily with his wife Vidya (Vimala Raman) and adopted son Chaitanya.

On one occasion, when psychopathic killers enter Ram's restaurant and attempt to molest a female employee, Ram's first instinct is to protect her and he ends up shooting the criminals. As a consequence, he is celebrated by the media as a hero and his face is pasted on many news channels and newspapers.

Gurunarayana (Kota Srinivasa Rao) is shocked to see Ram, who shares a remarkable resemblance to Durga (Jagapathi Babu), an arch-rival, who was declared dead long ago. Gurunarayana's son Shankar Narayana (Kota Prasad) travel to Bangkok along with their lawyer Saab (Tanikella Bharani) to find out whether he is Ram or Durga.

Vidya is traumatised and terrified by the knowledge that Ram used to be a criminal and separates from him. However, a Bangkok police officer of Indian origin, convinces her that Ram has buried his previous life and really become a peaceful and law-abiding citizen. Vidya forgives Ram after he confesses everything about his past life but will his enemies allow him to lead a peaceful life with his family?

Tagline: History is back

Based on 0 rating
0 user 0 critic
Did you know? This movie is the sequel to the super hit Telugu film Gaayam (1993). There was a great deal of anticipation for the release of this movie, but it did not rise up to expectations at the box office. Read More
0 User Reviews
No reviews available. Click here to add a review.
Cast

Editor
Praveen Pudi
Technical Details
Film Type:
Feature
Language:
Telugu
Colour Info:
Color
Frame Rate:
24 fps
Aspect Ratio:
2.35:1, 2.39:1 (Scope)
Stereoscopy:
No
Fun Stuff
Taglines:
History is back
Movie Connection(s):
Dubbed into: Ivan Chathriyan (Tamil)
Filming Locations:
Bangkok
Hyderabad, Andhra Pradesh
Trivia:
This movie is the sequel to the super hit Telugu film Gaayam (1993). There was a great deal of anticipation for the release of this movie, but it did not rise up to expectations at the box office. 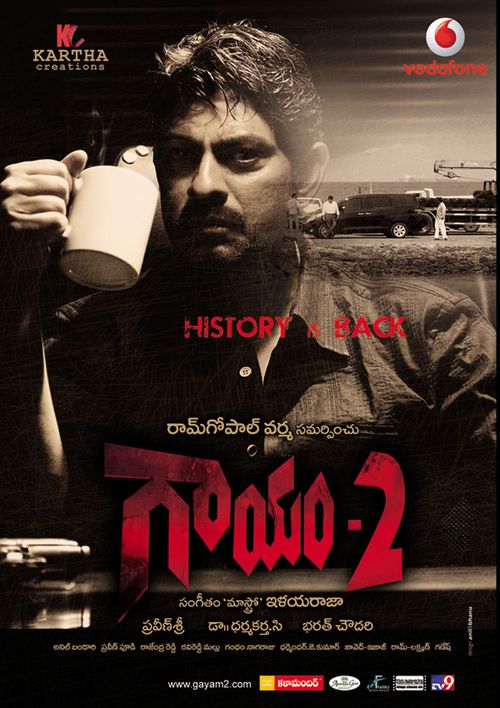