Cancel
The sci-fi television series Galaxy Quest, which took place aboard the intergalactic spaceship NSEA Protector, starred Jason Nesmith as suave Commander Peter Quincy Taggert, Gwen DeMarco as sexy communications person Lt. Tawny Madison (a role which consisted solely of repeating what the computer stated, much to Gwen's annoyance), Shakespearean trained Sir Alexander Dane as alien Dr. Lazarus, Fred Kwan as engineer Tech Sgt. Chen, and Tommy Webber as child gunner Laredo. Seventeen years after the show last aired, it lives on in the hearts of its rabid fans. However it lives on in infamy for its stars, who have not been able to find meaningful acting work since. Their current lives revolve around cashing in on however those roles will afford, which usually entails attending fan conventions or worse, such as shopping mall openings. Only Jason seems to relish his lot in life, until he finds out that his co-stars detest him because of his superior attitude as "the Commander", and much of the public considers him a laughing stock. Their lives change when Jason is approached by who he thinks are convention fans asking for help. They are in reality an alien race called Thermians, led by Mathesar, who have modeled their existence after the show, which they believe to be real. When Jason and then the rest of his co-stars (along with Guy Fleegman, who was killed off before the opening credits in only one episode) go along with the Thermians, Jason's co-stars who believe they are off to yet another paying gig, they learn that they have to portray their Galaxy Quest roles for real. With no scriptwriters to get them to a happy and heroic ending, they have to trust that their play acting will work, especially in dealing with the Thermian's nemesis, General Sarris. Guy in particular fears that he will go the way his character did on the show. But when they run across technical issues that they as actors didn't care anything about during the filming of the show and thus now don't know how to deal with, they need to find someone who should know what to do.
See Storyline (May Contain Spoilers)

The film centers on the cast of a once-popular television space-drama series called Galaxy Quest. The fictional series starred Jason Nesmith (Allen) as the commander of a spaceship called the NSEA Protector, Alexander Dane (Rickman) as the ship's alien science officer, Fred Kwan (Shalhoub) as the chief engineer, Gwen DeMarco (Weaver) as the computer officer, and Tommy Webber (Mitchell) as a precocious child pilot. Guy Fleegman (Rockwell) played an unnamed security officer who was quickly killed off in his only appearance on the show.

Eighteen years after the show was cancelled, as a Galaxy Quest convention full of dedicated fans is underway, Jason is approached by a group of people whose leader, Mathesar, says that they are aliens called "Thermians". Jason goes with them to what he assumes will be an amateur filming session, but the Thermians really are aliens, octopoidal creatures using a device that makes them appear human. Technologically advanced but having no concept of fiction, they have mistaken broadcasts of Galaxy Quest for historical documentaries and modelled their society on the ethos presented in the episodes. They have invented and built real fully functional versions of the technologies portrayed in the show, including the Protector.

The Thermians transport Jason onto the Protector to negotiate with Sarris, a reptilian humanoid warlord waging a genocidal war against the Thermian people. Sarris demands the Omega 13, a device used at the very end of Galaxy Quest's final episode. Still believing the situation is fictional, Jason casually orders the Thermians to fire upon Sarris's spaceship and then insists on returning home, but when they teleport him through space to Earth, he finally realizes the events were real. The Thermians then come back to Earth and ask for more help negotiating a surrender with Sarris. Jason, believing Sarris is the one surrendering, asks his co-stars to join him, and they agree, believing that the mission is just an acting job. Once the actors are aboard the Protector, they finally realize the truth, but Sarris prevents them from leaving, so they assume their television roles in order to save the Thermians.

However, they are not competent at controlling a real ship, and their encounter with Sarris goes poorly. They escape by flying through a minefield, which damages the beryllium sphere that powers the ship's reactor. The actors acquire a new sphere from a nearby planet after battling various alien creatures, but when they return to the ship, Sarris has boarded it and taken control. Sarris interrogates Jason about the Omega 13 and forces him to admit the truth about Galaxy Quest to Mathesar, who is heartbroken, equating acting with deception and lies. Sarris's men activate the ship's self-destruct sequence, but Jason and Alexander use a gambit from one of the show's episodes to kill the aliens guarding them.

Not knowing how the ship works, Jason contacts an avid Galaxy Quest fan named Brandon in his suburban home on Earth, using one of the Thermians' Vox communicators that he accidentally swapped at a promotional store opening. Brandon and his friends use their extensive knowledge of the ship to help Jason and Gwen abort the self-destruct sequence. When Jason asks Brandon what the Omega 13 does, Brandon says that while some people believe it was a bomb capable of destroying all matter in the universe in 13 seconds, he and others believe it is a time machine that sends its user 13 seconds into the past ("enough time to redeem a single mistake," as Jason observes).

With Jason in command of the Protector, the actors and Thermians destroy Sarris' ship and set course back to Earth. Sarris sneaks aboard the Protector and starts killing the crew, but Jason activates the Omega 13, is sent back in time 13 seconds, and thwarts his attack. As the Thermians take control of the ship, the actors detach the command deck and land on Earth with Brandon's help, accidentally crashing into the building where the Galaxy Quest convention is taking place. They emerge from the wreck to enthusiastic applause from the audience, who assume the crash is part of the entertainment, and when Sarris attacks again, Jason disintegrates him with a blaster pistol and receives even greater applause. Later that year Galaxy Quest is revived, starring the original cast, along with Laliari, a female Thermian who chose to stay on Earth as Fred's lover, and with Guy playing a new role as the ship's chief of security.

Tagline: The show has been cancelled... But the adventure is just beginning.

Based on 0 rating
0 user 0 critic
Did you know? The scene when Tim Allen is in a mens room overhearing how the cast of Galaxy Quest are nobodies and all the co-stars can't stand him mirrors an actual event in William Shatner's life. He discovered the exact same things about himself when he attended a Star Trek (1966) convention. Read More
0 User Reviews
No reviews available. Click here to add a review.
Cast

Audio/Video Mismatch
When Madison and Taggart are standing at the start of the chompers, the audio track has Madison saying "Screw this!" However, she is clearly saying "Fuck this!" but was dubbed for the PG rating from MPAA.

Audio/Video Mismatch
At the beginning of the movie, after Jason Nesmith enters the dressing room of the convention center, the audio track has Tommy Weber (Laredo) saying, "You are so full of it, man!" However, looking at the visual, he is clearly using another expletive instead of "it".

Character Error
On the way down to the planet to get the beryllium sphere Guy says no one knows his last name. On the planet when hatching their plan, Jason calls him "Fleegman" and tells him to set up a perimeter.

Character Error
In the credits for "Galaxy Quest: The Journey Continues," the credits read "Jason Nesmith as Commander Peter Quincy Taggert", though it should be "Taggart."

Continuity
When Nesmith and DeMarco are in the engineering room aborting the self-destruct sequence, DeMarco's uniform goes from being zipped up before they press the blue button, to being unzipped immediately afterward.

Continuity
When Alexander is being introduced, he bows with his hand flat against his chest. When he comes up, his hand is in a fist.

Continuity
When Tech Sergeant Chen is helping to roll the beryllium sphere on the planet, he is shown holding a large brown paper bag with his teeth. A split second later, the bag is gone.

Factual Mistake
On the original 2000/2001 DVD cast and crew listing, Justin Long is mistakenly billed as Brandon Long (Brandon being his character). On the 2003 DVD, this is corrected.
Trivia:
The scene when Tim Allen is in a mens room overhearing how the cast of Galaxy Quest are nobodies and all the co-stars can't stand him mirrors an actual event in William Shatner's life. He discovered the exact same things about himself when he attended a Star Trek (1966) convention.

Alan Rickman never takes off his headpiece throughout the entire movie.

The NSEA Protector's serial number is NTE 3120. NTE is short for Not The Enterprise.

The set of the NSEA Protector was built on an articulated platform so that it could move a few feet in any direction, for a touch of realism. When it was first used the set dropped two feet and shifted to the side, causing several cast members to fall out of their chairs and two lights to fall down.

According to writer David Howard, the continuous melodic yet monotone voice of Thermian Commander Mathesar was an original idea that Enrico Colantoni brought to the character. Everyone on the set loved it so much they kept it in the shoot.

The rock monster is a mock tribute to William Shatner, who desperately wanted to put rock monsters in the climax of Star Trek V: The Final Frontier (1989), but had to cut them out of his script for budgetary reasons.

Director Dean Parisot and star Tim Allen have revealed in interviews that the original tone of the film was much darker, with more scenes of violence. After test screenings the film was re-cut to emphasize the comedy and obtain a PG rating.

In theaters, the film was presented at 1.85:1 for the first 20 minutes. When Tim Allen first realizes he's on a real spaceship and the vista of Thermia is revealed, the screen image widened to 2.35:1 as the parting walls of the spaceship revealed the vista.

The design of the NTE ship is based on a Star Trek comm-badge.

Sam Rockwell based his portrayal on Bill Paxton's performance in Aliens (1986). In particular,

The NSEA Protector's automatic doors were given the "Tweeep-Clunk" sound effect as the doors in the original version of the video game Ultimate Doom (1993).

Laliari is the first main role Missi Pyle landed in a feature film. Her part was expanded after the producers noticed Sigourney Weaver was the only female main character.

The Thermians use appearance generators to assume human form, while their true form is that of massive alien beings with several tentacles. This concept was possibly taken from the Star Trek (1966) episode Star Trek: By Any Other Name (1968). 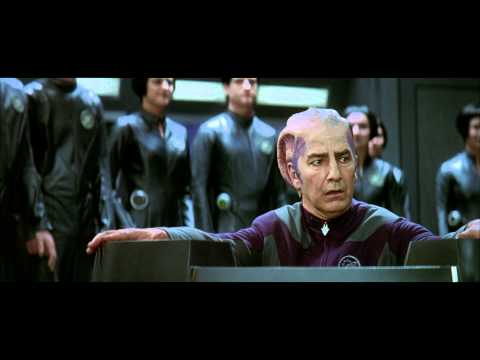 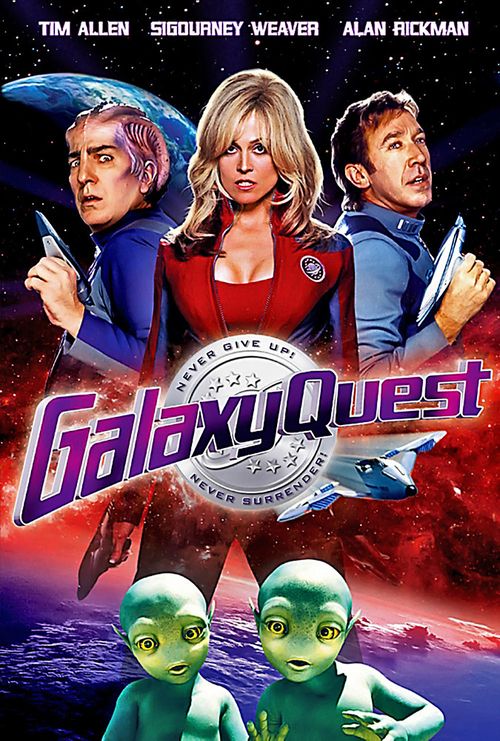 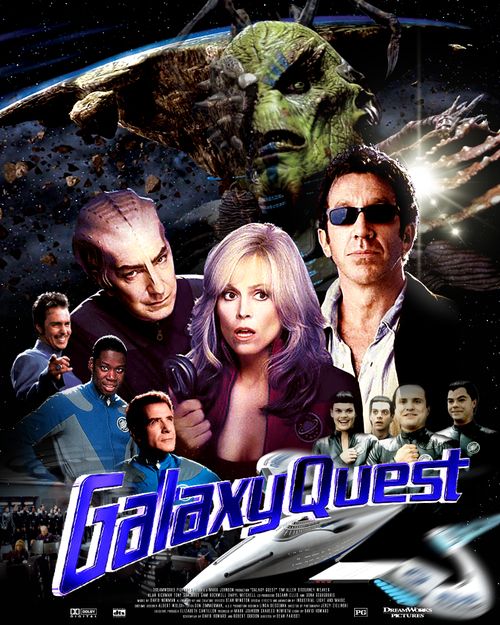 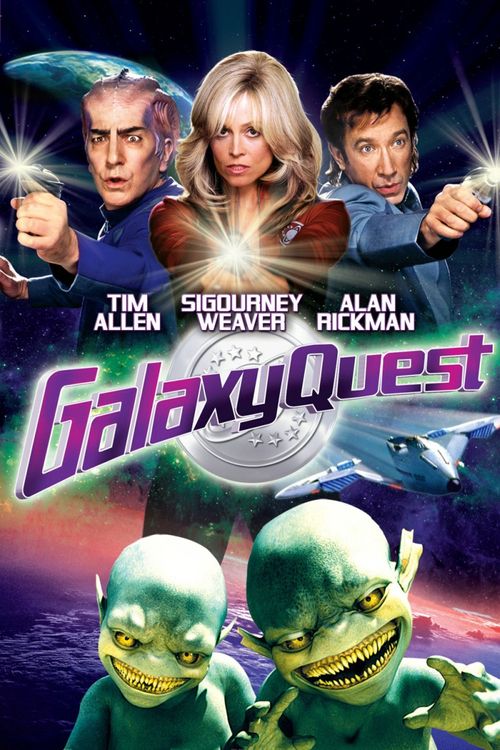