Cancel
Gemini (Vikram) is a hoodlum, who lives off extortions and petty crime. A brief love affair with the new girl on the block (Kiran), leads him on a path to reform, which ultimately pits him against the local goon Teja (Kalabhavan Mani).
See Storyline (May Contain Spoilers)

Teja (Kalabhavan Mani), an influential gangster, arrives at a magistrates' court with his gang to attend a hearing. They fight with another gang, resulting in the death of 'Chintai' Jeeva. Jeeva was a member of the rival gang, which is headed by Gemini (Vikram), an up-and-coming goon from Chintadripet who aspires to become a big don. To avenge Jeeva's death, Gemini and his gang hunt down the murderer, Pandian. Isaac, one of Gemini's men, kills Pandian, beginning a feud between Gemini and Teja. Pandian's mother Annamma (Manorama) becomes the gang's cook, posing as an old woman who must work to pay for an eye operation, and plots to poison them.

Gemini meets and falls in love with Manisha Natwarlal (Kiran Rathod), a Marwari woman. To pursue her, he joins an evening class at the college that she attends and she falls in love with him. Two businessmen approach Gemini to evict traders from a market so that a shopping complex can be built in its place. Because the market is in his control, Gemini refuses the offer and the businessmen approach Teja to carry out the job. Feigning an altercation with Gemini, his sidekick Kai (Thennavan) joins Teja's gang, acts as the inside man and foils the plan. Teja is enraged at being outsmarted by Gemini.

Singaperumal (Murali), an astute police officer, is promoted to the position of Director General of Police (DGP). Keen on eradicating crime, he arrests Gemini and Teja. The arrests are made "off the record" because both Teja and Gemini have political influence. Understanding their rivalry, Singaperumal puts them in a private cell so they can beat each other to death. When Teja tries to exact revenge for the market issue, Gemini does not fight back but persuades Teja to trick Singaperumal by pleading guilty and requesting a chance to reform. Gemini's trick works and they are released.

Because Gemini was arrested at the college, Manisha discovers his real identity and starts ignoring him. To regain her attention, Gemini reforms his ways. Now that Gemini and his gang regret their actions, Annamma reveals her true identity and forgives them. Teja returns to his gang and continues his illegal activities. He pesters Gemini to help him in his business. Gemini informs Singaperumal of Teja's activities; Teja is caught smuggling narcotics, is prosecuted and serves a term in prison.

A few months later, Singaperumal is transferred to the transport department and a corrupt officer (Vinu Chakravarthy) takes his place. Vinu releases Teja and together they urge Gemini to help them in their business. Gemini refuses; to force him to return to his old ways, Teja persuades Isaac to conspire against Gemini. With Isaac's help, Teja plots and kills Kai. Gemini is infuriated and decides to settle the issue, confronting Teja. During the fight, Gemini beats up Teja and swaps their clothes, leaving Teja bound and gagged. The new DGP arrives and shoots Teja, disguised as Gemini, dead. While the DGP grieves for Teja's death, he receives news that he has been transferred to the Sewage Control Board.

Director of Photography
A Venkatesh 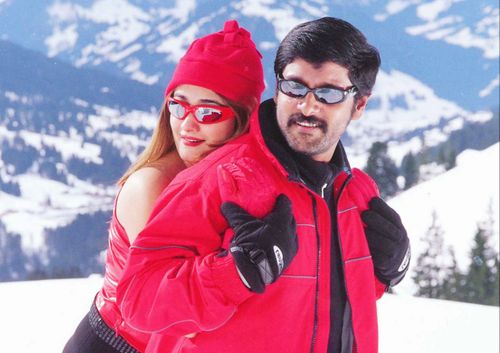