Cancel
A musical about teens in love in the 50's! It's California, 1959 and greaser Danny Zuko and Australian Sandy Olsson are in love. They spend time at the beach, but when they go back to school, what either of them don't know is that they both now attend Rydell High. Danny's the leader of the T-Birds, a group of black-jacket greasers while Sandy hangs with the Pink Ladies, a group of pink-wearing girls led by Rizzo. When they clash at Rydell's first pep rally, Danny isn't the same Danny at the beach. They try to be like each other so they can be together.
See Storyline (May Contain Spoilers)

In the summer of 1958, local boy Danny Zuko (John Travolta) and vacationing Sandy Olsson (Olivia Newton-John) meet at the beach and fall in love. When the summer comes to an end, Sandy—who is going back to Australia—frets that they may never meet again, but Danny tells her that their love is "only the beginning". The film moves to the start of the seniors' term at Rydell High School. Danny, a greaser, is a member of the T-Birds, consisting of his best friend Kenickie (Jeff Conaway), Doody (Barry Pearl), Sonny (Michael Tucci), and Putzie (Kelly Ward). The Pink Ladies, a popular clique of girls, also arrive, consisting of Rizzo (Stockard Channing), Frenchy (Didi Conn), Marty (Dinah Manoff), and Jan (Jamie Donnelly).

After her parents decide not to return to Australia, Sandy enrolls at Rydell and is befriended by Frenchy, who considers dropping out of school to become a beautician. Unaware of each other's presence at Rydell, Danny and Sandy tell their respective groups the accounts of events during the pair's brief romance, without initially mentioning the other's name. Sandy's version emphasizes the romance of the affair, while Danny's version is more sexual (and therefore presumably less honest).

When Sandy finally says Danny's name, Rizzo arranges a surprise reunion for the two, but Danny is forced to maintain his bad-boy attitude in front of his pals, upsetting Sandy, who storms off. Frenchy invites the girls to a pajama party, but Sandy falls ill from trying a cigarette, drinking and getting her ears pierced by Frenchy. The T-Birds almost crash the party in Kenickie's Greased Lightning car, but a guilty Danny leaves, followed by Rizzo, who departs to make out with Kenickie, who later becomes her boyfriend.

The two are disturbed by Leo (Dennis C. Stewart), leader of the T-Birds' rival gang, the Scorpions, and his girlfriend Cha-Cha (Annette Charles), leading to a planned car race between Leo and Kenickie. In an attempt to impress Sandy, Danny turns to Coach Calhoun (Sid Caesar) to get into sports, eventually becoming a runner. He reunites with Sandy and they attempt to go on a date, but their friends crash it, resulting in Kenickie and Rizzo arguing and parting. Left alone, Frenchy is visited by a guardian angel (Frankie Avalon) who advises her to return to school after a mishap in beauty class leaves her with candy-pink hair.

The school dance arrives, broadcast live on television and hosted by DJ Vince Fontaine, (Edd Byrnes) who flirts with Marty. Rizzo and Kenickie attempt to spite one another by bringing Leo and Cha-Cha as their dates, while Danny and Sandy arrive together. They dance well and are expected to win, but just before the winners are announced they are separated by Sonny, and Danny and Cha-Cha (who were once boyfriend and girlfriend) end up performing together and winning.

Danny tries to make it up to Sandy by taking her to a drive-in theater but makes a clumsy pass at her, causing Sandy to leave. Meanwhile, Rizzo fears she is pregnant after missing a period and confides in Marty, but Marty tells Sonny and he inadvertently spreads the rumor to Kenickie, the apparent father, though Rizzo denies this to him.

The race arrives, but Kenickie is knocked out by his own car door thanks to the careless behavior of his friend Putzie, so Danny takes up the challenge. He and Leo race until Leo crashes and leaves humiliated, with Danny as the victor. Sandy watches from afar, concluding she still loves Danny, and decides to change her attitude and look to impress him - she then asks Frenchy for help to achieve this goal. On the last day of school, while Principal McGee (Eve Arden) and her assistant Blanche (Dody Goodman) sob about the departing class, the class celebrates their graduation at the fair on the school grounds.

Rizzo discovers she is not pregnant after all and reunites with Kenickie. Danny has become a jock, but is shocked when Sandy arrives with a new hairstyle and dressed in a tight leather catsuit and is seen smoking (although she still looks over at Frenchy to check what to do when Danny notices her). In song, the two admit they love each other and reunite.

Tagline: The original high school musical is back!

Based on 0 rating
0 user 2 critic
Did you know? This movie was considered as the third highest-grossing movie of all time behind only Jaws (1975) and Star Wars: Episode IV - A New Hope (1977). Read More
2 Critic Reviews

It’s still a sugar-rush of a film.
Peter Bradshaw, The Guardian
0

Great fun no doubt if you don’t give a damn for the cinema but disappointingly full of holes if you do
Derek Malcolm, The Guardian
0

Continuity
As Rizzo being escorted into the dance hall by the leader of the Scorpions, he removes his sunglasses in the scene whereas in the next shot, we see him remove them again.

Continuity
In the drag race after the white Ford jumps the hood pops open, the grille falls out of place, and the trunk opens up, but in the next shot the only damage is a crooked bumper.

Revealing Mistakes
Marty's kneepad exposed when sliding at the end of the big dance sequence.

Revealing Mistakes
In "Greased Lightning" when the motor is dropped in the car and the fan is spinning, a string can be seen for a second making the fan spin.
Trivia:
To the fact Rizzo's hickeys were real, Stockard Channing said this in an interview that Jeff Conaway insisted on applying them himself.

"You're the One That I Want" actually took just one afternoon to film.

This movie was considered as the third highest-grossing movie of all time behind only Jaws (1975) and Star Wars: Episode IV - A New Hope (1977).

Henry Winkler, who became a sensation as "Fonzie" on Happy Days (1974), was also considered for the role of Danny Zuko. However, he turned down the role for fear of being typecast. 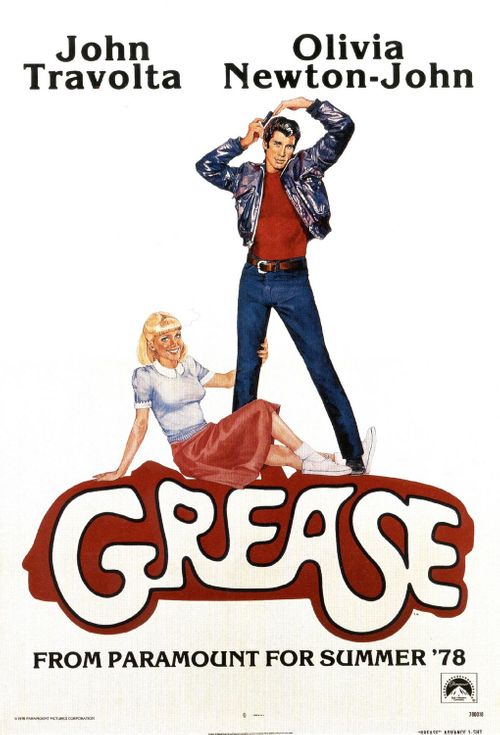