Cancel
Roshni Chadha makes her living, singing in various places and this makes her the breadwinner of her home. She soon gets to meet the handsome and wealthy Rahul Malhotra, who finds out that she can actually sing professionally and he helps her to attain this goal, which soon became a success and Roshni falls in love with Rahul and finds out that he has the same feelings for her. On a foreign trip, Roshni is arrested by the police for having in her possession cocaine, Rahul disappears leaving Roshni in hot-soup and now she must prepare to undergo her prison terms as there is no one to help her.
See Storyline (May Contain Spoilers)

Roshni (Sridevi) is the only child of Sharda Chhadha (Reema Lagoo). Her father, Prakash Chhadha (Anupam Kher), left before she was born and she has no knowledge of where he went. Roshni is introduced to Rahul Malhotra (Rahul Roy) and they share a mutual attraction. When he learns that she is an aspiring singer, he assists in her career so she becomes popular. She has a devoted fan named Jaggannath alias Jaggu (Sanjay Dutt), who is a petty thief. He is in love with her but she rejects him. During a trip she and Rahul had taken to Hong Kong, she is arrested for trafficking cocaine and Rahul disappears. Jaggu brings an attorney, but she is quickly found guilty and sentenced to death. Jaggu visits the prison and runs afoul of two guards, themselves lovers, who beat him in front of Roshni. The attorney works to help them escape. A fight ensues between Roshni and the female guard in which the latter is killed. The warden intervenes and is killed by Jaggu. They escape and return to India. At the airport Prakash is questioned by the police and Roshni learns that he is her father, and that he had fled the country years earlier when he has been wrongfully accused of treason. Later at Rahul's house, Rahul admits that he had been dealing with drugs that resulted in Roshni's arrest. She slaps him for deceiving her and ends their relationship. With Prakash's blessings, Roshni and Jaggu get married.

Tagline: Innocence trapped in the world of crime

Based on 2 ratings
0 user 0 critic
Did you know? This is the only film to star Sanjay Dutt and Sridevi together. Read More
0 User Reviews
No reviews available. Click here to add a review.
Cast

Rahul Roy's scenes were largely edited out of the film. He was to be the second hero, but ended up being billed for a special appearance.

This is the only film to star Sanjay Dutt and Sridevi together.

Sanjay Dutt and Sridevi were supposed to work together again after 25 years for Dharma Productions' Kalank (2019), but due to Sridevi's tragic death, she was replaced by Madhuri Dixit. 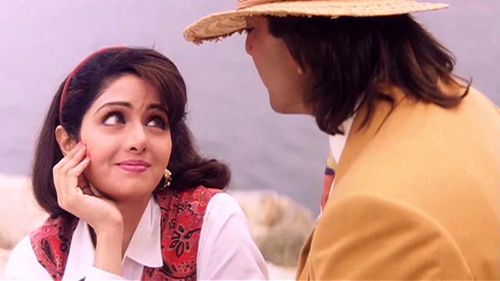