Cancel
Brimming with intrigue and adventure, this magical fantasy thriller is the fourth instalment of the Harry Potter series, and details his fourth year of schooling at the Hogwarts School of Witchcraft and Wizardry. Just before the end of the summer holidays, Harry and his friends get tickets to The Quidditch World Cup Final but after the match is over, people dressed like Lord Voldemort's 'Death Eaters' set a fire to all the visitors' tents, coupled with the appearance of Voldemort's symbol, the 'Dark Mark' in the sky, which causes a frenzy across the magical community. That same year, Hogwarts is hosting 'The Triwizard Tournament', a magical tournament between three well-known schools of magic : Hogwarts, Beauxbatons and Durmstrang. The contestants have to be above the age of 17, and are chosen by a magical object called Goblet of Fire. On the night of selection, however, the Goblet spews out four names instead of the usual three, with Harry unwittingly being selected as the Fourth Champion. Since the magic cannot be reversed, Harry is forced to go with it and brave three exceedingly difficult tasks. How will Harry deal with the dangerous challenges, charged emotions and deadly traps that lie ahead of him?
See Storyline (May Contain Spoilers)

Embedded with magic and danger, this fantasy thriller is the fourth instalment of the Harry Potter series and begins with Harry dreaming of of Frank Bryce, who is killed after overhearing Lord Voldemort discussing plans with Peter "Wormtail" Pettigrew and Barty Crouch Jr. At the Quidditch World Cup, Death Eaters terrorise the spectators, and Crouch Jr. summons the Dark Mark, otherwise known as the curse "Morsmordre".

Later at Hogwarts, Albus Dumbledore introduces ex-Auror Alastor "Mad-Eye" Moody as the new Defence Against the Dark Arts teacher. He also announces that the school will host the Triwizard Tournament where three magical schools are going to compete against each other in a very deadly competition by facing three dangerous challenges.

The champions are selected by the Goblet of Fire: Cedric Diggory of Hufflepuff is chosen to represent Hogwarts, Viktor Krum will represent Durmstrang Institute, and Fleur Delacour will represent Beauxbatons Academy of Magic. The Goblet unexpectedly chooses a fourth champion: Harry Potter.

Dumbfounded, Dumbledore is unable to pull the underage Harry out of the tournament, as the Ministry official Barty Crouch, Sr. insists that the champions are bound by a contract, and therefore, Harry is invited to compete. This makes Harry's best friend Ron Weasley and other mates of Gryffindor jealous of Harry.
For the tournament's first task, the champions must each retrieve a golden egg guarded by a dragon. Harry, succeeds after he summons his broomstick to retrieve the egg, which contains information about the second challenge.

Shortly after, another event known as the Yule Ball dance takes place, during which Harry's crush Cho Chang attends with Cedric, and Hermione Granger attends with Viktor, which renders Ron jealous. During the second task, the champions are instructed to dive underwater to rescue their mates; Harry comes out last but is placed second behind Cedric due to his 'moral fiber'. Afterwards, Barty Crouch Sr. is found dead by Harry.

In the third and final task, the competitors are placed inside a hedge maze and must reach the Triwizard Cup. Viktor, under the Imperius curse, incapacitates Fleur. After Harry saves Cedric when the maze attacks him, the two claim a draw and grab the cup together, which turns out to be a Portkey and transports the two to a graveyard, where Wormtail and Voldemort are waiting.

Wormtail kills Cedric with the Killing Curse and performs a ritual using a bone of Voldemort's father, Wormtail's flesh and Harry's blood, which rejuvenates Voldemort, who then summons the Death Eaters. Voldemort releases Harry in order to beat him in a duel to prove he is the better wizard.

Harry is unable to defend himself, but tries the Expelliarmus charm at the same moment Voldemort attempts the Killing Curse. Their wands cannot work against each other (as they both contain a feather from the same phoenix, Fawkes), so Voldemort's wand is forced to disgorge the last spells it performed.

This results in shadow impressions of the people he murdered appearing in the graveyard, including Harry's parents and Cedric. This provides an ample distraction to Voldemort and his Death Eaters, allowing Harry to escape with Cedric's body.

Upon his return, Harry tells Dumbledore that Voldemort has returned and is responsible for Cedric's death. Hogwarts grieves for Cedric. Mad-Eye takes a devastated Harry back to his room, locks the door, and admits that it was he who put Harry's name in the Goblet, cursed Viktor and was responsible for all the things gone wrong and tries to attack Harry. Dumbledore, Severus Snape, and Minerva McGonagall break down his door and force him to drink a truth telling potion.

It's also revealed that he is not "Mad-Eye" Moody; the real one is imprisoned in a magical trunk. The false Mad-Eye's Polyjuice Potion wears off and he is revealed as Barty Crouch Jr., working for Voldemort. Crouch Jr. is sent back to Azkaban prison, from which he had escaped. Soon after, Hogwarts, Durmstrang and Beauxbatons gather to bid farewell to Cedric.

Based on 1 rating
0 user 1 critic
Did you know? Alan Rickman wore black contact lenses for the role of Snape. Mike Newell was not aware of this until one day, when he was complimenting Alan on the amazing shade of his eyes, Alan leaned over and popped one of the lenses out. Read More
1 Critic Review

The Goblet of Fire is saturated, to positive ends, in greater sorrow and greater depth than any of the Columbus- or Cuarón-directed films
Sukhdev Sandhu, The Telegraph
0

Revealing Mistakes
In a few scenes, there is no mirror in Harry's glasses.

Revealing Mistakes
The light effects are steady instead of flickering due to the fire while Harry is talking to Sirius through the fire.

Miscellaneous
When Wormtail uses a knife to rip open Harry's shirt to get his blood, the shirt is already torn and the blood and wounds are already there even though he hasn't cut him yet.

Crew/Equipment Visible
You can see the camera's shadow on the left as the camera moves to look into Moody's "pit-like" suitcase.

Continuity
During the opening dinner, Neville switches positions at the table from beside Hermione to the other side of the table.

Continuity
Dean runs off when he's asked to get more towels for Harry when he gets out of the lake, but in the next shot Dean is still right next to Harry.

Continuity
Harry and Ron's hair is significantly shorter than in the following scene while spying on Neville practicing for the Yule Ball.

Audio/Video Mismatch
The orchestra includes a couple of boys playing saxophones which are not actually heard in the score being played during the waltz scene.
Trivia:
In the entire film, Viktor Krum who is played by Stanislav Lanevski has only two lines in the entire film totaling 20 words.

During the underwater filming Daniel Radcliffe, a couple of the cast members, and all of the underwater crew posed for a photo which he later sent out as a Christmas card with Rudolph noses and antlers Photoshopped on everyone's faces.

Emma Watson actually tripped and fell down the stairs in the fancy dress during the first take of Hermione's "Cinderella Moment".

Alan Rickman wore black contact lenses for the role of Snape. Mike Newell was not aware of this until one day, when he was complimenting Alan on the amazing shade of his eyes, Alan leaned over and popped one of the lenses out. 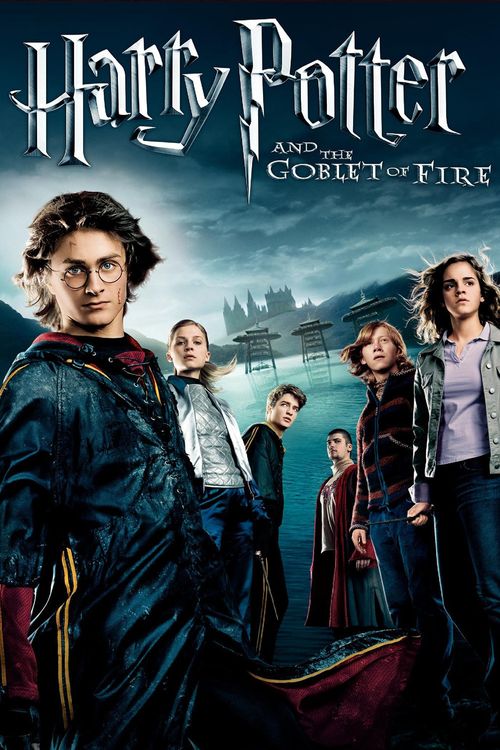 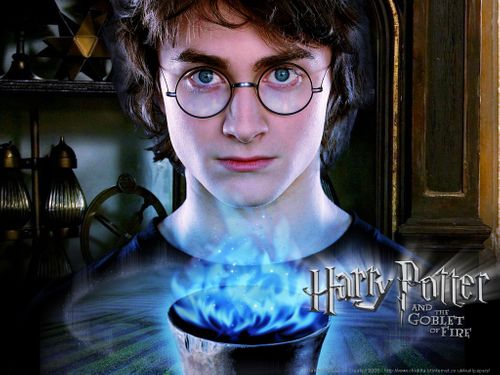 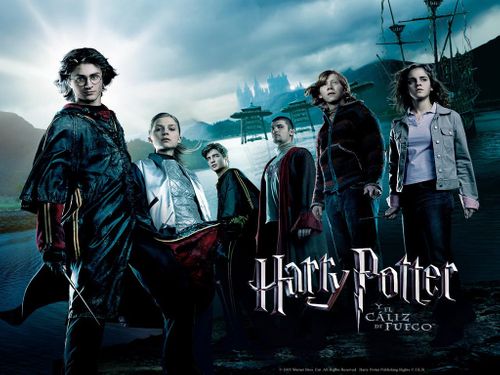 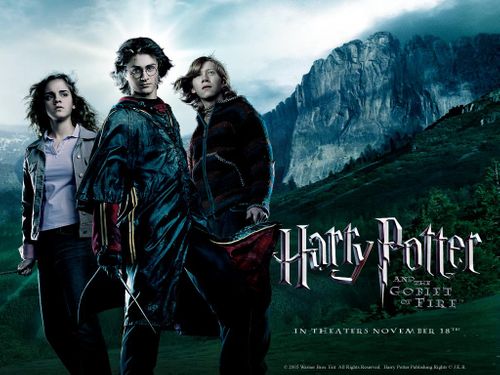 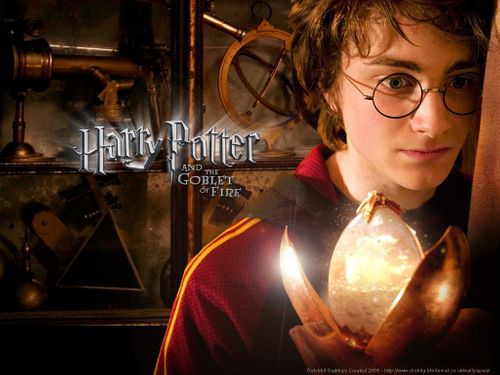 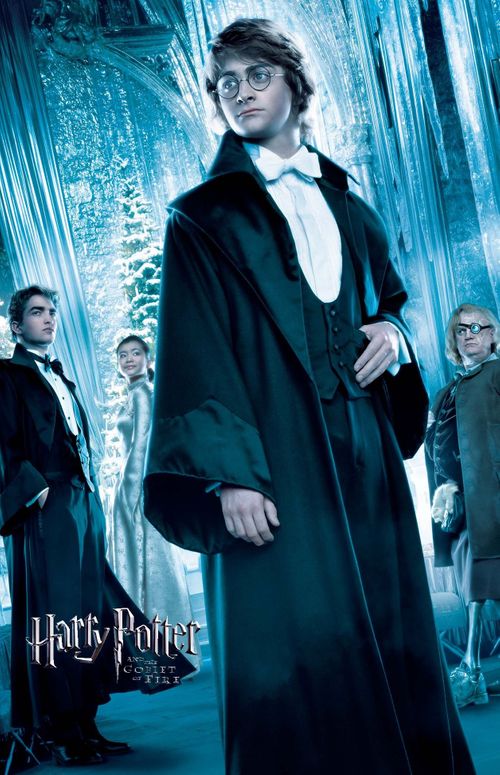 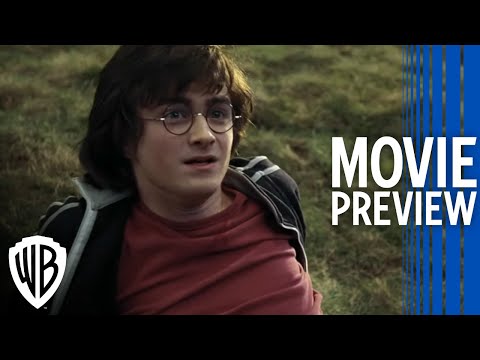 Harry Potter and the Goblet of Fire - Promo 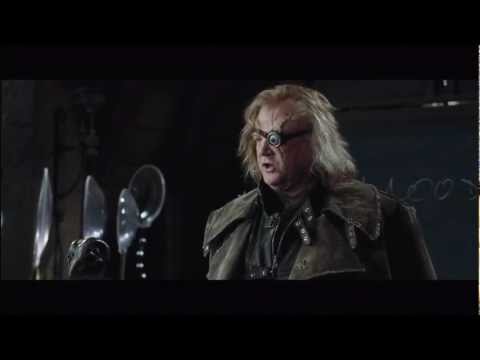 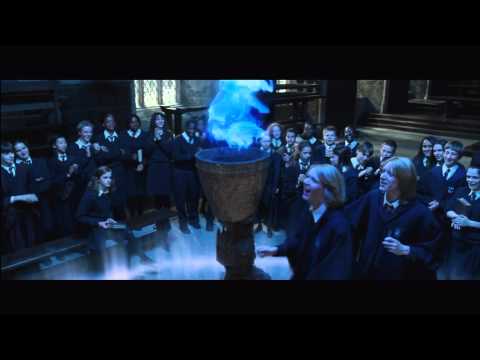 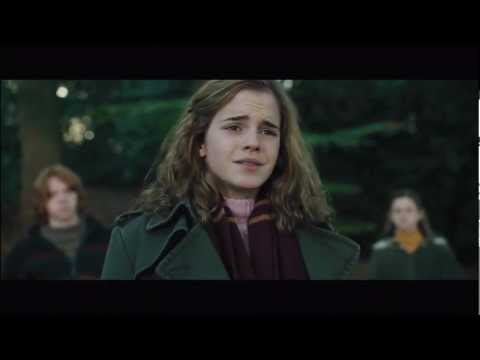 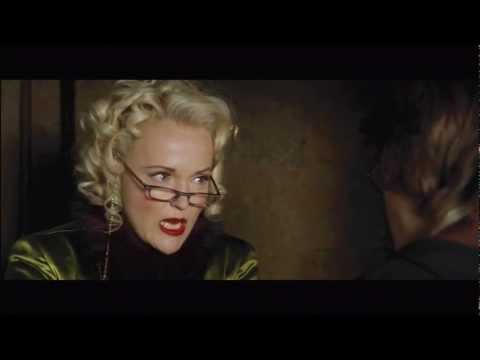 Harry Potter and the Goblet of Fire 2005