Cancel
Set in Hong Kong, 1962, Chow Mo-Wan is a newspaper editor who moves into a new building with his wife. At the same time, Su Li-zhen, a beautiful secretary and her executive husband also move in to the crowded building. With their spouses often away, Chow and Li-zhen spend most of their time together as friends. They have everything in common from noodle shops to martial arts. Soon, they are shocked to discover that their spouses are having an affair. Hurt and angry, they find comfort in their growing friendship even as they resolve not to be like their unfaithful mates.

Based on 0 rating
0 user 1 critic
Did you know? The original idea and inspiration for the film stemmed from a Japanese short story concerning two characters who often walk by each other in a stairwell, but do not converse. In that story the characters end up committing suicide. Read More
1 Critic Review

Editor
William Chang
Technical Details
Film Type:
Feature
Language:
Cantonese
Spoken Languages:
Cantonese, French, Spanish
Colour Info:
Color
Sound Mix:
Dolby Digital
Frame Rate:
24 fps
Aspect Ratio:
2.35:1
Stereoscopy:
No
Fun Stuff
Filming Locations:
Macau
Goofs:
Continuity
When the people of the house are using the rice cooker that Mr. Chan brought for the landlady from his trip, Mrs. Chan is reading a newspaper and the newspaper is wide open. When she tells Mr. Chow that she will tell her husband to buy a rice cooker for him, the newspaper is folded but when Mr. Chow walks away at the end of that chat, the newspaper is wide open again.

Continuity
At around 10:00, while they are using the rice cooker that Mr. Chan brought from his trip, Mrs. Chan's newspaper is inconsistently open/closed between shots.
Trivia:
During filming, Kar Wai Wong improvised often with the actors, crafting the story and mood of the film as he went along. Originally, "In the Mood for Love" was a much more obvious romance film, with the actors throwing witty dialog at each other and engaging in several scenes of love-making. Eventually, the actors and director decided to tone the mood down to the more subtle version that was released in theaters.

Maggie Cheung wears a different cheong-san dress in each scene. There were 46 in all, though not all made it to the final cut.

Filming was shifted from Beijing to Macau after Chinese authorities demanded to see the completed script. The director never uses scripts.

The number of the hotel room where Chow stays is 2046, which is the director's next feature length film.

Director Kar Wai Wong found the English title for "In the Mood for Love" while listening to a song from a Brian Ferry CD with a similar title, "I'm in the Mood for Love". It is a cover of a 1930s song with the same title, Kar Wai Wong used the title and the song in an early Hong Kong trailer of the film, and it was also used in the USA trailer of the film.

Kar Wai Wong was shooting the finale, and editing the film a little over a week before its debut at Cannes.

The original idea and inspiration for the film stemmed from a Japanese short story concerning two characters who often walk by each other in a stairwell, but do not converse. In that story the characters end up committing suicide. 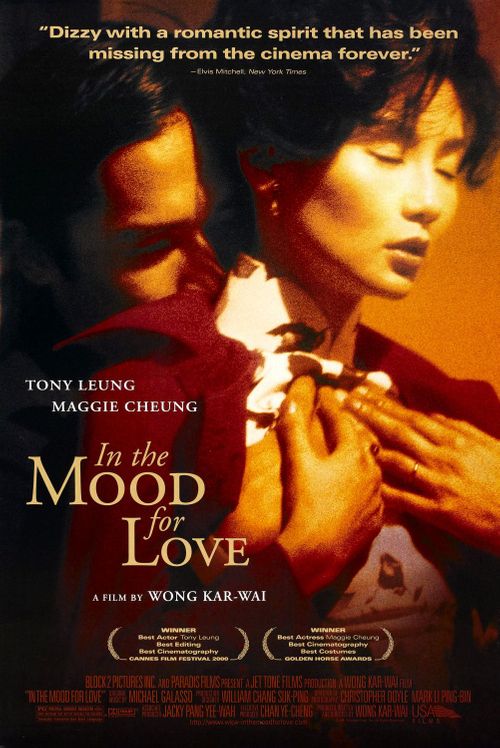