Hip Hop Tamizha's second outing packs a punch with its increased use of live instruments, albeit offering lesser variety
Siddarth Srinivas, Only Kollywood
0

From Aamabala’s enthusiastic debut, this one’s a bit of a let-down from Hiphop Tamizha
Karthik Srinivas, Milliblog
0

It has its own charm and it conveys that quite well, go for it if you’re in a mood to watch a sci-fi film, Kollywood style
Raisa Nasreen, BookMyShow
0

Indru Netru Naalai is an ingenious Sci-Fi Comedy which has been scripted well with all the ingredients in appropriate proportions.
by Sajid Ali on 28 Jun, 2015

How often do you find movies in Tamil Cinema, who go out of the way and try to entertain you out of the box, from the routine, hardly few come along those lines. One among them is debutante Ravi Kumar. These days small budget movies with upcoming young directors have been ringing the cash registers than the biggies. The audience have matured and have the knowledge of what is entertainment.

INN is a Sci-Fi-Comedy which takes you on a ride that you will enjoy thoroughly. The movie is based on time travel, which is been a fantasy of many over the period of years since the technology have been advancing at god speed, but still it remains a fantasy, with a question whether it could be possible. Our filmmakers never leave a chance to show us how and what could be done, if it becomes a reality. There are many Hollywood flicks based on this subject, but in our country hardly anyone goes that extra mile called Science Fiction. One main reason being the budget, that’s where INN stands out, with a small budget they made a convincing Sci-fi movie which astounds with their work.

Vishnu, the way he started and where he is now is a great travel in short period of time. He’s got the potential for many varied roles and we can expect him to out do every role he does. In this he was given a lighter mode where he plays a VIP(Velai Illa Pattadhaari), who has this dream to start something on his own rather bend in front of someone. His character was well done, which was laced with mild sense of humor making it an interesting one.

Mia George, with her 2nd film in Kollywood, she gives a strong statement of making it good in the industry for long. She did a fine job for the screen time given to her, she looks damn cute in the traditional outfits and fits the girl next door aptly.

Karunakaran, from short films to feature films he has made his mark in every movie he’s been part of, his way of comedy is totally different from others. He makes you laugh hard as usual with his peculiar style. I loved every bit of his character.

Sai Ravi the main villain in the movie have done a great job, as far as my knowledge I haven’t seen him before but he’s a reputed actor in Telugu industry, he did a commendable job as “Kuzhandaivelu“.

Another notable character in the movie is “Giridhara Parthasarathy” played by T.M.Karthik. He plays a scientist who is not only apt for the role but made you laugh out loud. He did a great job.

Then comes the technical team of the movie. The VFX team has done an astounding job in creating that “Time Machine” which for even one second did not look bad on screen, the detailing was perfect, the time travel was perfect. They really did a good job. The cinematography was splendid Vasanth handled the camera with panache and had a keen eye. Leo John Paul put it all together with his impeccable editing.

Hiphop Tamizha is slowly growing as a music director. His tracks are more mixes than film songs, but the BGM was good, really liked that part and it suits this movie.

Ravi Kumar made sure to keep even the tiniest detail in mind while weaving this story, and wove a film which came out entertaining at all levels. The time travels were timed well, especially the black and white sequence was quite an hilarious one.

Indru Netru Naalai is an ingenious Sci-Fi Comedy which has been scripted well with all the ingredients in appropriate proportions, doesn’t deviate from it’s course and keeps you entertained throughout with endless laughs, which lasts until the credits roll with audience standing up applauding with cheers.

I like that movie. In first time tamil industry i seen the time machine movie. Awesome editing and screen play.

Director of Photography
A Vasanth 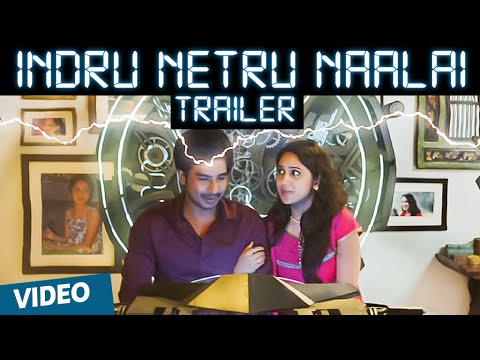 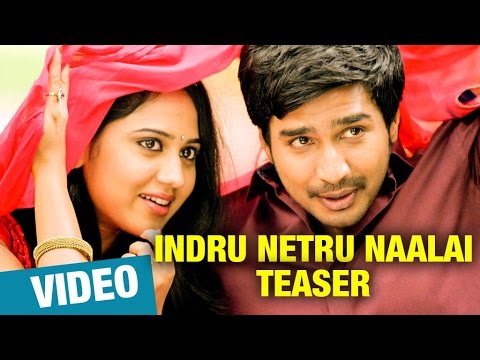 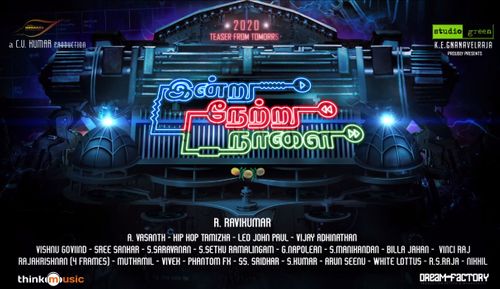 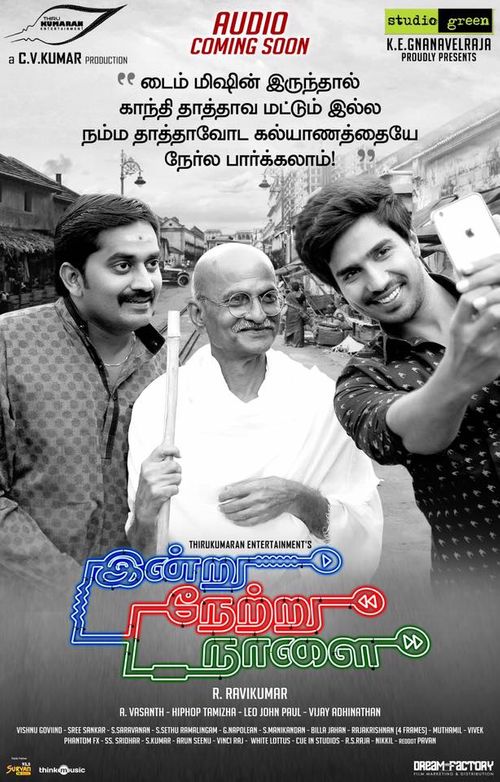 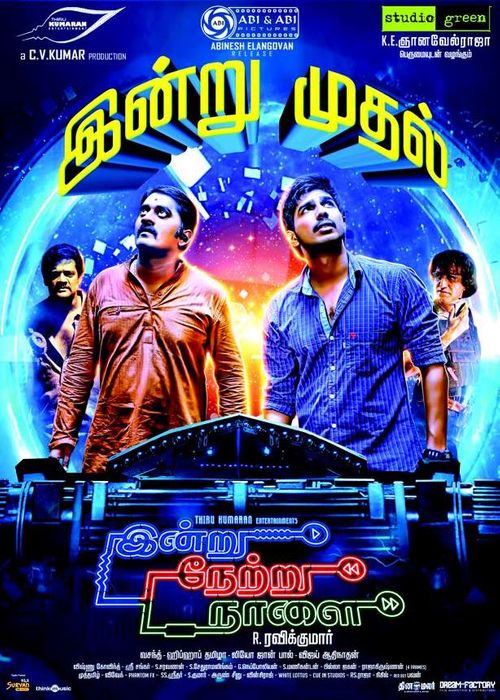 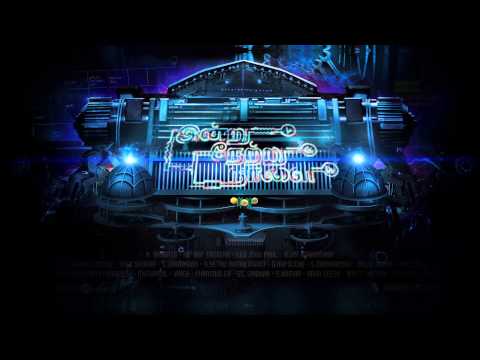 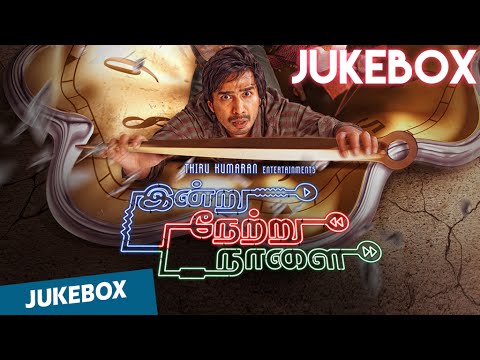 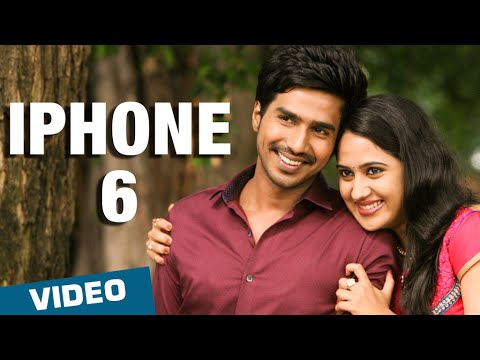 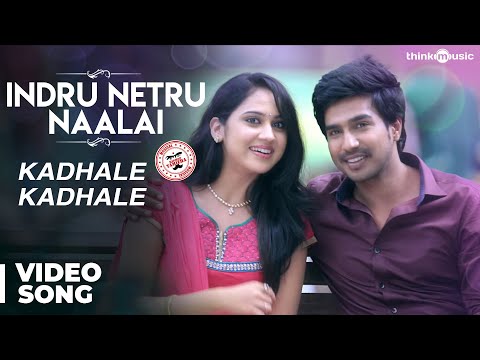 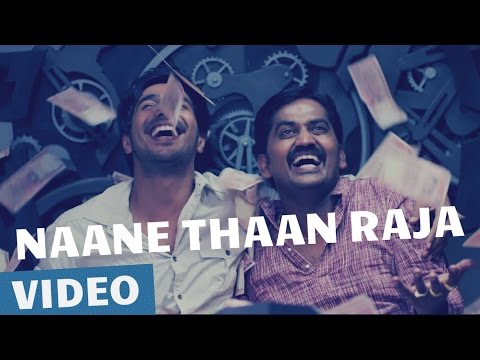 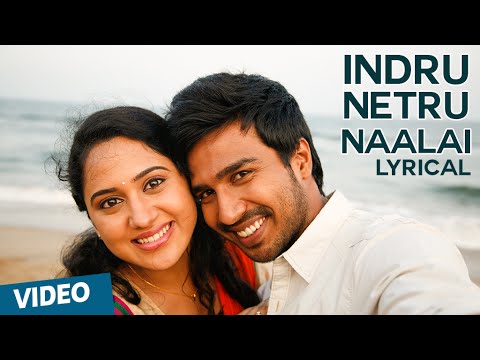 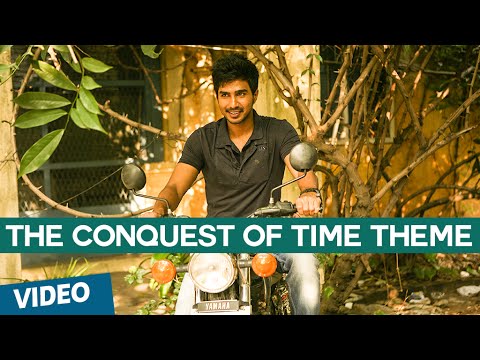 5. The Conquest of Time Theme 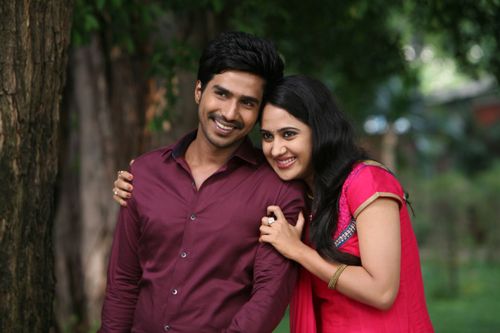