Cancel
Evocative and intense, this thrilling war drama tells the fictional alternate history story of two plots to assassinate Nazi Germany's political leadership, one planned by a young French Jewish cinema proprietor (Laurent), and the other by a team of Jewish-American soldiers led by First Lieutenant Aldo Raine (Pitt). In Nazi-occupied France, young Jewish refugee Shosanna Dreyfus witnesses the slaughter of her family by Colonel Hans Landa. Narrowly escaping with her life, she plots her revenge several years later when German war hero Fredrick Zoller takes a rapid interest in her and arranges an illustrious movie premiere at the theater she now runs. With the promise of every major Nazi officer in attendance, the event catches the attention of the "Basterds", a group of Jewish-American guerilla-soldiers led by the ruthless Lt. Aldo Raine. As the relentless executioners advance and the conspiring young girl's plans are set in motion, their paths will cross for a fateful evening that will shake the very annals of history.
See Storyline (May Contain Spoilers)

Embedded with intense combat action and charged emotions, this war drama is set in 1941, where SS colonel Hans Landa, nicknamed "The Jew Hunter", interrogates French dairy farmer Perrier LaPadite. During the conversation, Landa switches from French to English, and explains his nickname and origin, comparing himself to Reinhard Heydrich and also politely asking for a glass of milk.

He explains his tactics to LaPadite, revealing he knows many hideouts of Jews, and tells him that his family will be freed if he gives information. In tears, LaPadite reveals that the Dreyfuss family of Jews is hidden under the floor. Landa switches back to French, pretends to leave, and then orders SS soldiers to shoot through the floorboards and kill the family, but allows teen-aged Shosanna to escape.

In the spring of 1944, 1st Special Service Force Lieutenant Aldo Raine recruits eight Jewish-American soldiers for a mission behind enemy lines, telling them they each owe him 100 Nazi scalps and will take no prisoners. Their number swells to nine when they learn of Staff Sergeant Hugo Stiglitz, a German soldier who was imprisoned awaiting transfer to Berlin for murdering thirteen Gestapo officers. The Basterds learn the location of the jail he's being held in, kill all the guards and invite Stiglitz to join the Basterds, which he accepts.

Adolf Hitler personally interviews a Nazi soldier, Private Butz, who relates how his squad was ambushed and his sergeant beaten to death with a baseball bat by Staff Sergeant Donny Donowitz, the "Bear Jew", when the sergeant refused to divulge information. Butz survived by providing the information (a fact which he hides from Hitler), but Raine carves a swastika into his forehead with a knife so he can never escape identity with the Nazis. Hitler gives orders to stop the spreading of the Basterds's activity.

In June 1944, Shosanna Dreyfus, who has adopted the alias "Emmanuelle Mimieux", runs a cinema in Paris. She meets Fredrick Zoller, a German sniper whose heroism as a sole survivor who killed over 200 soldiers, is to be celebrated in a Nazi propaganda film, Stolz der Nation (Nation's Pride), starring as himself. In love with Shosanna, Zoller convinces Joseph Goebbels to hold the premiere at her cinema.

Shosanna seizes the opportunity, secretly resolving with her black projectionist and lover, Marcel, to burn down her cinema and kill the top Nazi leaders at the premiere. Meanwhile, Lieutenant Archie Hicox, a British film critic specialising in German cinema, is recruited for "Operation Kino" by British General Ed Fenech and Prime Minister Winston Churchill. Hicox will rendezvous with their double agent, German film star Bridget von Hammersmark, and the Basterds (Raine's squad), and infiltrate and plant explosives at the premiere.

Hicox goes with Hugo and Wicki, both German speakers, and they meet von Hammersmark at a tavern, where a German soldier, Wilhelm, is celebrating his son's birth with his friends and von Hammersmark, who also writes an autograph for his son as a gift. A Gestapo officer at the tavern notices Hicox's odd German accent and becomes suspicious. Hicox convinces the officer that he is from the German mountains and fabricates his appearance in a Nazi film to the officer, who is pleased.

However, Hicox gives himself away by ordering glasses with the incorrect hand gesture, causing the officer to silently pull a gun to Hicox's crotch. However, Hicox reveals that he did the same thing and Hugo pulls his gun out, and they try to force the officer to leave the tavern with him. When the officer refuses, Hugo blows his testicles off and kills him but not before the officer kills Hicox.

Hugo's move alerts the other German soldiers, who open fire. Hugo and Wicki retaliate, killing all the soldiers and the barmen but Wilhelm opens fire with a machine-gun and murders the rest, except for Von Hammersmark. Wilhelm negotiates with Raine, who will let him go if he agrees to let her go. Wilhelm puts down his weapon, but Hammersmark immediately guns him down afterward.

Later on, Landa arrives at the site while investigating the tavern shooting, and recognizes Hugo and Hicox, becoming suspicious. He also finds Von Hammersmark's autograph and her missing shoe. Though his German-speaking men are dead, Raine, upon learning from von Hammersmark that Hitler himself will be attending the premiere, decides to go ahead with the mission anyway.

He, Donowitz, and Ulmer pose as von Hammersmark's Italian escort and cameramen, hoping their limited Italian will fool Germans unfamiliar with the language, while Von Hammersmark puts a cast on her injured leg and fabricates a story of injuring her leg while mountain climbing.

At the premiere, Landa, who speaks Italian fluently, is not fooled by von Hammersmark's companions nor her mountain story, and sees her privately. He makes her put on the shoe, which fits perfectly, and suddenly strangles her to death, before ordering Raine's and Private Smithson Utivich's capture. Landa, using Hermann, his radio operator, orders Raine to contact his superior with the OSS and brokers a deal: in exchange for not hindering the explosives plan and thus ending the war, he receives immunity, U.S. citizenship, financial security, and the Medal of Honor for himself and the rest of the members of the operation.

During the screening, Zoller slips away to the projection room to see Shosanna, who rejects him. He tries to force himself on her, but she relents and tells him to lock the door. With his back turned, she fatally shoots him, but he manages to turn and fatally shoot her as well. Meanwhile, Ulmer and Donowitz manage to dispatch the soldiers guarding Hitler.

As Zoller's film reaches the climax, a spliced-in clip of Shosanna's cackling in the cinema informs the audience that they are about to be killed by a Jew. Marcel, having locked the cinema, ignites a pile of extremely flammable nitrate film behind the screen, as Shosanna laughs at their fates. Ulmer and Donowitz burst into the screening as it burns and riddle Hitler, Goebbels, and the trapped crowd with submachine gun fire, until the bombs go off and destroy the cinema, also killing Ulmer and Donowitz.

Landa and Hermann drive Raine and Utivich into Allied territory, where they surrender. To Landa's horror, Raine shoots Hermann and has Utivich collect his scalp, and for the first time, Landa shows no arrogance but fear. Raine is unable to accept the notion that Landa might go unpunished for his career as a Nazi officer, so he carves a swastika into his forehead as a permanent reminder of his crimes as Landa screams. Proudly inspecting his handiwork, he remarks to Utivich that "this just might be my masterpiece."

Based on 0 rating
0 user 0 critic
Did you know? This is Quentin Tarantino's highest-grossing film since Pulp Fiction (1994). Read More
0 User Reviews
No reviews available. Click here to add a review.
Cast

Character Error
In a scene where the British soldier Lt. Archie Hicox is introduced to his superiors, he is instructed to "stand at ease" which is still a formal position, but Hicox "stands easy", which allows him to relax arms and move the feet.

Character Error
Hugo Stiglitz is shown slowly sharpening his knife in one shot and at the end of each stroke there is an ominous "shhhlick" sound as he twists the blade with a flick. This would actually remove the edge he is attempting to sharpen, and dull the blade.

Character Error
In a scene where Eric hands a glass to Bridget, he calls her "Frau" instead of "Fräulein." "Frau" implies she is married and/or elderly, which Bridget isn't.

Character Error
Fenech salutes with no head dress on, which is acctually an incorrect British military custom. The same is true for the German soldiers in the bar.

Character Error
Landa says to Lapadite that Hitler fetched him from Austria. But to the fact Austria was a part of the German Reich at the time and was called "Ostmark".

Continuity
At the end of the film, Landa is handcuffed by Utivich, but when he is being "marked" by Raine, his hands are free and gripping the soil.

Continuity
The level of beer in the glass, shaped like a boot, of the Nazi-officer in the basement pub, which changes between shots.

Factual Mistake
Standartenfuhrer Landa is wearing the correct rank patches on his collar, but in few scenes they are pointing in the wrong direction.
Trivia:
Quentin Tarantino worked on the script of this film for almost a decade.

One of the Jewish names carved on The Bear Jew's bat is Anne Frank.

This is the first Quentin Tarantino film to win an Oscar for acting Christoph Waltz for Best Supporting Actor. Waltz later won the same Oscar again for Tarantino's Django Unchained.

Christoph Waltz's character speaks the most different languages in the movie: 4 such as English, French, German, and Italian.

This is Quentin Tarantino's highest-grossing film since Pulp Fiction (1994).

In 'Quentin Tarantino's Universe', the character of Lt Aldo Raine is Floyd's - aka The pothead on the couch from True Romance (1993) great-grandfather.

Christoph Waltz dubbed his own performance in the German version.

As of 2010, this is Quentin Tarantino's film with the most Academy Award nominations (8).

British actor Simon Pegg was originally set to play Lt. Archie Hicox but was forced to pull out of the project because of scheduling conflicts. Later Michael Fassbender replaced him.

Previously Jean Reno turned down the role of Perrier LaPadite.

According to Brad Pitt, the film was shot sequentially. 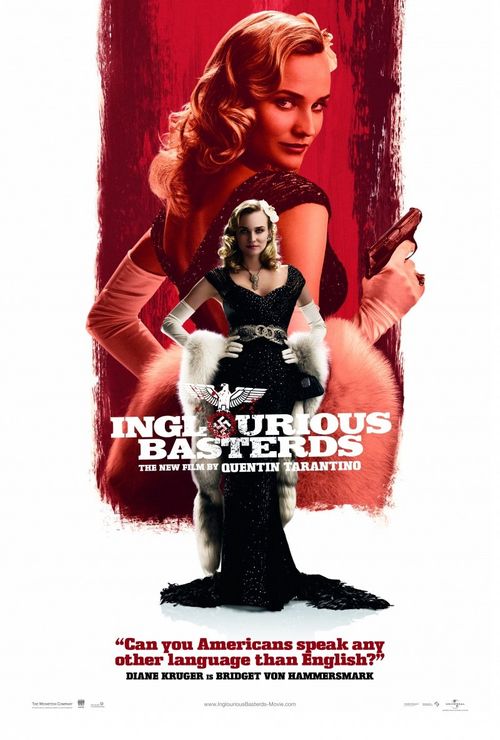 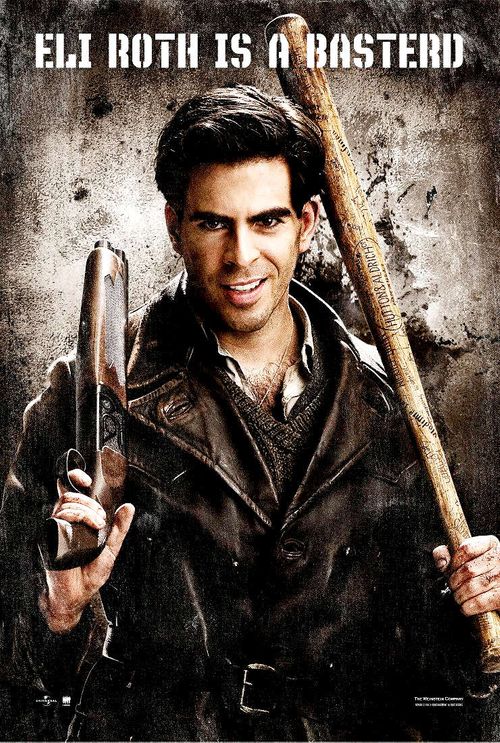 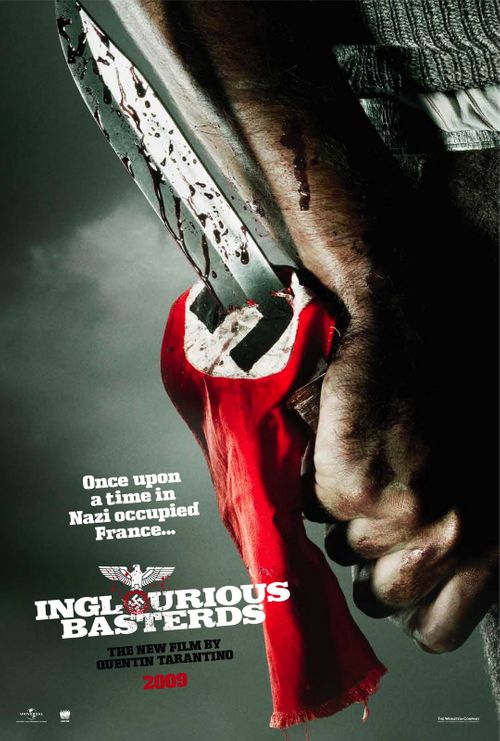 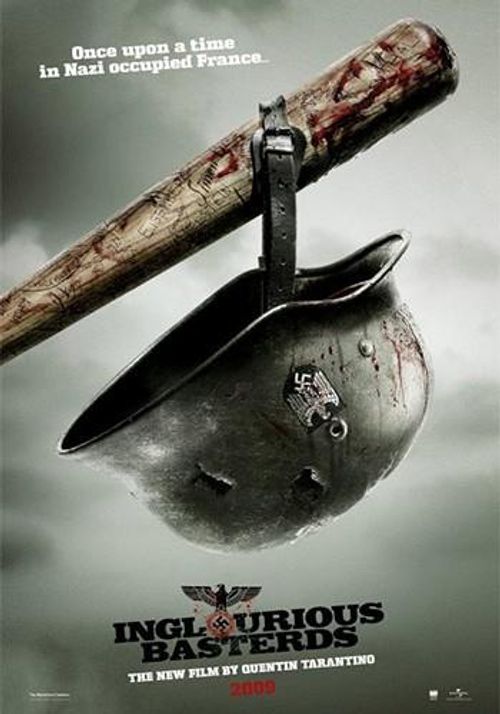 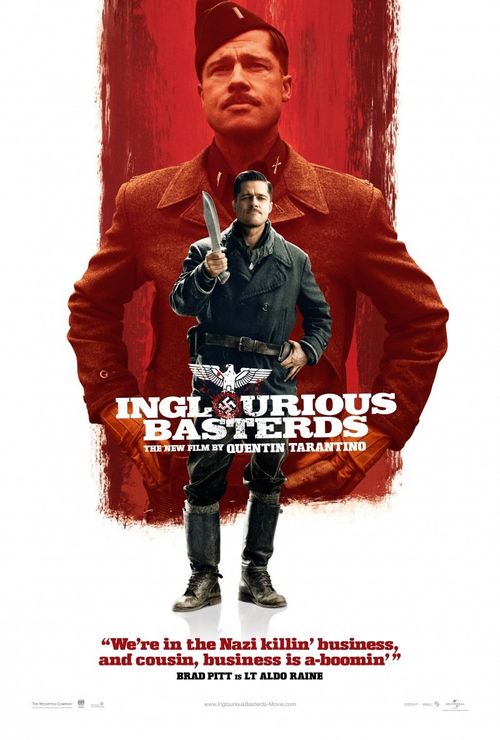 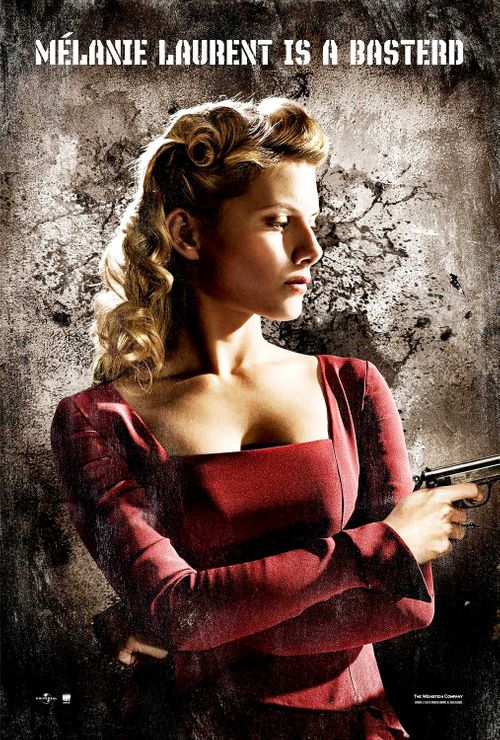 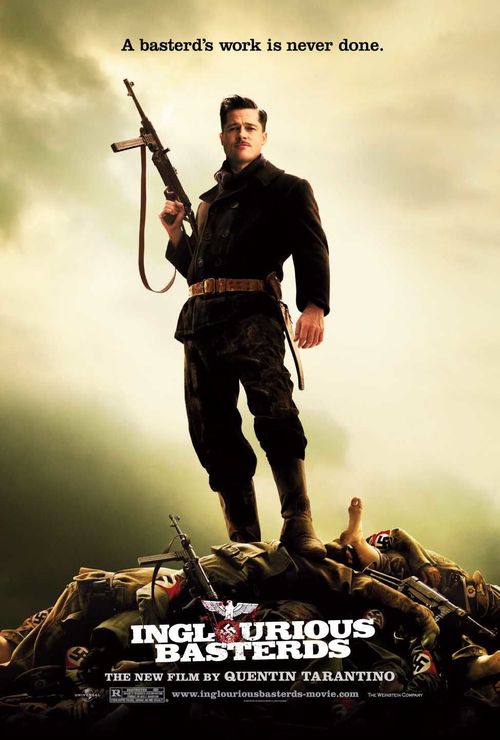