Cancel
This contemporary coming-of-age drama explores the tremendous complications and decisions faced by Juno, a whip-smart teen confronting an unplanned pregnancy by her classmate Bleeker (Michael Cera). With the help of her hot best friend Leah (Olivia Thirlby), Juno finds her unborn child a “perfect” set of parents: an affluent suburban couple, Mark and Vanessa (Jason Bateman and Jennifer Garner), longing to adopt. Luckily, Juno has the total support of her parents (JK Simmons and Allison Janney) as she faces some tough decisions, flirts with adulthood and ultimately figures out where she belongs.
See Storyline (May Contain Spoilers)

Sixteen-year-old Minnesota high-schooler Juno MacGuff (Ellen Page) discovers she is pregnant with a child fathered by her friend and longtime admirer, Paulie Bleeker (Michael Cera). She initially considers an abortion. Going to a local clinic run by a women's group, she encounters outside a schoolmate who is holding a rather pathetic one-person pro-life vigil. Once inside, however, Juno is alienated by the clinic staff's authoritarian and bureaucratic attitudes. She is particularly offended by their calling her "sexually active", a term which she feels demeans the highly emotional event by which she became pregnant. All of this decides her against abortion, and she decides to give the baby up for adoption. With the help of her friend Leah (Olivia Thirlby), Juno searches the ads in the Pennysaver and finds a couple she feels will provide a suitable home. She tells her parents, Mac (J.K. Simmons) and stepmother, Bren (Allison Janney), who offer their support. With Mac, Juno meets the couple, Mark and Vanessa Loring (Jason Bateman and Jennifer Garner), in their expensive home and agrees to a closed adoption.

Juno visits Mark a few times, with whom she shares tastes in punk rock and horror films. Mark, who has set aside his rock band youth (now confined to memorabilia displayed in the one room of the house that Vanessa has designated for Mark's personal belongings), works at home composing commercial jingles. Juno and Leah happen to see Vanessa in a shopping mall being completely at ease with a child, and Juno encourages Vanessa to talk to her baby in the womb, where it obligingly kicks for her.

As the pregnancy progresses, Juno struggles with the emotions she feels for the baby's father, Paulie, who is clearly in love with Juno. Juno maintains an outwardly indifferent attitude toward Paulie, but when she learns he has asked another girl to the upcoming prom, she angrily confronts him. Paulie reminds Juno that it is at her request they remain distant and tells her that she broke his heart.

Not long before her baby is due, Juno is again visiting Mark when their interaction becomes emotional. Mark then tells her he will be leaving Vanessa. Juno is horrified by this revelation, with Mark asking Juno "How do you think of me?" Vanessa arrives home, and Mark tells her he does not feel ready to be a father and there are still things he wants to do first. Juno watches the Loring marriage fall apart, then drives away and breaks down in tears by the side of the road. Returning to the Lorings' home, she leaves a note and disappears as they answer the door.

After a heartfelt discussion with Mac, Juno accepts that she loves Paulie. Juno then tells Paulie she loves him, and Paulie's actions make it clear her feelings are very much reciprocated. Not long after, Juno goes into labor and is rushed to the hospital, where she gives birth to a baby boy. She had deliberately not told Paulie because of his track meet. Seeing her missing from the stands, Paulie rushes to the hospital, finds Juno has given birth to their son, and comforts Juno as she cries. Vanessa comes to the hospital where she joyfully claims the newborn boy as a single adoptive mother. On the wall in the baby's new nursery, Vanessa has framed Juno's note, which reads: "Vanessa: If you're still in, I'm still in. —Juno." The film ends in the summertime with Juno and Paulie playing guitar and singing together, followed by a kiss.

Tagline: A comedy about growing up... and the bumps along the way.

Based on 0 rating
0 user 1 critic
Did you know? Original title of the movie was "Junebug", but was changed so it would not be confused with Amy Adams' Junebug (2005). Read More
1 Critic Review

The film has no wrong scenes and no extra scenes, and flows like running water.
Roger Ebert, Roger Ebert
0

Errors in Geography
When Juno pulls the van off the highway, mountains can be seen in the background of the long shot. There are no substantial mountain ranges in the Minneapolis/St. Paul area.

Continuity
In the scene where Juno goes to see Paulie at night and mentions how hard he's studying, when the camera changes angles there is nothing on the paper when he was clearly writing when she entered the room.

Continuity
As Juno and Leah sit in the trophy case scene and talking, the amount of food on Juno's shirt changes.

Continuity
In the scene where Vanessa is feeling Juno's belly at the mall, Juno's hair changes (tucked behind her ear from the front, free from behind).

Audio/Video Mismatch
In the scene where Juno encounters Vanessa outside in an elevator the mall scene, Juno states Vanessa's name in surprise but she mouths Jennifer (the actress' name rather than the character's name). The "J" can still be heard.

Character Error
In the scene where Juno is talking to Leah on the phone, she sarcastically says she is Morgan Freeman and asks if Leah has any bones that need collecting. Morgan Freeman wasn't in The Bone Collector.

Character Error
In the chromatography scene, the formula to work out the RF value is correct but an incorrect answer is given with 2 shown instead of 0.5.

Factual Mistake
In the scene where Juno goes for her abortion, Su-Chin informs her that her baby has fingernails. However, it is revealed Juno is only in her second trimester and babies don't develop fingernails until 32 weeks.
Trivia:
Juno was marked as the highest-grossing film of all five Best Picture Oscar nominees (2008).

Jason Reitman once said, in the final scene Vanessa actually drank real wine. When they finish shooting the scene, Jennifer Garner was a little bit drunk.

Juno was the first movie released by Fox Searchlight Pictures to gross the $100 million mark at the box office.

The hamburger phone seen in the movie is owned by the writer, Diablo Cody.

Juno's handwritten message in Bleeker's yearbook was to the fact written by Diablo Cody.

Original title of the movie was "Junebug", but was changed so it would not be confused with Amy Adams' Junebug (2005).

If you notice well no cell phones were used in the entire movie. 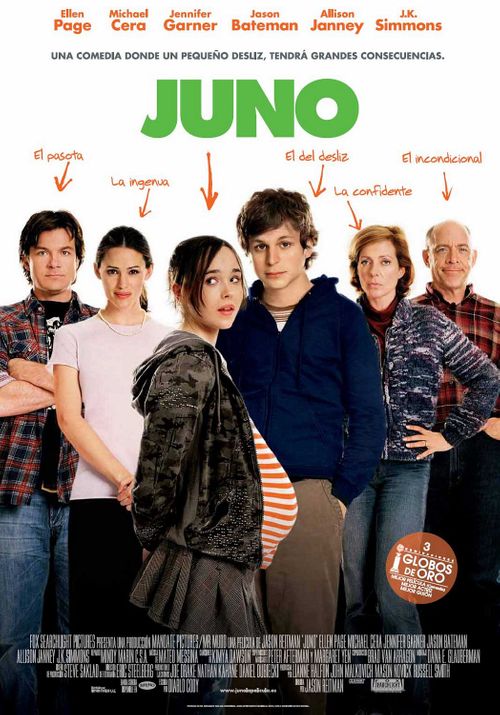 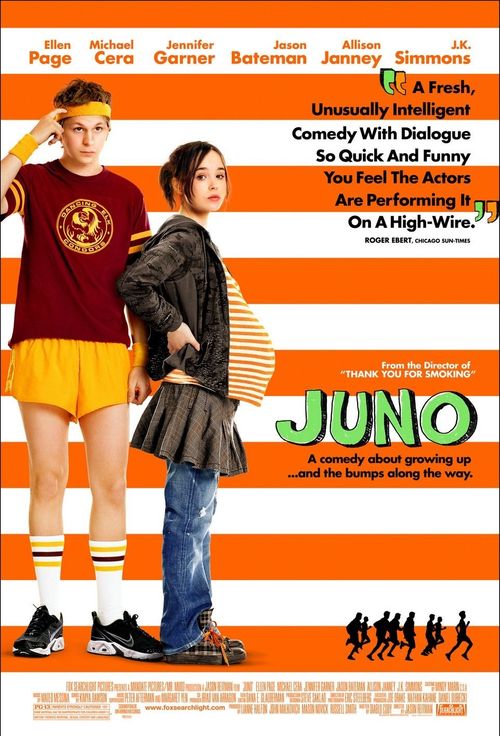