Cancel
Embedded with quirky comedy and soulful romance, this fantasy drama delves into the subject of time travel from a humorous perspective. Kate and her actor brother live in N.Y. in the 21st Century. Her ex-boyfriend, Stuart, lives above her apartment. Stuart finds a space near the Brooklyn Bridge where there is a gap in time. He goes back to the 19th Century and takes pictures of the place. Leopold -- a man living in the 1870s -- is puzzled by Stuart's tiny camera, follows him back through the gap, and they both ended up in the present day. Leopold is clueless about his new surroundings. He gets help and insight from Charlie who thinks that Leopold is an actor who is always in character. Leopold is a highly intelligent man and tries his best to learn and even improve the modern conveniences that he encounters. How will the relationship between Kate and Leopold unfold? Long-distance relationships have a way of getting complicated, but how will this relationship spanning time and space pan out?
See Storyline (May Contain Spoilers)

In 1876, Prince Leopold Mountbatten, Duke of Albany (Hugh Jackman), is a stifled dreamer. His strict uncle Millard (Paxton Whitehead) has no patience for his disrespect for the monarchy, chastising him and telling him he must marry a rich American, as the Mountbatten family finances are depleted. After his uncle told him that on his "thirtieth birthday he had become a blemish to the family name", Leopold counters that the new nobility is to be found in those who pursue initiatives, hence his interest in the sciences.

One day, the Duke finds Stuart Besser (Liev Schreiber), an amateur physicist (and descendant of Leopold) in his study perusing his schematic diagrams and taking photographs of them. He had seen him earlier at Roebling's speech about the Brooklyn Bridge, after he was laughing at the word 'erection'. Leopold follows Stuart and tries to save him from falling off the unfinished bridge, only to fall with him into a temporal portal between centuries that Stuart has used to travel to 1876.

Leopold awakens in 21st century New York. He is at first confused and thinks that he has been kidnapped. Stuart says that he has created formulae to forecast portals in the temporal universe and that Leopold must stay inside his apartment until the portal opens again a week later.

As Stuart takes his dog out, he is injured by falling into the elevator shaft, and is eventually institutionalized for speaking about his scientific discovery. (According to Stuart's books, Leopold's unintentional time travel to the 21st century has caused a disruption of all elevators, him leaving the 19th century before he could register for a patent.)

Leopold is intrigued by the cynical and ambitious Kate McKay (Meg Ryan), Stuart's ex-girlfriend, who comes to the apartment for her Palm Pilot stylus. He observes that she is a "career woman" and that her field, market research, is a fine avocation for a woman and states that he once dated a librarian from Sussex.

Kate dismisses him and demands that he take Stuart's dog for a walk. Leopold is overwhelmed to see that Roebling's bridge is still standing. Back at the apartment, he befriends Charlie (Breckin Meyer), Kate's brother and an actor between gigs, who believes him to be an actor as well, steadfast to his character.

Kate and Leopold become romantically involved, as they dine and tour New York.
When shooting begins on the commercial in which Leopold has agreed to act, he finds the product, diet margarine, disgusting. He cannot understand how Kate would have him endorse a flawed item without qualms, and declares that "when one finds oneself participating in an endeavor entirely without merit, one withdraws.

Echoing his uncle, Kate says that sometimes one has to do things one doesn't want to. He chides her about integrity. She retorts, 'I don't have time for pious speeches from two hundred year old men who have not worked a day in their life'. Their dalliance seems at an end.

Stuart escapes from the mental hospital, and sends Leopold back to his own time. That night, while Kate is accepting her promotion at a company banquet, he and Charlie are racing to meet her. Moments before she goes on stage, they arrive and produce pictures from Stuart's camera that show her in 1876. Stuart says that he had thought he disrupted the spacetime continuum, but actually 'the whole thing is a beautiful 4-D pretzel of kismetic inevitability'.

Kate chooses a life with Leopold over her career, and the three of them escape to the Brooklyn Bridge. There, catching the portal before it closes at midnight, Kate vanishes into 1876, where Leopold appears resigned to be pragmatic, as Kate and his uncle had advised him, and marry Miss Tree for her family fortune; but, just as he is about to announce his intention to become engaged to Miss Tree, as he opens his mouth to speak, he sees Kate and announces her name, Kate McKay, as his bride-to-be.

In the closing scene, they kiss and the camera is drawn outward showing a grandfather's clock depicting 12:15.

Tagline: If they lived in the same century they'd be perfect for each other.

Based on 0 rating
0 user 0 critic
Did you know? When Leopold is chasing Stuart down the stairs and out of his house, Stuart seems to jump a few metres in a second. In the Director's Cut version, the two guys actually bump into Kate there. Read More
0 User Reviews
No reviews available. Click here to add a review.
Cast

Factual Mistake
The gray silk dress Kate wears at Madison Ave house is plain during the business dinner, but when she goes back in time the dress neckline is decorated with ruffle chiffon.

Factual Mistake
In the extra features of the film, it was explained by the costume designer that the differences in Kate's dress between the dinner and her time travel were intentional differences.

Revealing Mistakes
When Charlie follows Kate to secretly give her the apology letter from Leopold, you can see Kate try to open her brief case a little so Charlie can slip the letter in.

Revealing Mistakes
In the final act, Darci walks up to an elevator, goes to push the button and misses it by about six inches. The elevator arrives anyway.

Miscellaneous
When Leopold wakes up in Stuart's apartment, he says Stuart "could be Jack the Ripper for all I know." Jack the Ripper's crime spree began in the late 1880s.

Character Error
When Kate, Leopold and others go walking outside, they wear jackets or coats; a sign that the movie is set in colder months. When Kate goes to the rooftop dinner, with Leopold she wears a sleeveless summer dress, without a coat. Considering the other scenes, it would probably be colder at night than the daytime, when she was wearing a coat.

Character Error
When in 1876, Leopold is addressed both as "Your Highness" and "Your Grace." However, the former is only used to address Dukes who are also members of the Royal family, in which case the latter is never used and would be considered offensive. If Leopold is not a member of the Royal family, then he should only be addressed as "Your Grace," and using the style "Your Highness" would be incorrect and offensive to the royal family. However, because his dance partner, who is an American, would not realize the offense and uses Your Highness. Thus the forced smile from Leopold and the stoic expression from Otis. Leopold's surname is "Mountbatten" suggesting that he is of the House of Mountbatten (formerly the House of Battenberg until world war I) which was a morganatic branch of royalty that was not capable of inheriting titles such as a dukedom.

Character Error
Leopold gives Charlie a piece of paper saying the number on it will "ring" Patrice. While it's proper for a British person to use the word ring in relation to a phone call, Leopold would have never heard the term used that way, given the time he came from.

Continuity
At the beginning of the film, when Stuart and Kate are talking on the phone, the clock behind them jumps back five minutes.

Continuity
During the rooftop dinner, the strap of Kate's dress alternates between on her shoulder and off her shoulder between shots.

Continuity
When Leopold tells a story to the boy in the apartment, the remote he put in his pants like a sword, flips from front to back after Charlie enters.

Continuity
After Kate and Leopold sit outside, watching the old man switch off the lights at midnight, Kate complains about the day being a Sunday, turns towards him, and puts her arm around Leopold. In the next shot, she turns to his side again.
Trivia:
Hugh Jackman and Liev Schreiber would later co-star as mortal enemies Wolverine and Sabretooth in X-Men Origins: Wolverine (2009).

Hugh Jackman took etiquette lessons from 19-century etiquette expert Jane Gibson (who trained actors for such projects as Sense and Sensibility (1995)). He also studied ballroom dancing and trained to ride a horse for the film.

When Meg Ryan knew that Hugh Jackman was going to spend his wedding anniversary alone, she phoned his wife to invite her to dinner. Reportedly, Jackman had to spend the day working.

When Leopold is chasing Stuart down the stairs and out of his house, Stuart seems to jump a few metres in a second. In the Director's Cut version, the two guys actually bump into Kate there.

According to the DVD commentary, several of the film's actual crew members appear in the crew of the margarine commercial.

The violin piece being performed during Kate and Leopold's rooftop dinner is Jascha Heifetz's transcription of Leopold Godowsky's "Alt-Wien", or "Old Vienna". Godowsky subtitled his work, originally written for solo piano, "Whose yesterdays look backward with a smile through tears"

Sandra Bullock was originally in contention for the part of Kate.

This was the first of two films in which Hugh Jackman (Prince Leopold, Duke of Albany) plays a time traveller. The second is X-Men: Days of Future Past (2014).

When Leopold wakes up in Stuart's apartment for the first time, he accidentally turns on the TV and an episode of The Prisoner (1967) is on.

In the movie, Kate's boss tries to impress her with his knowledge about La Bohème, but Leopold corrects the boss' mistakes about the opera. For instance, Leopold informs Kate that the name of the male lead is Rodolfo, not Andrè, and that the opera is sung in Italian, not French, although it is set in Paris. The point is that Leopold's travel to the future occurs in 1876, while the world premiere performance of La Bohème was in Turin on 1 February 1896. Another point is that the Brooklyn bridge was inaugurated in 1883, not in 1876.

Albany, New York was named after the then Duke of Albany in 1664.

In the film's original edit, Stuart was Leopold's descendant, which was Stuart's reason for specifically tracking him down. Criticism that this plot line also meant that Kate was Stuart's ancestor lead to those scenes being cut. In the Director's Cut version, however, this plot line is followed.

In an early version of the screenplay, Leopold is accidentally transported through time in an actual time machine developed by a group of scientists that includes Kate. They have a child (of whom Leopold is unaware) and eventually reunite during the Roaring '20s. 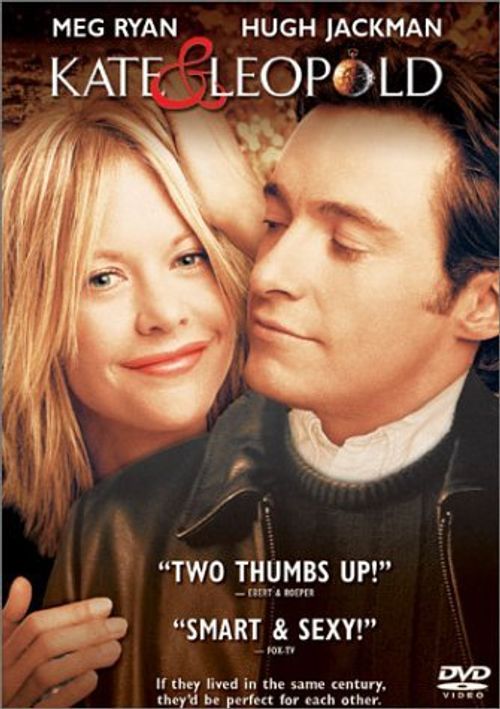