Cancel
Set against the backdrop of bustling Boston in the fall of 2008, while the banking crisis grips national news, this mob thriller depicts the difficult circumstances that emerge when three amateur criminals hold up a high-stakes poker game. When they rob all the cash from all the players, confidence in illegal card games around the area drops, causing frustration and embarrassment for the local mob, who organised it. Consequently, the local mobsters hire Jackie (Brad Pitt), a professional contract killer to identify and eliminate the culprits as an example of the kind of punishment that would be meted out against anyone who dared to wrong the mafia. Will Jackie succeed in fulfilling his assignment?
See Storyline (May Contain Spoilers)

This action oriented thriller sparks off when three amateur criminals hold up a card game and steal cash from all the players. Their heist destroys confidence and all illegal card games in the area stop. Eager to get business and cash moving again, the local mob hire hitman Jackie (Brad Pitt) to find out who knocked off the game and punish them in an effort to restore confidence.

Jackie struggles to get clear direction from the mob that appears to be run as an autonomous collective, leaderless committee. He presses them to allow him to hit Markie Trattman (Ray Liotta) because whilst innocent Markie is the person everybody thinks held up the card game. Jackie's assertion is that if people believe the issue is resolved confidence will be restored; even if the situation remains unchanged.

Markie having been brutally despatched, Jackie is sent to perform a hit on the original three criminals actually responsible. The film is interspersed with talking head news footage of Bush and Obama referring to the struggling economy and the need for America to pull together as a community, the relevance of which becomes clear in the closing scene.

Having eliminated all his targets, Jackie meets with his operator to collect the cash only to be informed that his payment has gone down. The meeting takes place in a bar in which the TV is showing President Barack Obama's inaugural address. Handing over the smaller than agreed sum of money, the Driver says, These are recession prices.

Jackie turns to the TV on which Obama is still addressing the Nation and replies, This guy wants to tell me we're living in a community? Don't make me laugh. I'm living in America, and in America you're on your own. America's not a country. It's just a business. Now fuckin' pay me.

Tagline: In America you're on your own

Based on 0 rating
0 user 0 critic
Did you know? The Turkish former minister of culture found the movie so offensive that he told the press that he wanted the age bar for this movie to be raised from 13 to 18 or, if possible, remove it from the theaters altogether. Read More
0 User Reviews
No reviews available. Click here to add a review.
Cast

Driver
Dawn Cook
Technical Details
Film Type:
Feature
Language:
English
Colour Info:
Color
Frame Rate:
24 fps
Aspect Ratio:
2.35:1
Stereoscopy:
No
Fun Stuff
Taglines:
In America you're on your own
Goofs:
Revealing Mistakes
The sawn-off shotgun Russell has in the robbery scene would fail to work correctly, as there is no barrel. If fired there would be no compression leading to the powder charge not burning correctly. It wouldn't be effective as a weapon.

Revealing Mistakes
When Jackie shoots Trrattman with a pistol through the car window, the ejected shell casing from the pistol is clearly that of a blank, as can be seen by the crimped end of the cartridge casing.

Miscellaneous
When John Amato drives up to the lady's apartment to drop her off, he gets out on the right hand side of the Cadillac. When he returns to the car to drive away, he gets in on the left hand side where he is shot by Jackie.

Continuity
After using his shotgun and putting it in the getaway car, Jackie wipes down the car of evidence but fails to retrieve his gun and his fingerprints on it.

Continuity
When Trattman's car is hit by the tow truck, a close-up shows his head hitting and cracking the windshield. The next exterior shot shows an intact windshield.

Continuity
Just before his beat-down in the rain by Steve and Barry, Markie is sitting in the back seat of the car, completely dry. In the very next scene, having just stepped out of the car, his hair is plastered to his head and his shirt is soaking wet.

Character Error
At one point in the movie Frankie mentions a bar in Haverhill. He pronounces it "haver-hill" but anyone living in new England know it is pronounced "have-rill".

Miscellaneous
This movie is set in 2008, as evidenced by political ads, but a late model (2009 or later) white Mazda sedan can be seen on the street in one of the scenes.
Trivia:
This movie created history by becoming the first feature film to use Kodak's 500T 5230 film stock.

Before the casting for the movie was finalised, Mark Ruffalo, Sam Rockwell and Javier Bardem were considered for various roles.

At one point, Zoe Saldana was considered for a role in this movie.

The title that was originally chosen for this movie is 'Cogans Way'.

This movie has the ignominious distinction of being just one of three films that received an "F" CinemaScore from audiences upon their release in 2012, along with The Devil Inside (2012) and Silent House (2011).

Even though the movie is called 'Killing Them Softly' because Brad Pitt's character likes to kill people from afar, but the 2 people he kills, he kills them up close.

The Turkish former minister of culture found the movie so offensive that he told the press that he wanted the age bar for this movie to be raised from 13 to 18 or, if possible, remove it from the theaters altogether.

In early negotiations, Ray Liotta was the original choice to play Tony Soprano in the HBO show, The Sopranos. The part was later cast to James Gandolfini. Although they share no screen time, they both star in this film. 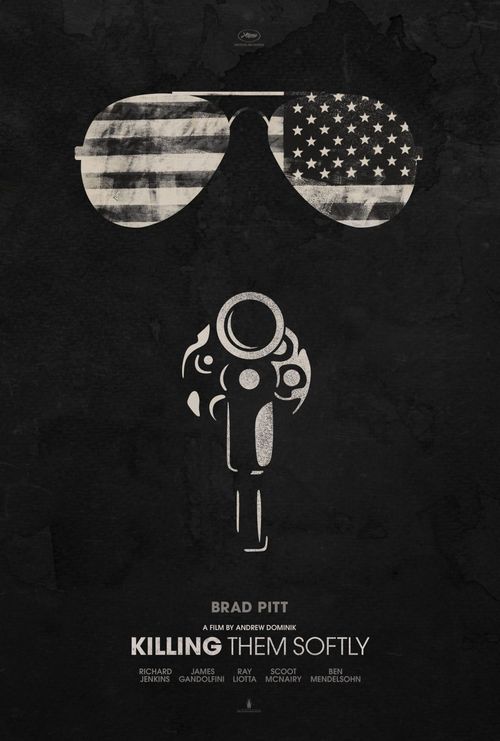 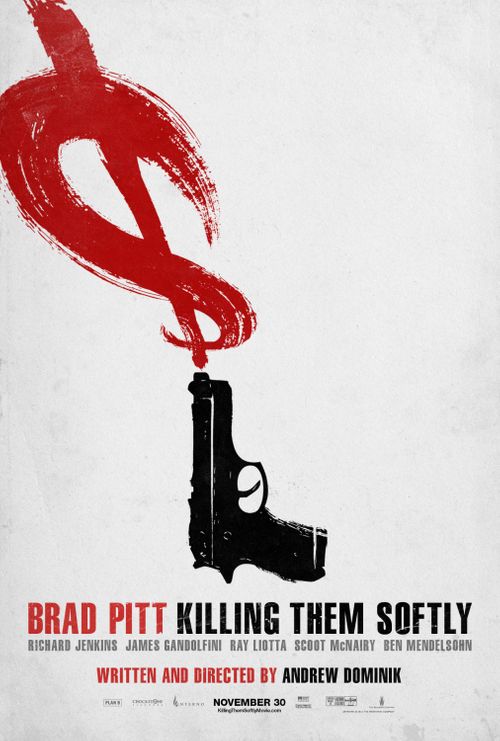