Cancel
Fletcher Reede, a fast talking attorney, habitual liar, and divorced father is an incredibly successful lawyer who has built his career by lying. He has a habit of giving precedence to his job and always breaking promises to be with his favorite young son Max, but Fletcher lets Max down once too often, for missing his own son's birthday party. But until then at 8:15 Max has decided to make an honest man out of him as he wishes for one whole day his dad couldn't tell a lie. When the wish comes true all Fletcher can do is tell the truth and cannot tell one lie. Uh-oh for Fletcher!
See Storyline (May Contain Spoilers)

In Los Angeles, California Fletcher Reede (Jim Carrey) is a career-focused lawyer and divorced father. He loves spending time with his young son Max (Justin Cooper); they often play a game where Fletcher makes his hand into "the Claw" and pretends to chase Max with it. But Fletcher has a habit of giving precedence to his job, breaking promises to Max and his ex-wife Audrey (Maura Tierney), and then lying about the reasons. Fletcher's compulsive lying has also built him a reputation as one of the best defense lawyers in the state of California as he is climbing the ladder in the firm for which he works. Ultimately, Fletcher misses his son's fifth birthday party because he is having sex with his boss Miranda (Amanda Donohoe). Max makes a birthday wish that his father would be unable to tell a lie for an entire day; a wish that immediately becomes true.

Fletcher soon discovers, through a series of embarrassing incidents, such as when he tells Miranda that he has "had better" sex than he just did with her, that he is unable to lie, mislead, or even withhold a true answer. These incidents are inconvenient, as he is fighting a divorce case in court which, should he win, could be a huge boost to his career. His client is Samantha Cole (Jennifer Tilly). His main witness is willing to commit perjury to win, but Fletcher discovers that he cannot even ask a question if he knows the answer will be a lie; during the case he even objects to himself when he tries to lie to get the desired information. Meanwhile, Audrey is planning to move to Boston with her new boyfriend Jerry (Cary Elwes), and decides that Max is going with them so that she can protect him from getting hurt by Fletcher.

Fletcher tries desperately to delay the case, even beating himself up, but he cannot conceal that he is able to continue, so Judge Marshall Stevens (Jason Bernard) insists that he does. Finally he realizes that his client had lied about her age and therefore had signed her prenuptial agreement while a minor, rendering it invalid. This allows him to win his case truthfully, but the repercussions become a catalyst to his understanding of what he himself is about to lose. Samantha, who only cared about her ex-husband's money, takes custody of her children purely so her ex-husband would be forced to continue paying her for child care and literally snatches the children out of the arms of their good and caring father. Fletcher then has a crisis of conscience and shouts at the judge to reverse the decision, and is taken to jail for contempt of court. Audrey refuses to pay his bail, which is eventually paid by his secretary Greta (Anne Haney), who forgives him for his earlier rude truth-tellings after hearing he "went all noble" in front of their firm's senior partner.

Fletcher is fired from the firm but apparently he does not care and is now considering starting his own. And now recognizing his son Max as his highest priority, Fletcher struggles to keep him. He hurries to the airport, but Audrey and Max's plane has already left the terminal. Desperate, he hijacks a mobile stairway and pursues the plane onto the runway. The plane finally stops, but Fletcher is injured. On his way to the hospital, he vows to his son to spend more time with him and never hurt him again. Even though the 24 hours of truth are up, Max knows he means it, and Audrey decides not to move to Boston with Jerry.

Based on 0 rating
0 user 0 critic
Did you know? Jim Carrey declined the role of Dr Evil in Austin Powers: International Man of Mystery (1997) so he could be committed only to this film. Read More
0 User Reviews
No reviews available. Click here to add a review.
Cast

Eric Sharp
as Sharpo the Clown

Revealing Mistakes
The toilet noticeably flexes seen when Fletcher smashes his head between it and the seat.

Audio/Video Mismatch
In the scene where Fletcher gets his car towed and arrives at his wife's house in a taxi, he throws cash at the driver from the back seat. The sound does not match the throwing of the cash.

Continuity
In the scene where right before he gets pulled over by the police, Fletcher passes the same maroon Ford Taurus twice.

Continuity
In the scene where Audrey is about to put candles on Max's Birthday cake, she takes the candles out of the box and puts them on the counter. In the next shot they're in the cake.

Continuity
In the courtroom scene, Fletcher drinks 5 glasses of water. But the amount of water in the pitcher stays the same.

Continuity
In the scene where Fletcher goes to the bathroom to beat himself up, he is clearly wearing a different suit than in the courtroom.

Continuity
In the scene where Audrey tells Jerry about "the Claw", she's holding her right arm when seen from behind, but her left arm (almost at the wrist) when seen from the front.
Trivia:
Jim Carrey declined the role of Dr Evil in Austin Powers: International Man of Mystery (1997) so he could be committed only to this film.

In an interview with Jim Carrey, he says that the gag of Fletcher chasing his son as "The Claw" was something Carrey's father did to him and his siblings.

Steve Martin turned down the lead role in this film as he had scheduling conflicts with another film.

Liar Liar is dedicated to Jason Bernard who played his last role in this film and shortly after died of a heart attack. 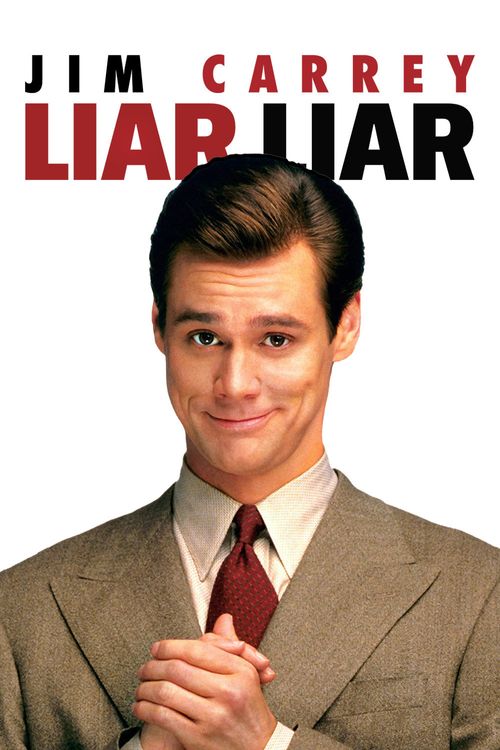 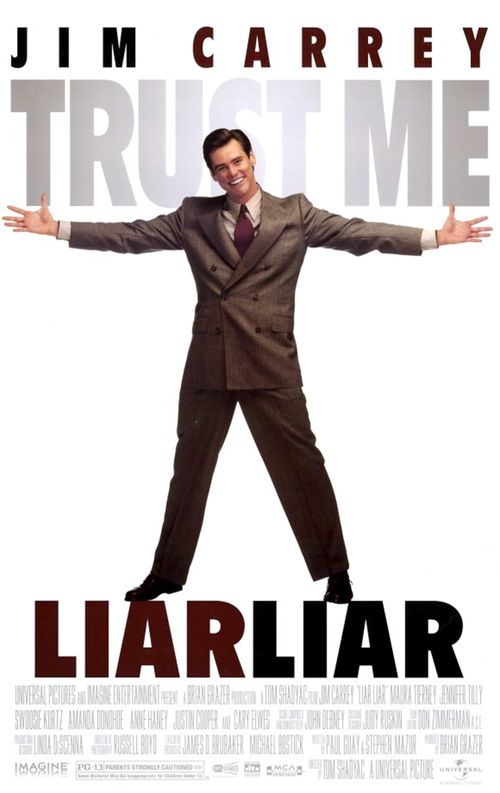