Cancel
24 hours in L.A.; it's raining cats and dogs. Two parallel and intercut stories dramatize men about to die: both are estranged from a grown child, both want to make contact, and neither child wants anything to do with dad. Earl Partridge's son is a charismatic misogynist; Jimmy Gator's daughter is a cokehead and waif. A mild and caring nurse intercedes for Earl, reaching the son; a prayerful and upright beat cop meets the daughter, is attracted to her, and leads her toward a new calm. Meanwhile, guilt consumes Earl's young wife, while two whiz kids, one grown and a loser and the other young and pressured, face their situations. The weather, too, is quirky.
See Storyline (May Contain Spoilers)

The narrator recounts three instances of incredible coincidences and suggests that forces greater than chance play important roles in life.

Police officer Jim Kurring (John C. Reilly) is sent to investigate a disturbance at a woman's apartment and finds a body in her bedroom closet. Dixon (Emmanuel L. Johnson), a neighborhood boy tries to tell him (by rapping) who committed the murder but Jim is dismissive. From there Jim goes to the apartment of Claudia Wilson (Melora Walters). Claudia's neighbors had called the police after she had a loud argument with her estranged father, children's game show host Jimmy Gator (Philip Baker Hall), and then blasted music while snorting cocaine. Unaware of her addiction, Jim is immediately attracted to her and prolongs the visit. He asks her on a date that night; she says yes.

Jimmy hosts a long-running quiz show called "What Do Kids Know?" and is dying of cancer; he has only a few months to live. That night the newest child prodigy on "What Do Kids Know?", Stanley Spector, takes the lead as the show begins. He is hounded by his father for the prize money and demeaned by the surrounding adults, who refuse to let him use the bathroom during a commercial break. When the show resumes, he wets himself and freezes, humiliated when everyone realizes what happened. As the show continues an inebriated Jimmy sickens, and he orders the show to go on after he collapses onstage. But after Stanley's father berates him for freezing on air, Stanley refuses to return for the final round.

Donnie Smith (William H. Macy), a former "What Do Kids Know?" champion, watches the show from a bar. Donnie's parents spent all of the money he won as a child, and he has just been fired from his job at Solomon & Solomon, an electronics store, due to chronic lateness and poor sales. But he is obsessed with getting oral surgery, thinking he will land the man of his dreams after he gets braces. He hatches a plan to get back at his boss by breaking in and stealing the money he needs for his braces.

Like Jimmy, the show's former producer, Earl Partridge (Jason Robards), is dying of cancer. Earl's trophy wife, Linda (Julianne Moore), collects his prescriptions for morphine while he is cared for by a nurse, Phil Parma (Philip Seymour Hoffman). Earl asks Phil to find his estranged son, Frank Mackey (Tom Cruise), a narcissistic misogynist who is peddling a pick-up artist self-help course to men. Frank is in the midst of an interview with a female journalist who reveals that she has information demonstrating his official biography is a lie; rather than being an intelligent free-spirited youth who learned the truth about sexual relationships, Frank as a teenaged boy had been forced to take care of his dying mother when Earl abandoned them. An angry Frank storms out of the interview when Phil finally gets through to him.

Linda goes to see Earl's lawyer, begging him to change Earl's will. She admits she married Earl for his money, but now loves him and doesn't want it. The lawyer suggests she renounce the will and refuse the money, which would then go to Frank. Linda rejects his advice and leaves in a rage. When she gets home Linda berates Phil for seeking out Frank, but later apologizes. She then drives to a vacant parking lot and washes down handfuls of prescription medicine with alcohol. Dixon finds Linda in her car, near death, and calls an ambulance after taking money from her purse.

Before his date with Claudia, Jim takes fire during a pursuit and loses his gun. When he meets Claudia they promise to be honest with each other, so he confesses his ineptitude as a cop and admits he has not been on a date since he was divorced three years earlier. Claudia says he will hate her because of her problems, but Jim assures her they don't matter. They kiss, but she runs off.

Jimmy Gator goes home to his wife Rose and confesses that he has cheated on her. She asks why Claudia does not talk to him, and Jimmy admits that Claudia believes he molested her. But when he says he cannot remember whether or not he did, Rose tells Jimmy he deserves to die alone, and she walks out on him. Jimmy decides to kill himself.

Meanwhile Donnie takes the money from the Solomon & Solomon safe. As he drives away with the money, he panics and decides to return the money. However, he can't get back in—his key had broken off in the lock earlier. As he tries to climb a utility pole to get on the roof, he is seen by a passing Jim. Suddenly, frogs begin to fall from the sky. As Jimmy is about to shoot himself, frogs fall through his skylight, causing him to shoot the TV instead. Rose crashes her car in front of Claudia's apartment but makes it inside safely. Earl dies as Frank watches. Linda's ambulance crashes in front of the emergency room. Donnie is knocked from the pole and smashes his teeth.

The next morning, Jim counsels Donnie and helps him return the money; his gun falls from the sky. Frank goes to the hospital to be with Linda, who will recover from her overdose. Stanley, on his way to bed, tells his father that he needs to be nicer to him. Jim goes to see Claudia, telling her he wants to make things work between them; she smiles in reply.

Tagline: Things fall down. People look up. And when it rains, it pours.

Based on 0 rating
0 user 0 critic
Did you know? The story about the man being killed by a gunshot while falling off a building has for years been used as a hypothetical case in criminal law classes to illustrate causation. Read More
0 User Reviews
No reviews available. Click here to add a review.
Cast

Continuity
Two lights on the back of the ambulance are on and off in consecutive shots.

Crew/Equipment Visible
Shadow moving on the wall behind Frank Mackey as he sits down beside Earl's deathbed.
Trivia:
Almost every location contains at least one picture or painting of a magnolia flower.

Paul Thomas Anderson wrote the bulk of the script during two weeks he spent at William H. Macy's Vermont cabin - afraid to go outside because he'd seen a snake.

The telephone number 'TAME-HER' is shown on the "Seduce and Destroy" infomercials within the movie. Dialing this number used to give a recording of Tom Cruise giving the Seduce and Destroy pitch.

Claudia was the first character created, and the other characters were branched off from her.

The story about the man being killed by a gunshot while falling off a building has for years been used as a hypothetical case in criminal law classes to illustrate causation.

Paul Thomas Anderson wanted to cast Burt Reynolds for an unspecified role. But Reynolds became angry with Anderson during the promotional tour for Boogie Nights (1997) and turned the role down.

Musician Fiona Apple is responsible for many of the paintings seen throughout.

Paul Thomas Anderson made a visit to the set of Eyes Wide Shut, where he offered the role of Frank T.J. Mackey to Tom Cruise.

Fiona Apple is also uncredited as the voice of the wrong number that Phil Parma calls in an attempt to find Frank T.J. Mackey. 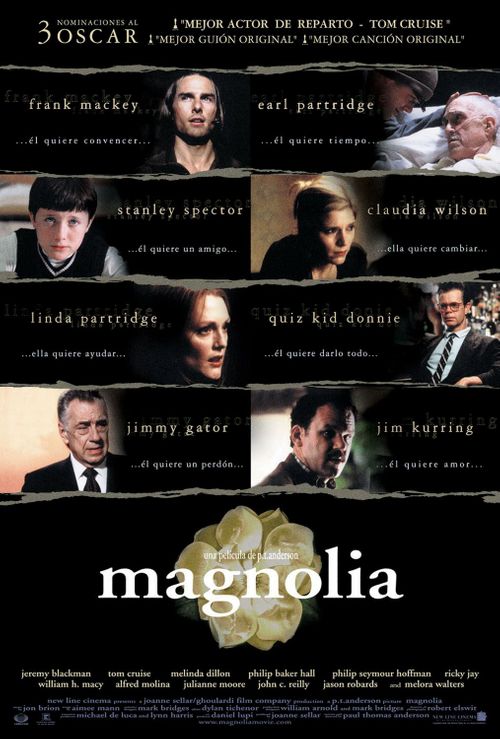 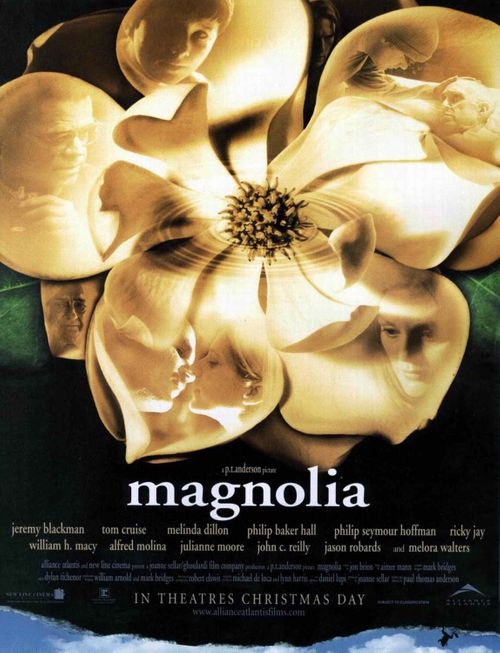