Cancel
After his suspension, police officer, Vinayak along with his four gang members steal crores of rupees. However, he faces trouble when two of his associates betray him. What will the future hold in store for Vinayak and his gang members?
See Storyline (May Contain Spoilers)

Fast-paced and fiery, this suspenseful crime thriller revolves around Vinayak Mahadev (Ajith Kumar), an assistant commissioner of Maharashtra Police, who is suspended for having saved smuggler Faizal (Aravind Akash) from an encounter killing and for helping him escape. Meanwhile, a police officer commits suicide because of the leakage of his IPL gambling plans who is revealed to be Kamal Ekambaram (Subbu Panchu).

Police officer Prithvi (Arjun Sarja) takes charge to end the betting scandals in IPL cricket in Mumbai. It is then revealed by Prithvi that Kamal faked his death in a secret mission to draw attention to the betting scandals and returns under the name Praveen Kumar. Arumuga Chettiar (Jayaprakash), an influential local illegal business dealer and the head of Faizal, owns 'Golden Theatres' in Mumbai, which has been converted into a gambling den and forms the front for all his illegal businesses.

Arumuga Chettiyar uses his links with dons in Mumbai and tries to route through his old theatre, a cash of over 5 billion (US$ 74 million) to be used in betting. Vinayak is introduced to Arumuga Chettiyar through his girlfriend Sanjana (Trisha). Sanjana is in love with Vinayak, but Vinayak just pretends to love her.

Sumanth (Vaibhav Reddy), a goon working for Arumuga Chettiyar, hatches a conspiracy to rob the money in the company of his friends – Ganesh (Ashwin Kakumanu), a local sub-Inspector, Mahat (Mahat Raghavendra), who owns a bar in Mumbai and Mahat's friend Prem (Premji Amaren), an IIT graduate. Vinayak befriends the boys at Sumanth's marriage with Suchithra (Anjali).

Late one evening, Vinayak meets Prem, who becomes inebriated by him and reveals their heist plan. Vinayak starts spying on them and confronts them on the day of the planned heist, stepping in. The four, reluctantly take him in, promising him a fifth of the share. Vinayak, however, has other plans. He wants to kill his four accomplices and take the entire amount. He promises to help them and divide it between them.

After looting the money they leave the money in an abandoned godown. Later, all of them celebrate the turn of events at Mahat's bar. But Sumanth is identified at the party by Faizal and is later caught by him. Sumanth is cornered by Chettiar, who orders Faizal to kill him for his treachery but is rescued in time by Ganesh and Vinayak, and the trio escape from the hide-out taking Chettiar as hostage.

While driving back to the warehouse, Vinayak finds Sanjana on the way and in front of her, he brutally shoves Chettiar out of the vehicle. Sanjana engulfs in grief when she comes to know about Vinayak's true intentions.

Meanwhile, upon reaching the godown, they discover that Mahat and Prem had escaped with the cash and are accompanied by Sona (Lakshmi Rai). The three are then confronted by Faizal and Chettiar's men but manage to evade them and get on the run. Sumanth later turns against Vinayak when he comes to know that his wife had been kidnapped by Chettiar.

After a brief scuffle, Sumanth runs into Prithvi who takes him to custody and rescues his wife on the condition that he turns approver and divulge everything. He is however killed when Prithvi's wife Sabitha Prithviraj (Andrea Jeremiah) is kidnapped and threatened by Vinayak.

Vinayak comes to know of the whereabouts of Mahat and Prem through Ganesh and along with him, starts pursuing them. Prithvi and the others also follow suit and all of them are holed up in a highway resort with the money.

A sequence of events lead to the murders of the gang members one by one — Mahat is killed by Sona who betrays him, Prem is killed by Prithvi who he mistakenly assumes was about to kill him, and Sona is killed by Vinayak — with Ganesh and Vinayak remaining alive. A final fight ensues between Vinayak and Prithvi. The two actually prove to be equal. At the final moment of the fight, Kamal throws a gun to Prithvi who shoots Vinayak, and a huge explosion rocks the shack seemingly ending the fight.

After several days, the police gets information about Ganesh to be living in Thailand. Kamal (under the name of Praveen Kumar) arrives there, but instead comes across Vinayak. Kamal confronts him and calls up Prithvi to inform him of Vinayak's presence, but then it is then revealed that Prithviraj and Vinayak are actually best friends since their college days and were trained in the same batch at the police academy.

They had come to know about the betting money scheme by Chettiar and operated the plan together (including Vinayak's faked death). Ganesh had also been killed by Vinayak as a part of the plan, and both Prithvi and Vinayak escaped the explosion with the 5 billion (US$ 74 million), each taking 2.5 billion (US$37 million) as their share. Prithvi informs Vinayak that their money was safe in the Bank of England, and asks him to deal with Kamal. Vinayak then snatches Praveen's gun and points it at his forehead, saying, 'game over'!

Based on 18 ratings
0 user 0 critic
Did you know? The director of the movie wanted a chain with a dollar for Ajith to throw it into the fire in the final scene of the movie, but Vasuki Bhaskar, costume designer of the film felt that handcuff dollar would work since it fits his role as a cop off duty. The decision was finalized on the day before the shoot. Read More
0 User Reviews
No reviews available. Click here to add a review.
Cast

The director initially had plans to cast Hindi actor Vivek Oberoi in the lead role.

The director of the movie wanted a chain with a dollar for Ajith to throw it into the fire in the final scene of the movie, but Vasuki Bhaskar, costume designer of the film felt that handcuff dollar would work since it fits his role as a cop off duty. The decision was finalized on the day before the shoot.
Buzz
It is Official - 'Mankatha' is remade in Hindi
05 Mar 2015, by Galatta 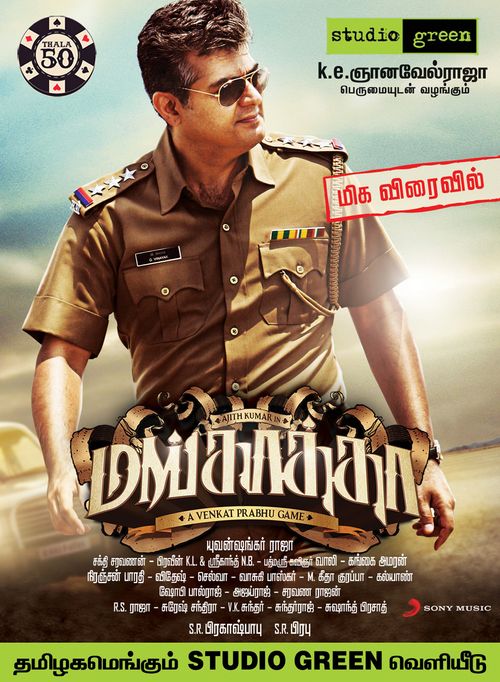 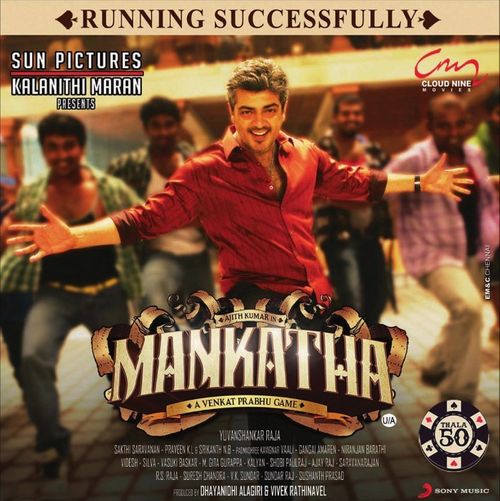 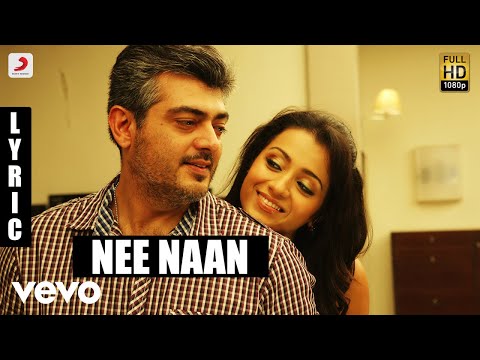 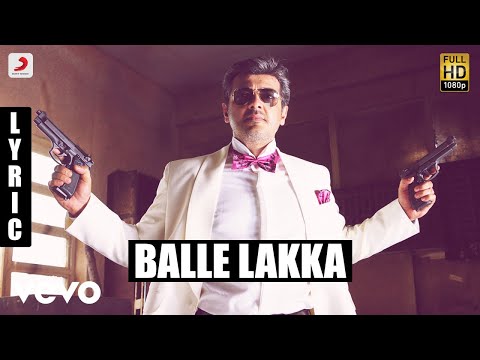 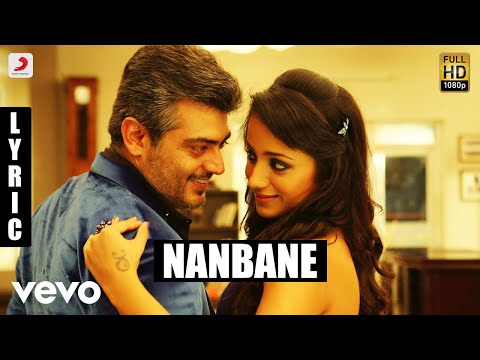 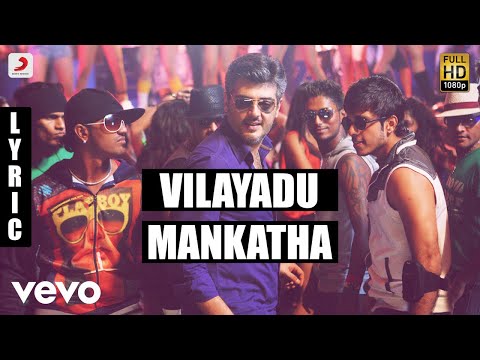 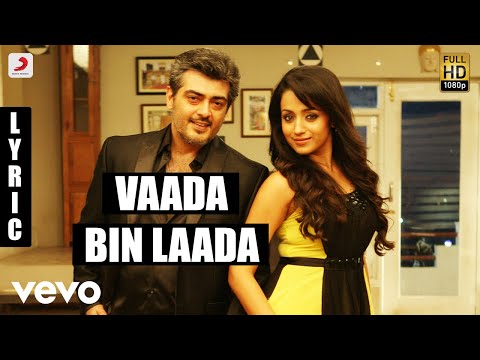 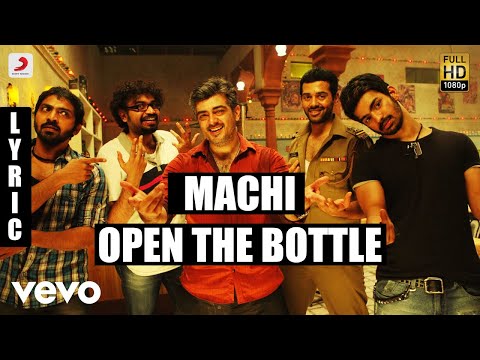