Cancel
In the year 2054 A.D. crime is virtually eliminated from Washington D.C. thanks to an elite law enforcing squad "Precrime". They use three gifted humans (called "Pre-Cogs") with special powers to see into the future and predict crimes beforehand. John Anderton heads Precrime and believes the system's flawlessness steadfastly. However one day the Pre-Cogs predict that Anderton will commit a murder himself in the next 36 hours. Worse, Anderton doesn't even know the victim. He decides to get to the mystery's core by finding out the 'minority report' which means the prediction of the female Pre-Cog Agatha that "might" tell a different story and prove Anderton innocent.
See Storyline (May Contain Spoilers)

In Washington, D.C., in the year 2054, murder has been eliminated. The future is seen and the guilty punished before the crime has ever been committed. From a nexus deep within the Justice Department's elite Pre-Crime unit, all the evidence to convict--from imagery alluding to the time, place and other details--is seen by "Pre-Cogs," three psychic beings whose visions of murders have never been wrong. It is the nation's most advanced crime force, a perfect system. And no one works harder for Pre-Crime than its top man, Chief John Anderton. Destroyed by a tragic loss, Anderton has thrown all of his passion into a system that could potentially spare thousands of people from the tragedy he lived through. Six years later, the coming vote to take it national has only fueled his conviction that Pre-Crime works. Anderton has no reason to doubt it until he becomes its #1 suspect. As the head of the unit, Anderton is the first to see the images as they flow from the liquid suspension chamber where the Pre-Cogs dream of murder. The faces are unknown to him, but this time, the killer's identity is clear when Anderton will murder a total stranger in less than 36 hours. Now with his own unit tracking his every move, led by his rival Danny Witwer, Anderton must go below the radar of the state-of-the-art automated city, where every step you take is monitored. Because people can't hide, everybody runs. With no way to defend himself against the charge of Pre-Crime, John must trace the roots of what brought him here, and uncover the truth behind the questions he has spent the past six years working to eliminate: Is it possible for the Pre-Cogs to be wrong?

Tagline: What would you do if you were accused of a murder, you had not committed... yet?

Based on 0 rating
0 user 0 critic
Did you know? This film is loosely based on the 1956 short story The Minority Report by Philip K. Dick. Read More
0 User Reviews
No reviews available. Click here to add a review.
Cast

Visual Effects Supervisor
Scott Farrar
Technical Details
Film Type:
Feature
Language:
English
Spoken Languages:
Swedish
Colour Info:
Color
Sound Mix:
Dolby Digital, DTS
Frame Rate:
24 fps
Aspect Ratio:
2.39:1 (Scope)
Stereoscopy:
No
Fun Stuff
Taglines:
What would you do if you were accused of a murder, you had not committed... yet?
Everybody Runs
The system is perfect until it comes after you.
The Future Can Be Seen. Murder Can be Prevented. The Guilty Punished Before the Crime is Committed. The System is Perfect. It's Never Wrong. Until It Comes After You.
Get Ready to RUN!
You Can't Hide
Count to 3 and get ready to run...
You can't hide. Get ready to run!
Movie Connection(s):
Referenced in: Star Trek Into Darkness (English)
Referenced in: Elysium (English)
Filming Locations:
Arlington, Virginia
Trivia:
This film is loosely based on the 1956 short story The Minority Report by Philip K. Dick.

For the scene where Anderton holds his breath in the bathtub, director Steven Spielberg was going to create the air bubble rising with CGI, but Tom Cruise took the time and learned how to do it himself. 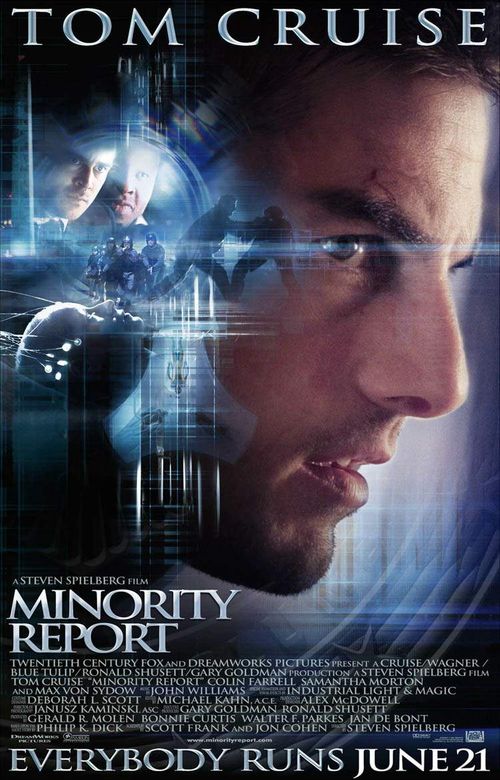