Cancel
Orphaned as a child, Arun Verma has dedicated his adult life to looking after orphaned children, in a house where he is unable to afford to pay the rent nor even day to day expenses for necessities. He decides to rent one of the rooms, and the tenant is a newspaper reporter named Seema Sohni, who happens to dislike children. International crime lord and terrorist Mogambo takes an interest in his very house to store his firearms, and other weapons, and sends his men to force Arun to vacate. Arun and some of the children are beaten-up and threatened with dire consequences if they do not vacate the house. Arun's dad's friend Professor Sinha (Ashok Kumar) shows Arun a device that will make in him invisible, and thereby he will find a way to fight to keep the house. Arun tries the device, and he becomes invisible. Using this, he is able to turn the tables on Mogambo's men, and calls himself "Mr.India". Mr. India becomes popular with the masses, and people everywhere rejoice and claim him to be their new savior. No one knows that Mr. India is Arun, save for Jugal. This does not auger well with Mogambo, and he spreads his terror, killing hundreds of innocent citizens, including a child in Arun's care. Mogambo decides to kidnap the children, Seema, and Arun himself, and hopes to trap Mr. India, when he attempts to rescue them. The abduction takes place, and Arun, Seema, and the children are locked in a cell. In this skirmish, Arun misplaces the device, while Seema and the children await the arrival of Mr. India to rescue them, not knowing that time is running out, and Mogambo has already planned their deaths in a pit full of acid.
See Storyline (May Contain Spoilers)

The film opens with the revelation that violence has escalated in India, in which the central villain is Mogambo (Amrish Puri). Mogambo is a brilliant yet insane General whose goal is to conquer India. From his island, modeled after the island of Dr. No, Mogambo monitors the evil-doings perpetrated by his henchmen. All his subordinates know the formal salute "Hail Mogambo!", emphasizing his complete authority over his minions.

Arun Verma (Anil Kapoor) is an orphan and a street-walking violinist who rents a large, old house. There, he houses a dozen or so orphaned children and takes care of them with the help of his cook and caretaker Calendar (Satish Kaushik). Arun is poor, owes debts to the local food merchant Roopchand (Harish Patel), and is overdue to pay the landlord Maniklal (Yunus Parvez). In spite of these problems, Arun tries to look on the bright side of every situation. As time goes by, Calendar reminds Arun that the cost of running the home continues to rise. Arun decides to rent out the room on the first floor. When he goes to the local newspaper to run an advertisement for the room, he meets Seema Sohni (Sridevi) and makes her his tenant. They get off to a rocky start but Seema eventually becomes friends with everyone.

One day, Arun receives a mysterious letter from a family friend, Dr. Sinha (Ashok Kumar), who reveals that Arun's late father had created a device that would make its user invisible. With the directions in the letter, Arun, accompanied by his ward Jugal, enters his father's laboratory and finds the device. The device is in the shape of a gold watch worn on the wrist. When it is activated, it makes the wearer invisible to the naked eye. This invisibility is pervasive except for one flaw: when red light is focused on the wearer, he becomes visible. Arun and Jugal decide to keep the device a secret between them. Seema goes to a lavish party hosted by Teja and Daaga, where she performs a song under the guise of a Hawaiian dancer. She is nearly killed by the criminals after her disguise is spoiled, but Arun invisibly rescues her, styling himself "Mr. India". Thereafter, Seema falls in love with her rescuer, though not attracted to his civilian alter ego.

Mr. India later defeats Mogambo's men in several encounters, foiling their criminal plans. Mogambo's computer-aided intelligence teams reveal that Mr. India's specific actions against the gambling den bring benefit to Arun Verma. Mogambo has bombs disguised as toys, planted in places where children can find them. One of the bombs kills Arun's youngest and dearest charge, Tina, driving Arun to immense grief. Arun, Seema, Calendar, and the surviving children are brought before Mogambo. Mogambo tortures them so that they reveal Mr. India's true identity and the location of the invisibility device. Arun eventually volunteers to this when Mogambo threatens to drop two children into a pit of acid; but because Arun has dropped the device, he cannot become invisible to prove himself. Frustrated, Mogambo has them sent into the dungeons.

However, they are all able to escape. Mogambo activates four ICBMs, which are poised to destroy all of India. Arun confronts him, and the two fight. When Arun has overcome Mogambo, he deactivates the launch which culminates in the missiles detonating on the launchpad. Arun, Seema, Calendar, and the children escape, while Mogambo's fortress is destroyed. Mogambo himself dies in the fire.

Arun's dual identity remains a secret to most people, while he returns to his former life

Based on 0 rating
0 user 0 critic
Did you know? Amitabh Bachchan was offered the lead role but declined because he was into politics and also couldn't relate to the invisible character. Read More
0 User Reviews
No reviews available. Click here to add a review.
Cast

Satish Kaushik
as Calender the Cook

Amitabh Bachchan was offered the lead role but declined because he was into politics and also couldn't relate to the invisible character.

The film is well known for many of its lines and songs, including Sridevi's "Miss Hawa Hawaii" performance and Amrish Puri's quote "Mogambo khush hua" ("Mogambo is pleased").

In the scene where Prof. Sinha is first talking to his students in the class, on the blackboard behind him are displayed formulae from varied branches of science - mathematics, chemistry etc. Prominently visible is "Boney's Law of Time-Space Continuum". Boney Kapoor is the producer of the movie. 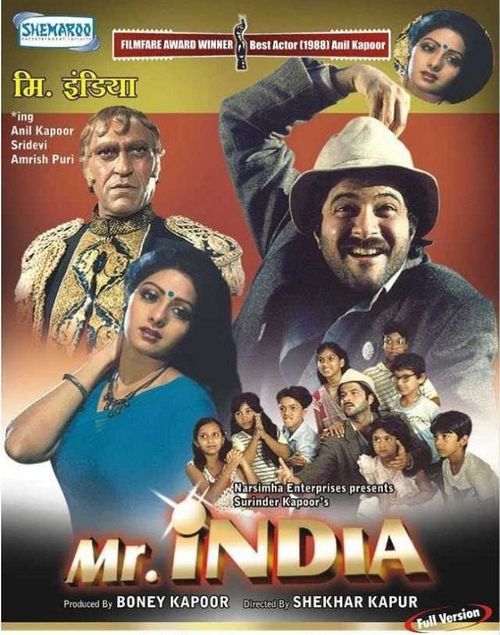