Cancel
Scrawny, sullen and aloof, Napoleon Dynamite is a social misfit, who gets routinely bullied in his high school. Moreover, he has various members of his dysfunctional family to deal with on a continual basis. Then, like a breath of fresh air, Pedro shows up. The new kid in town. He's from Mexico, he has an awesome bike, and he's the only kid in school with a mustache. When Napoleon befriends Pedro, and Pedro decides to run for class president, Napoleon gets his chance to show his stuff and prove that he's got nothing to prove. Will Napoleon succeed in showcasing his talents and become instrumental in Pedro's success?
See Storyline (May Contain Spoilers)

Napoleon Dynamite is a socially awkward high school student from Preston, Idaho who lives with his older brother Kip, their grandmother, and their pet llama, Tina. Kip, 32, is unemployed and boasts of spending hours in Internet chat rooms with "babes" and training to be a cage fighter; their grandmother leads a secret life involving mysterious boyfriends and quad-biking in the desert. Napoleon daydreams his way through school, doodling ligers and fantasy creatures, and reluctantly deals with the various bullies who torment him. Napoleon frequently makes up fantastic stories about himself and assumes a sullen and aloof attitude.

Napoleon's grandmother breaks her coccyx in a quad-bike accident and asks their Uncle Rico to look after the boys while she recovers. Rico, a middle-aged former athlete who lives in a campervan, uses the opportunity to team up with Kip in a get-rich-quick scheme to sell numerous items door-to-door. Kip wants money to visit his Internet girlfriend LaFawnduh, while Rico believes riches will help him get over his failed dreams of NFL stardom and the loss of his girlfriend.

Napoleon becomes friends with two students at his school: Deb, a shy girl who runs various small businesses to raise money for college; and Pedro, a transfer student from Ciudad Juárez. A friendship soon develops between the three outcasts. Inspired by a poster at the school dance, Pedro decides to run for class president, pitting him against Summer Wheatley, a popular and snobby girl at the school.

Rico and Kip's scheme causes friction with Napoleon when Rico begins spreading embarrassing rumors about Napoleon, to evoke sympathy from his prospective customers. Tensions finally come to a head after Rico tries to sell Deb a breast-enhancement product, claiming it was Napoleon's suggestion, which causes her to break off their friendship. Rico is ultimately beaten up by the town's martial arts instructor after the instructor finds Rico in his house, seemingly making advances on his wife. Kip, meanwhile, is head-over-heels in love, because LaFawnduh came to visit him from Detroit. She gives Kip an urban makeover, outfitting him in hip hop regalia, and they leave together on a bus for Michigan.

On the day of the class president elections, Pedro gives an unimpressive speech before the student body. After the principal unexpectedly informed them that Pedro needed to have a skit to accompany his speech, Napoleon gives the sound engineer a music tape he received from LaFawnduh, and performs an elaborate dance routine to "Canned Heat" by Jamiroquai. The routine receives a standing ovation from everyone except for Summer and her boyfriend.

The film concludes with Pedro becoming the class president, Rico reuniting with his estranged girlfriend, Grandma returning from the hospital, and Napoleon and Deb making up and playing tetherball.

In a post-credits scene, Kip and LaFawnduh are married in an outdoor ceremony in Preston. Napoleon, absent for the vows, arrives riding a horse, claiming that it is a "wild honeymoon stallion" that he has tamed himself. After Deb photographs Napoleon on the horse, Kip and LaFawnduh ride into the sunset.

Tagline: He's out to prove he's got nothing to prove.

Based on 0 rating
0 user 0 critic
Did you know? This movie features one of the longest credited cast lists in movie history; all 181 student extras' names are listed in the closing credits. Read More
0 User Reviews
No reviews available. Click here to add a review.
Cast

Crew/Equipment Visible
When Uncle Rico pulls up in front of school as Napoleon draws a Liger, a person can be seen running left out of frame. Also, the crew is reflected in the windows.

Crew/Equipment Visible
When Napoleon is watching Lyle shoot the cow and the bus drives in between them, the camera, tripod, and several members of the crew can be seen reflected in the glass on the bus door.

Crew/Equipment Visible
At the dance a boom shadow pointing upwards is visible across the students' faces when the camera pans across room.

Character Error
When Napoleon shows Pedro the picture of the woman that Deb gave him, Pedro says, "I like her bangs." However, the woman in the picture doesn't have bangs.

Revealing Mistakes
At the FFA contest none of the FFA members or judges are wearing their jackets zipped up, FFA rules require jackets to be worn zipped to the top.

Continuity
When Napoleon is waiting in the van for Uncle Rico to take him to the dance, he looks at his watch. The time and date displayed is 5:40 p.m., Thursday 7/17. (They may have forgotten to change the date on the watch -- how many school dances are in July?) After he starts running down the road, he stops to look at his watch and the time and date says 5:54 p.m., Monday, 7/21.

Continuity
When Napoleon asks Pedro for his "tots", the tot by Pedro appears and disappears in between shots.

Continuity
When Naploeon calls home to ask Kip to bring him his Chap Stick, the position of the nacho's, and the amount of cheese on them changes several times.

Audio/Video Mismatch
When Napoleon is calling Pedro after telling Rico to leave, he dials seven numbers, but you only hear the sound for six of them.

Audio/Video Mismatch
In the opening credits, several plates are being set down onto carpet; however, all the sound effects are of plates being set onto a wood table or other hard surface.

Audio/Video Mismatch
When Napoleon is in front of the class doing Sign Language to the song "The Rose", none of the signs match the words being sung except the first line. They are signing lines from later on in the song.
Trivia:
Both Jon Heder (Napoleon) and Efren Ramirez (Pedro), who play the lead characters in the movie, have an identical twin in real life.

Jon Heder really drew all of the "drawings" in the movie except the unicorn.

This movie was filmed entirely in just 22 days.

This movie features one of the longest credited cast lists in movie history; all 181 student extras' names are listed in the closing credits.

Jon Gries (Uncle Rico) is actually a vegetarian; every time he was eating steak and wiped his mouth he was spitting the meat into the napkin.

A "Napoleon Dynamite" festival was held every year from 2004-08 in Preston, Idaho, the city where the movie was filmed. The festival had contests that included a tater-tot eating, football-throwing, look-a-likes and other types of competition based on scenes from the movie.

Jon Heder's big dance scene was the last scene scheduled and film ran out while shooting it. The sequence was edited together from less than 10 minutes of his dancing.

In real life, the llama belongs to director/co-writer Jared Hess's mother, and its name is Dolly.

Despite playing high-school students, Jon Heder and Efren Ramirez were, respectively, 27 and 31 when this movie was made.

Uncle Rico's girlfriend who rides up to him on her bicycle at the end of the film, is Aaron Ruell's wife.

Jon Heder permed his hair for the film.

When Kip is on the computer near the beginning of the film, all of the words he is saying were improvised by Aaron Ruell. If listened to closely, one can hear him singing a little bit right as Grandma comes in.

The scene of the farmer shooting the cow in front of the school bus full of children is a true anecdote from the director's childhood.

The "liger" is a real animal, created when a male lion mates with a female tiger. It does not, however, have "skills in magic", as Napoleon claims.

Aaron Ruell (Kip) had braces put on his teeth for this role (two dentists are thanked in the credits).

The movie was edited in producer Jeremy Coon's apartment using a $6,000 Macintosh with Final Cut Pro.

Idaho unanimously passed a bill praising Jared Hess and Jerusha Hess for making the film, citing amongst their reasons that the Preston High School administration and staff, particularly the cafeteria staff, have enjoyed notoriety and worldwide attention. Tater tots figuring prominently in the film has promoted Idaho's most famous export.

The opening title sequence was partially re shot due to some of the executives at Fox Searchlight not liking the look of the actors hands who place the food into the shot. They flew out a "hand model" to re shoot some of the shots with the director.

In a deleted scene, it is shown that Napoleon gets a scratch ticket and won $10, which originally was shown in Peluca (2003). That was what made it so he could afford the $12 suit for the dance and not even the price was implied in the movie.

The film is based on a short film Jared Hess made in 2002 with Jon Heder. Almost everything from the short made it into the feature film. For instance, there is a scene in the feature film where Napoleon and Pedro are at a state fair appraising cows or tasting milk. In the short, there is only a line of spoken dialog that mentions the taste-testing of milk.

The name "Napoleon Dynamite" is a pseudonym used by Elvis Costello for his 1986 album, "Blood and Chocolate". Executive producer Jeremy Coon has stated that the similarity is a coincidence and that the producers were unaware of Costello's usage of the name until the film was in production.

Deb's photo studio is actually the basement of the interior version of Napoleon Dynamite's house.

Jon Heder credits Tina Majorino (Deb) with helping to choreograph the dance scene. He also states that some of the dance moves were "borrowed" from Michael Jackson, Backstreet Boys, John Travolta, Soul Train (1971), as well as some of his own moves. 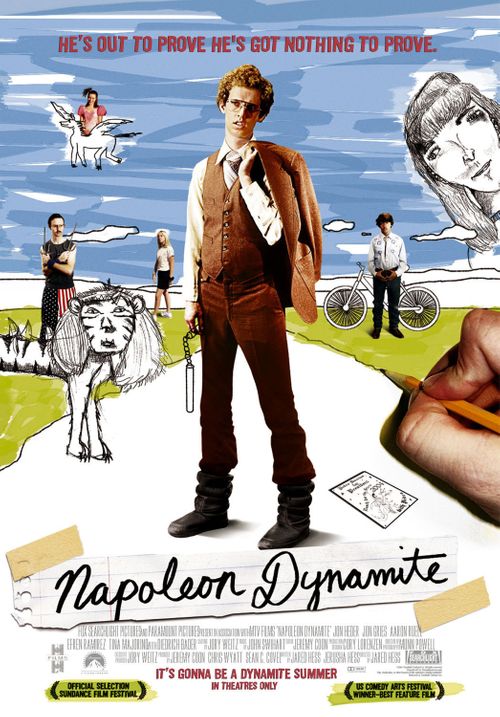 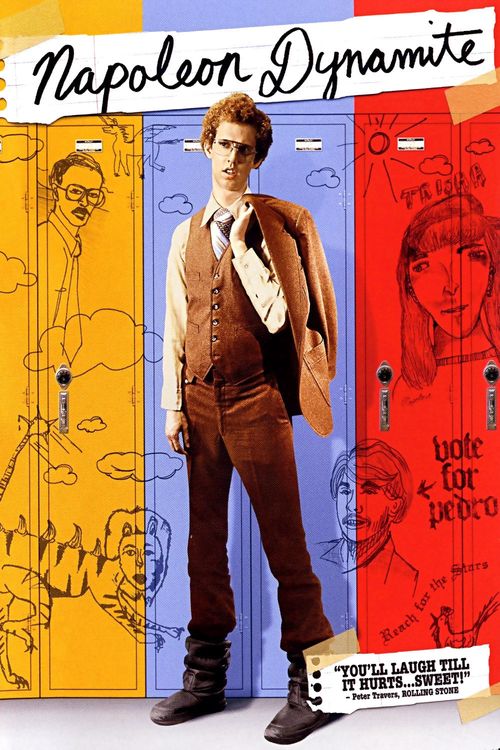