Cancel
In this high-stakes thriller, Adam Cassidy (Liam Hemsworth) is a regular guy trying to get ahead in his entry-level job at Wyatt Corporation. But after one costly mistake, Adam's ruthless CEO, Nicholas Wyatt (Gary Oldman), forces him to spy on corporate rival, Jock Goddard (Harrison Ford), Wyatt's old mentor. Adam soon finds himself occupying the corner office and living the life of his dreams. However, behind the scenes, he is simply a pawn in Wyatt's corporate game and realizes he must ultimately find a way out from under his boss who will stop at nothing, even murder, to win a multi-billion dollar advantage.
See Storyline (May Contain Spoilers)

Adam Cassidy is a low-level inventor who works for a corporation run by Nicholas Wyatt. After being fired for insubordination, Adam uses the company's credit card to pay for bottle service for his friends at a club. Wyatt and his enforcer, Miles Meachum, blackmail Adam into becoming a corporate spy for Wyatt by threatening to have him arrested for fraud.

Adam is trained by Judith Bolton and infiltrates a company run by Wyatt's former mentor, Jock Goddard. He provides Goddard, who stole several of Wyatt's ideas, with an advanced software able to hack into cellphones, with potential military applications. FBI Agent Gamble interrogates Adam, revealing that three other employees of Wyatt who transferred to Goddard's company were found dead, but Adam ignores him.

Adam finds out Emma Jennings, a woman he met during the party, is the Director of Marketing of Goddard's company. He initiates a relationship with Emma in order to steal files about Goddard's upcoming projects. Wyatt threatens to kill Adam's father, Frank Cassidy, if Adam doesn't steal a revolutionary prototype cellphone developed by Goddard. Adam later finds out Meachum and Bolton are monitoring him, so he destroys the cameras in his apartment. In retaliation, Meachum runs over Adam's friend, Kevin, with a car, nearly killing him. Adam is given 48 hours to steal the prototype.

Adam uses Emma's thumbprint lifted from a spoon to gain security access to the company's vault. He is confronted there by Goddard, who intends to take over Wyatt's company with evidence that Adam was acting as Wyatt's spy. Emma finds out Adam used her. Adam recruits Kevin to help him. A meeting is set with Wyatt and Goddard, where it is revealed that Bolton has spied against Wyatt on Goddard's behalf. Both men speak of the crimes they have committed to sabotage each other's companies.

Adam has secretly used software to transmit their conversation to Kevin, whose computer recordings are turned over to the FBI. Goddard, Wyatt, Bolton and Meachum are arrested by Gamble, while Adam is released for contributing to the FBI's investigation. He reconciles with Emma and opens a small startup company in Brooklyn with Kevin and their friends.

Tagline: In a war between kings even a pawn can change the game

Based on 0 rating
0 user 0 critic
Did you know? Kevin Spacey was offered the role of Nicholas Wyatt, but turned it down. Read More
0 User Reviews
No reviews available. Click here to add a review.
Cast

Lucas Till
as Kevin

Harrison Ford and Gary Oldman had previously appeared together in Air Force One (1997).

Kevin Spacey was offered the role of Nicholas Wyatt, but turned it down. 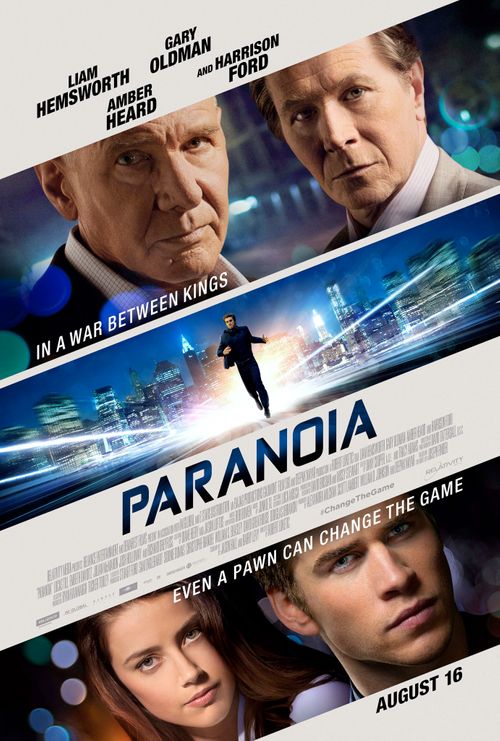