Cancel
Set amidst the unparalleled wealth and glamor of Palm Beach, Florida, the film revolves around professional thief Parker (Statham), who is double-crossed by his crew. He sets out for revenge on them, travelling to Palm Beach, where he enlists the help of Leslie (Lopez), who assists him in a quest to steal what his former crew, headed by a man named Melander (Michael Chiklis), rob in their jewelry auction heist. As the story develops, Leslie falls for Parker, who remains faithful to his girlfriend Claire (Emma Booth).
See Storyline (May Contain Spoilers)

Parker (Jason Statham) is a professional thief, specializing in planning big robberies. His mentor Hurley (Nick Nolte) asks him to do a job with a crew he doesn't know, consisting of Melander (Michael Chiklis), Carlson (Wendell Pierce), Ross (Clifton Collins Jr.), and Hardwicke (Michah Hauptman). The job, taking the gate money from the Ohio State Fair, is successful, but a man is needlessly killed in a fire set as a distraction.

Parker, disgusted with the crew's unprofessional standards, refuses to participate in another robbery that could net them millions. Needing his share of the loot to finance the bigger job, and fearing he might take revenge, the crew decides to shoot Parker and leave him to die alongside a road. Not as badly injured as they believed, he is found by a family of tomato farmers who take him to the hospital, where he subdues a male nurse, steals his uniform, and escapes. He then robs a check-cashing store, shooting one proprietor in the leg and stealing a woman's car.

Parker tells Hurley that he wants to go after the double-crossing Melander, whom he discovers is in Palm Beach, Florida for another heist. On learning that Parker is alive, the crew uses their mob connections to hire a hitman named Kroll (Daniel Bernhardt). He tries to kidnap Parker's girlfriend Claire (Emma Booth). She narrowly escapes and goes into hiding at a Fish Camp. Hurley, who is Claire's father, is worried and suggests Parker run away with her, but he refuses, completely intent on revenge against Melander.

Parker poses in Palm Beach as a rich Texan named Daniel Parmitt, looking for a place to live. Leslie Rodgers (Jennifer Lopez) is a depressed, unsuccessful real-estate agent living with her mother (Patti LuPone), struggling financially after a divorce. She is thrilled when Parker (as Parmitt) appears to become interested in her properties because she is desperate for a commission.

Leslie soon becomes suspicious when Parker shows interest only in a house that a man named Rodrigo recently purchased and is remodelling. In reality, Rodrigo is Melander, staying in the house with the crew in anticipation of a $50 million jewelry auction they plan to rob. Leslie eventually finds out that Parker is using a fake identity. She offers her knowledge of the area in exchange for a commission. He considers it only after making her strip to show she isn't wearing a wire. Together, they plan to steal the jewels from Melander after he robs them from the auction. Leslie makes a pass at Parker, but he remains distant, though obviously attracted to her.

Before the auction, Melander's crew disguise themselves as delivery men. Meanwhile, Kroll learns that Parker is in Palm Beach, and he attempts to kill him. After a brutal and bloody fight, Kroll stabs Parker through the hand, but ends up falling to his death from Parker's hotel balcony. The next morning, Palm Beach Sheriff's Deputy Jake Fernandez (Bobby Cannavale) arrives with questions for Leslie after learning that she was in business with Daniel Parmitt. She is shocked when she discovers a bloody Parker hiding in her house with her mother's permission. At Parker's request, she contacts Claire, who comes to stitch up his wounds. The subsequent encounter makes it clear to Leslie that Claire is the woman in his life.

The crew successfully steals the jewels at the auction. They swim back to the house, where Parker has already arrived. Worried that Parker might need help, Leslie makes her way to the house and begins snooping around the garden. She is found and taken inside, where the crew abuse and question her, assuming she and Parker are working together. Parker kills Ross when he goes outside by stabbing him in the neck; others begin to panic.

Melander finds Parker and a fight ensues. Carlson starts to molest Leslie, but she shoots him multiple times with a gun she noticed under the table that Parker had planted. Parker, in spite of his wounds, is able to kill Melander. All members of the crew end up dead. Parker and Leslie arrange for the jewels to be hidden and for her to receive her cut. She tells him she knows now she never had a chance to be with him, and they part ways—Parker showing some regret as she leaves.

Six months later, Parker goes to Chicago and kills the syndicate boss who hired Kroll to kill him. A year later, Leslie receives two hefty boxes in the mail containing several million dollars. In the final scene before the credits, the tomato farmers who saved Parker's life are talking to somebody about how they got all this money that changed their lives. They credit the stranger they rescued, who they think was an angel sent to test them.

Tagline: To get away clean, you have to play dirty.

Based on 1 rating
0 user 0 critic
Did you know? This is the first Parker film since author Donald E. Westlake's death in 2008. He is credited under his famous pseudonym Richard Stark. Read More
0 User Reviews
No reviews available. Click here to add a review.
Cast

Miscellaneous
As parker slides under the garage door at Melander's house, he would've broken the infra red safety beam causing it to re-open and alert Mr.Rodrigo and his gang.

Revealing Mistakes
When the SUV goes out of control following the carnival job and goes up on two wheels, one of the shots clearly shows the SUV's lights indicating it is in reverse gear, even though the car is always accelerating and moving forward throughout the scene.

Continuity
When the driver is shot in the right ear (blood everywhere) at about 17:20, the car goes out of control. When the car veers around the tree and goes skidding on two tires (about 17:38), we see the driver's right ear (17:39) - it is now uninjured.

Continuity
When the fireworks at the auction goes off, a woman in black dress runs down the center aisle twice.

Continuity
After his stabbed hand is stitched-up, and he's eating soup, you don't see a bandage or the stitches on his cut hand.

Crew/Equipment Visible
When Jason is driving the Bentley and makes a U turn and stops, a crew member and the gear are visible in the door.

Crew/Equipment Visible
The camera tow car is reflected in the buildings as Jennifer passes by.
Trivia:
This film is an adaptation of the 19th Parker novel, Flashfire written by Donald Westlake under the pen name Richard Stark.

This is the first adaptation of a Richard Stark/Parker novel to use the character name Parker.

This is the first Parker film since author Donald E. Westlake's death in 2008. He is credited under his famous pseudonym Richard Stark.

When Parker calls his girlfriend, her phone displays a caller ID of (504) 723-2343, which, when Googled, is the phone number of a Louisiana film crew person with the last name of Parker (who doesn't appear to have worked on this movie). 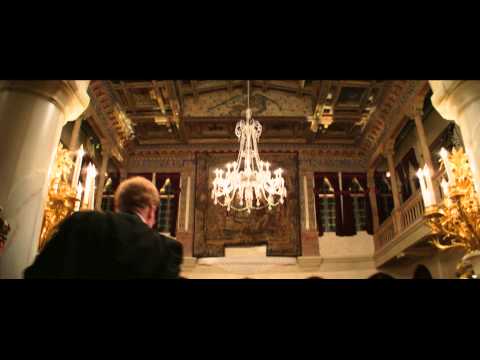 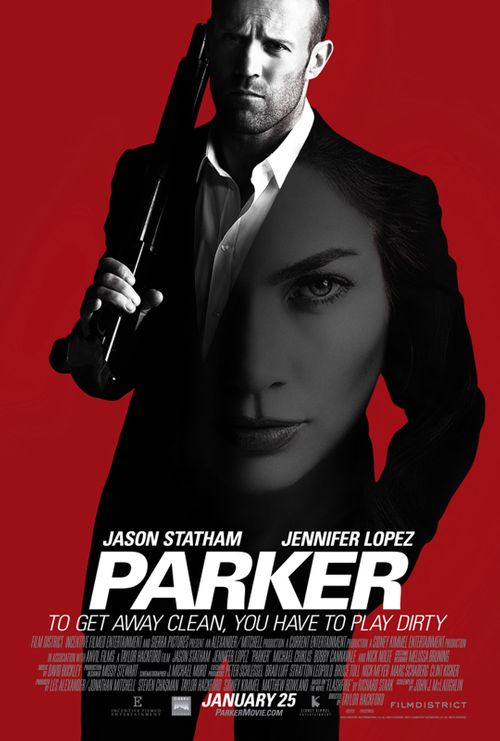 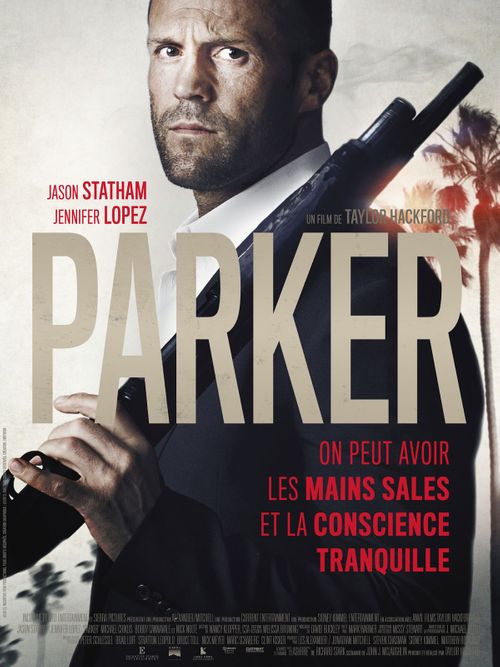 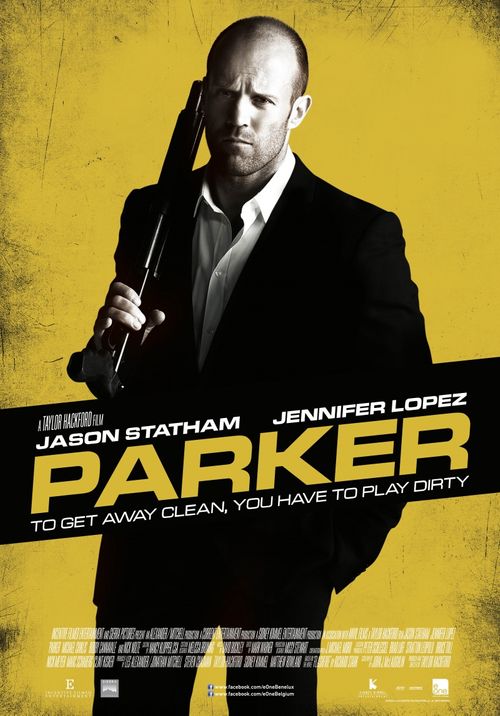 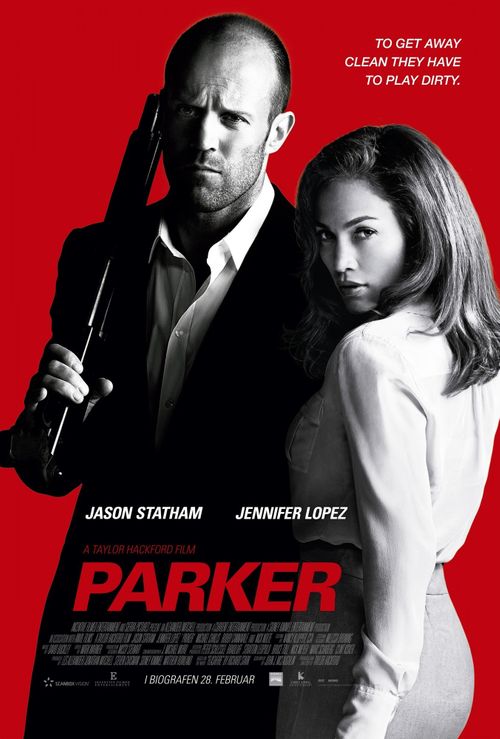