Cancel
Young FBI agent Johnny Utah infiltrates a gang of thieves who participate in extreme sports. It is a remake of 1991 film.
See Storyline (May Contain Spoilers)

A young FBI agent infiltrates an extraordinary team of extreme sports athletes he suspects of masterminding a string of unprecedented, sophisticated corporate heists. Deep undercover, and with his life in danger, he strives to prove these athletes are the architects of the mind-boggling crimes that are devastating the world's financial markets. Filmed on four continents, North America, Europe, South America and Asia, "Point Break" presents extraordinary feats performed by the world's top extreme sports athletes, and involves some of the most daring exploits ever committed to film. Extreme sports featured include snowboarding, wingsuit flying, free rock climbing, high-speed motocross, and surfing 70-foot waves.

Tagline: The only law that matters is gravity

Based on 0 rating
0 user 0 critic
Did you know? Bojesse Christopher who plays the FBI director was in the 1991 version of "Point Break" as well. He played Grommet, one of the surfer/bank robbers, the one who wore the LBJ mask. Read More
0 User Reviews
No reviews available. Click here to add a review.
Cast

This iteration of Johnny Utah sees the character as more of a wounded bird with demons to overcome; a slightly more damaged and broken man than the character we know from the 1991 film.

Chris Taylor, a business executive at Largo Entertainment, the production company that made the original Point Break, acquired the rights to remake the film after the business folded. He later partnered with Alcon Entertainment to develop the remake script over a 3-year period with writer Kurt Wimmer and director Ericson Core.

One of the few remakes/reboots to receive a PG-13 rating, while the original film is rated R. The others are Robocop and The Terminator.

In terms of tone and the overall approach to Point Break, Kosove wanted to go back to what he feels action films used to be, with higher stakes, "real action, real consequences and people getting hurt".

Both the original film and the remake share an undercurrent of political commentary, and a questioning of the status quo by radical means.

Bodhi's name on the FBI board is spelled incorrectly... "Bohdi".

Bracey came in to be interviewed with a face made up to look beaten. He explained with a grin that his character had been in a highly choreographed fight with Bodhi, which takes place in an underground fight club in France.

The villains in the film are simultaneously terrorists and extreme protectors of the environment. Kosove stated that everything they do is to be "one with nature". As such, the film explores themes of eco-terrorism and radical environmentalism as the driving force underlying the villains' actions.

Core also acts as cinematographer, a fact that actress Teresa Palmer called "a gift because he is so involved in every single aspect of this film."

The production relied on a variety of different digital cameras in order to depict extreme sports in new and innovative ways, including Go-Pros, the RED camera and an Opticom which Kosove described as a RED camera fastened to a remote controlled helicopter

Teresa Palmer, who plays Samsara in the film, describes her character as a kind of oracle, a woman who is "very deeply rooted in her spirituality and has been on this incredibly complex journey from when she was born... and these men look to her for answers."

Luke Bracey won the role of Johnny Utah after an extensive audition process, and he got the part due to the fact that he seemed "real" and unaffected, according to Kosove. An added bonus was the fact that Bracey has been surfing and playing rugby since childhood.

Palmer is the only female in the lead cast and mentioned that what drew her to Samsara was the strength and empowered wisdom of the character.

Édgar Ramírez, who plays Bodhi, likened his character's "wolf pack" of friends and criminals as something akin to "a ring of monks" due to their strict code of ethics and commitment to their cause.

The film includes a sequence shot at Venezuela's legendary Angel Falls, which is protected and as such required much participation from the local government as well as numerous permits.

The Angel Falls sequence is an expensive one, with a structure that cost upwards of $500K to build. It consisted of a platform that was approximately the size of a football field just beneath the summit of the falls where the crew set up camp so as not to disrupt the environment by making camp on the ground. Kosove likened the shoot at Angel Falls to a "full-scale military operation".

Despite being a self-proclaimed huge fan of the original film, Ramirez did not go back to the source material to prepare because he felt that what Swayze did with Bodhi was "beautiful and unique", and that attempting to redo it shouldn't be the goal. He described his performance and the film in general as a reimagining and as such, something unique and new.

Teresa Palmer has a son whom she named Bodhi Rain. The main character is also named Bodhi.

Some of the world's best athletes worked on this film, including Jeb Corliss, whom Kosove cited as being "the greatest wing suit athlete in the world". Legendary surfers Laird John Hamilton and Sebastian Zietz, and pro skateboarder Bob Burnquist were also involved.

While shooting second unit footage at the Jaws surf break in Maui, the crew was fortunate enough to catch one of the largest wave breaks of the last decade, being ridden by the world's top big wave surfers.

The film takes place over the period of about a month, and took close to a year to shoot. It was shot in over 10 countries and 4 continents. Point Break (2015) uses physical locations as much as possible, and the producers tried to be judicious when implementing green screens or VFX.

On the helmets used for a robbery they stuck caricatures of the Presidents, probably a tribute to the original Point Break.

Prior to the remake of Point Break being green lit there was a sequel in development that would have been set in Indonesia and star Australian actor Damien Walshe-Howling. The project was thought to have nothing in common with the original movie apart from the surfer/outlaw angle. The project was shelved after languishing in development for a number of years.

Gerard Butler was the first person being cast. He was cast as Bodhi but later dropped out due to scheduling conflicts.

Edgar Ramirez and Ray Winstone have both portrayed the god Ares in two Greek Myth movies: Percy Jackson and the Lightning Thief (Winstone) and Wrath of the Titans (Ramirez)

One location of the film in on the tallest uninterrupted waterfall in the world called Angel Falls that is located in Venezuela. Actor Edgar Ramirez who plays Bodhi in the film was born in Venezuela.

Director Ericson Core worked as the director of photography on The Fast and the Furious, a film very similar to Point Break (1991).

Bojesse Christopher who plays the FBI director was in the 1991 version of "Point Break" as well. He played Grommet, one of the surfer/bank robbers, the one who wore the LBJ mask.

Teresa Palmer has a son whom she named Bohdi Rain. The main character is also named Bohdi.

On the helmets used for a robbery they sticked the caricatures of the Presidents, probably a tribute to the original Point Break.

In the original 1991 film James Le Gros played one of the ex-Presidents, in the remake he plays a member of the FBI

James Le Gros who plays roach in the original film, also appears in this remake.

Gerard Butler was the first person being cast. He was cast as Bodhi but latter dropped out due to scheduling conflicts. 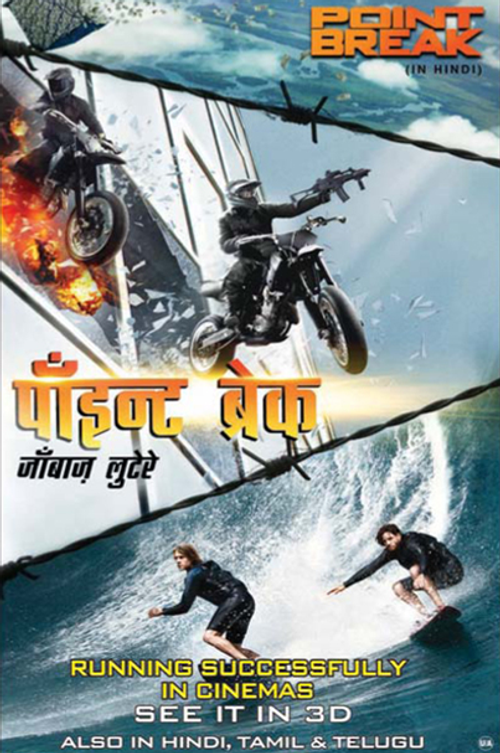