Cancel
Pandu is a killer for hire, willing to accept any contract, as long as the amount is right. The Police want him for questioning, while the underworld needs him to silence their opponents. No one really knows this assassin's background. It is only Pandu who knows his real identity and he has no intention of sharing it with anyone. What is the true identity of this mercenary?
See Storyline (May Contain Spoilers)

This fast-paced underworld thriller is set against the backdrop of Hyderabad, at a time when the city is rife with the nefarious activities of land mafia. There are two rival gangs, one under Ali Bhai (Prakash Raj) who resides in Dubai and controls the operation through his siblings Ajju and Mona, and another operated by local goon Narayan. Both threaten builders and land owners into giving them protection money or property, through force, extortion or murder. Sayed (Sayaji Shinde) arrives as the new Commissioner of Hyderabad and starts cracking down on crime.

Pandu (Mahesh Babu), a thug, is abducted by Mallesh, a member of Ali's gang and his henchmen. Pandu has taken a contract from Narayan to beat up Mallesh, which he does. Ajju invites Pandu to join Ali Bhai's gang. Pandu declines stating that he does not work for any gang, but is ready to do anything given enough money. Pandu falls in love with Shruthi (Ileana D'Cruz) when he visits his cousin's (Ajay) aerobics class, but she mistakes him for a thug. Shruthi, a college student, lives with her widowed mother and younger brother. Bramhi (Brahmanandam) lives above Shruthi's house, and frequently tries to convince Shruthi to marry him. Sub inspector Pashupathy (Ashish Vidyarthi), is a corrupt officer in the colony where Pandu and Shruthi live who often works with the land mafia. He is also on the payroll of Ali Bhai. He falls for Shruthi and decides to make her his mistress, even after multiple rejections by Shruthi.

Pandu's first assignment with Ali's gang is to kill a member of Narayan's band. However, police show up at the spot where Pandu and the other gangsters are waiting. Pandu engages the cops long enough for the others to finish the task and flee. He also helps Shruthi escape from Pashupathy. She is impressed by his kindness and friendship soon blossoms between the two, leading to the development of unspoken romantic feelings for each other. When Shruthi tries to expresses her feelings they are attacked by members of Narayan's gang, whom Pandu finishes off. Shruthi is shocked to learn that Pandu is a gangster with no qualms about killing people.

Pashupathy arranges for some thugs to pretend to rape Shruthi, so that no decent family will want to take her as their daughter-in-law; with no other option Shruthi and her mother will accept his demands. Pandu learns of this and assaults Pashupathy incognito, warning him that if he is found responsible for this incident then things will turn ugly for him. After much ado and mental anguish, Shruthi accepts Pandu.

Ali Bhai comes to Hyderabad and kills Narayan. He also meets Pandu to discuss the killing of a minister by blowing up a balloon. Pandu disagrees with Ali Bhai's method as it would involve killing innocents. In the middle of their argument police raid the club and arrest Ali Bhai. His gang members retaliate by creating a lewd video of the police commissioner's daughter and releasing it to media. They also kidnap her, forcing the police to release Ali Bhai. Ali Bhai drugs the commissioner's daughter, causing her to reveal that her father placed a mole in Ali Bhai's gang. They find that Pandu's friends father Suryanarayan was a police inspector and the inspector's son, Krishna, is now a part of Pandu's gang. Ali Bhai kills Krishna in front of Suryanaraya. However, it is revealed that the person who died was actually Ajay. Suryanaraya's son, Krishna Manohar, has gone undercover agent to finish off underworld mafia gangs. Ali Bhai kills Suryanaraya.

It is revealed that Pandu is Krishna Manohar. Krishna Manohar avenges his father's death by finishing off all members of Ali Bhai's gang including Ali Bhai and Pasupathy and saves the Commissioner's daughter.

Based on 7 ratings
1 user 0 critic

Based on 7 ratings
1 user 0 critic
Did you know? After the film's tremendous impact on commercial cinema, it was remade in multiple languages, in Tamil as 'Pokkiri' (2007) directed by Prabhu Deva and in Hindi cinema as 'Wanted' (2009). It was again remade in Kannada cinema as 'Porki' (2010). It was dubbed in Hindi as 'Tapoori Wanted'. Read More
1 User Review

Mahesh's performance was literally awesome and his punch dialogues are outstanding plus the music is the biggest plus.
Overall Mahesh's best performance

After the film's tremendous impact on commercial cinema, it was remade in multiple languages, in Tamil as 'Pokkiri' (2007) directed by Prabhu Deva and in Hindi cinema as 'Wanted' (2009). It was again remade in Kannada cinema as 'Porki' (2010). It was dubbed in Hindi as 'Tapoori Wanted'.

Pokiri ran for more than 500 days at a theater in Kurnool, Andhra Pradesh.

Pokiri was one of the highest grossers in the Indian film industry for 2006.

First Telugu movie to run successfully for 100 days in Chennai.

The last stunt sequence in the climax was shot over 10 days.

Ayesha Takia was supposed to play the role of Shruti but declined the role.

Mahesh Babu's other movie Sainikudu was stalled to complete the shooting of this film even though he signed the former first.
Buzz
14 Years Of Pokiri, The Movie Which Made Mahesh Babu A Superstar!
28 Apr 2020, by Sruthi Hemachandran 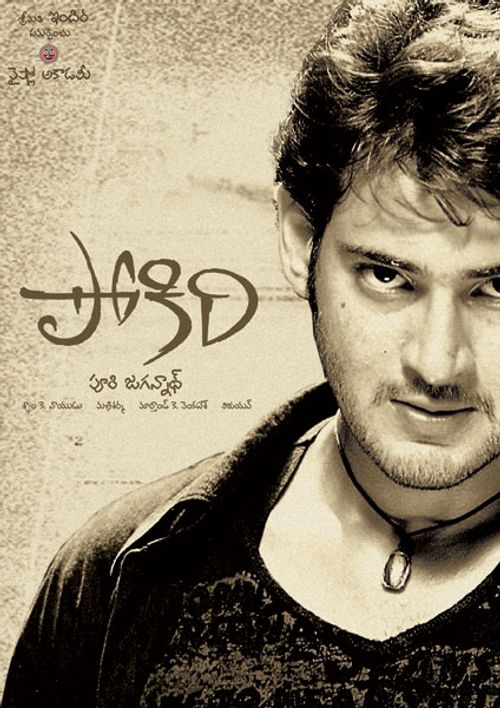