Cancel
While protecting his village from rampaging boar-god/demon, a confident young warrior, Ashitaka, is stricken by a deadly curse. To save his life, he must journey to the forests of the west. Once there, he's embroiled in a fierce campaign that humans were waging on the forest. The ambitious Lady Eboshi and her loyal clan use their guns against the gods of the forest and a brave young woman, Princess Mononoke, who was raised by a wolf-god. Ashitaka sees the good in both sides and tries to stem the flood of blood. This is met be animosity by both sides as they each see him as supporting the enemy.
See Storyline (May Contain Spoilers)

In Muromachi period Japan, an Emishi village is attacked by a demon. The last Emishi prince, Ashitaka, kills the demon before it reaches the village, but not before its corruption curses his right arm. The curse gives him superhuman fighting abilities, but will eventually kill him. The demon is revealed to be a boar god, Nago, corrupted by an iron ball lodged in his body. The village's wise woman tells Ashitaka that he may find a cure in the western lands Nago was exiled from.

Heading west, Ashitaka meets Jiko-bō, a wandering monk, who tells Ashitaka he may find help from the Great Forest Spirit, a Kirin-like creature by day and a giant "nightwalker" by night. Nearby, men are herding oxen to Irontown, led by Lady Eboshi, when they are attacked by a wolf clan led by the wolf goddess Moro. Riding one of the wolves is San, a human girl. Later, Ashitaka discovers two injured Irontown men, and sees San and her wolf clan; he greets them, but they ignore him and leave. He carries the injured men through the forest, where he encounters many kodama, and glimpses the Forest Spirit.

In Irontown, Ashitaka learns Eboshi has built the town by clear-cutting forests to reclaim ironsand and produce iron, leading to conflict with the forest gods. The town is a refuge for social outcasts, including former brothel workers and lepers, whom Eboshi employs to manufacture firearms to defend against the gods. Ashitaka also learns Eboshi is responsible for turning Nago into the demon. Eboshi explains that San, whom she calls Princess Mononoke, was raised by the wolves as one of their own, and harbors a deep resentment for humankind.

San infiltrates Irontown to kill Eboshi, but Ashitaka intervenes, knocking them both unconscious. As he leaves the town carrying San, he is shot by a villager, and falls unconscious while heading for the forest. San awakens and is about to kill the dying Ashitaka, but hesitates when he tells her that she is beautiful. She takes him to the forest, and decides to trust him after the mighty Forest Spirit saves his life.

Meanwhile, a clan of boars led by the blind boar god Okkoto attack Irontown to save the forest. Eboshi prepares for battle and sets out to kill the Forest Spirit. Jiko-bō, revealed to be a mercenary, intends to give the god's head to the Emperor of Japan in return for protection from local daimyo lords; according to legend, the severed head of the Forest Spirit grants immortality.

In the battle, Okkoto is corrupted by gunshot wounds. Disguising themselves in boar skins, Jiko-bō's men trick the rampaging Okkoto into leading them to the Forest Spirit. San desperately tries to stop Okkoto, but is swept up in the corruption consuming his body. Moro attacks him and appeals to Ashitaka to use his love for San to save her. However, Ashitaka's infection is accelerated and San is also cursed by the corruption.

Eboshi beheads the Forest Spirit during its transformation into the nightwalker; corruption pours from its body, killing all life it touches as it searches for its head, which Jiko-bō has stolen. The forest begins to decay while kodama die. Moro, dying from injuries sustained in the battle, uses the last of her strength to bite off Eboshi's right arm. After bandaging Eboshi and convincing San to help him get the Forest Spirit's head back, Ashitaka and San follow Jiko-bō to Irontown, where they manage to return the god's head. Restored, the Forest Spirit falls into the lake, healing the land, and cures Ashitaka and San of the curse.

Despite telling Ashitaka how much he means to her, San decides to remain in the forest due to her resentment of humankind. Ashitaka will help rebuild Irontown, but tells San he will visit her in the forest. In gratitude for Ashitaka's efforts, Eboshi vows to rebuild a better town, and Jiko-bō decides to give up as he "can't win against fools." The forest begins to grow back.

Tagline: The Fate Of The World Rests On The Courage Of One Warrior.

Based on 0 rating
0 user 0 critic
Did you know? Hayao Miyazaki personally corrected or redrew more than 80,000 of the film's 144,000 animation cels. Read More
0 User Reviews
No reviews available. Click here to add a review.
Cast

Editor
Hayao Miyazaki
Takeshi Seyama
Technical Details
Film Type:
Feature
Language:
English
Colour Info:
Color
Sound Mix:
Dolby, Dolby Digital
Frame Rate:
24 fps
Aspect Ratio:
1.85:1 (Flat)
Stereoscopy:
No
Fun Stuff
Taglines:
The Fate Of The World Rests On The Courage Of One Warrior.
Goofs:
Continuity
After Ashitaka is shot through the chest in one scene, San rides with him on the back of his red deer Yakul, and blood from his wound is seen on Yakul's back. The blood stain disappears after Ashitaka falls to the ground.

Continuity
In a scene where Ashitaka swims to Iron Town during the battle, there is a shot of the water. In the next shot, there is a floating corpse not visible in the previous shot.
Trivia:
Hayao Miyazaki personally corrected or redrew more than 80,000 of the film's 144,000 animation cels.

Hayao Miyazaki had intended to this be be his final film before retiring. Its great success led him to do another, Spirited Away (2001). He made some more films in the years after that.

This is the last major animated motion picture to be filmed on plastic animation cels.

Produced for about 2.35 billion Japanese Yen (approximately US$23.5 million) it was the most expensive anime ever made at the time of its release.

Leonardo Di Caprio was originally considered for the part of Ashitaka. 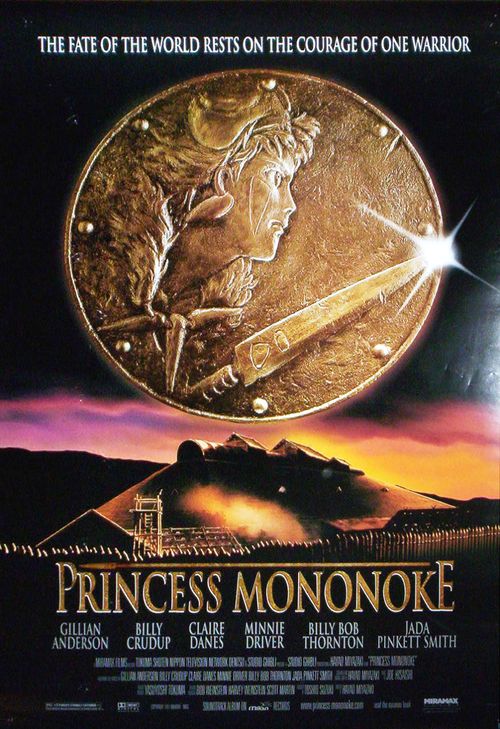 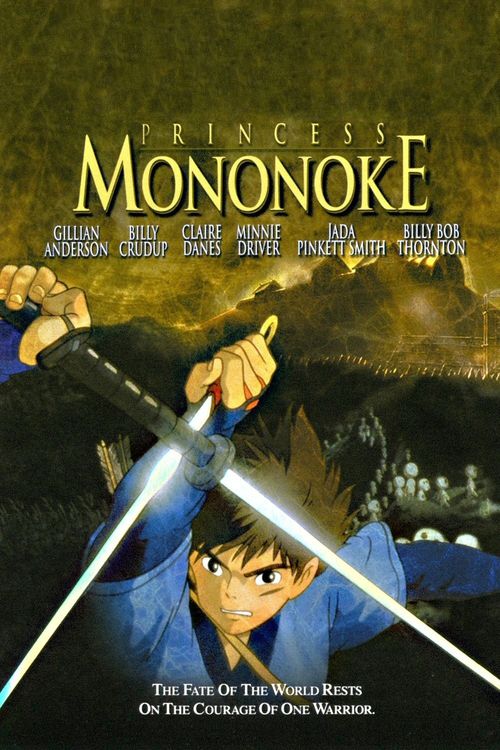 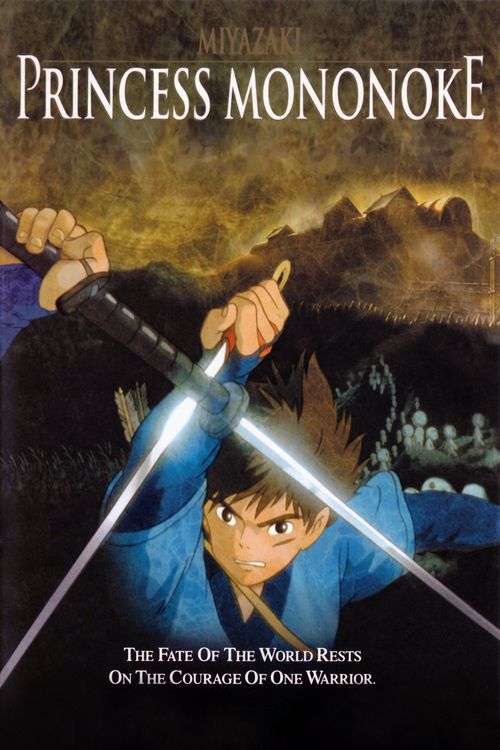