Cancel
Phoenix office-worker Marion Crane is fed up with the way life has treated her. She has to meet her lover Sam in lunch breaks and they cannot get married because Sam has to give most of his money away in alimony. One Friday Marion is trusted to bank $40,000 by her employer. Seeing the opportunity to take the money and start a new life, Marion leaves town and heads towards Sam's California store. Tired after the long drive and caught in a storm, she gets off the main highway and pulls into The Bates Motel. The motel is managed by a quiet young man called Norman who seems to be dominated by his mother. Will Marion succeed in skipping town with the money? How will her stay at The Bates Motel turn out for her? How will Norman deal with years of his mother's domination and oppression?
See Storyline (May Contain Spoilers)

Marion Crane and her boyfriend Sam Loomis meet for a secret romantic rendezvous during lunch hour at a hotel in Phoenix, Arizona. They discuss how they can barely afford to get married due to Sam's debts. Marion returns to work at a realtor's office. A client comes in with $40,000 ($318,875.14 when adjusted for inflation) in cash to purchase a house for his daughter and flirts with her. When the money is entrusted to her, she decides to steal it and skip town to give it to Sam.

On the road, she pulls over to sleep and is awakened by a policeman who can tell something is wrong because of her unusual behavior. The policeman lets her go but, upon arriving in another town, Marion pulls into a used car dealership and hastily exchanges her car, a 1956 Ford Mainline for another one, a 1957 Ford Custom 300.

Driving during the rainy night, she imagines conversations in her mind made by her boss and the client discussing the stolen money, and she becomes nervous. After accidentally taking a wrong turn, Marion pulls up to the Bates Motel, a remote lodging that has recently lost business due to a diversion of the main highway.

The youthful proprietor, nervous but friendly Norman Bates, invites her to a light dinner. Marion, alone in her cabin, overhears a heated argument between Norman and his mother about inviting her to the house, and he ends up bringing her dinner to the motel parlor. Norman talks about his daily life and his hobby, taxidermy and discloses that his mother Norma is mentally ill, but he becomes irate when Marion suggests that she should be institutionalized.

During their conversation, Marion decides to return to Phoenix and return the stolen money. Upon returning to her cabin, Norman, looking through a hole he had made in the parlor wall long ago, sees her undress, and returns to his house behind the motel. Marion subtracts the amount of money she spent from the stolen money, then tears up the paper and flushes it.

She then takes a shower, during which a shadowy figure of an elderly woman enters the bathroom and repeatedly stabs her to death with a large kitchen knife. Norman discovers Marion's dead body and, convinced that his mother had committed the crime, he wraps the body in the shower curtain and cleans up the bathroom. He puts Marion's body in the trunk of her car, along with all her possessions and, unknowingly, the money, and sinks it in a nearby swamp.

Norman's evasiveness and stammering arouse his suspicions; when Norman mentions that Marion had met his mother, Arbogast demands to speak to her but Norman refuses. Arbogast later calls Lila and Sam and briefly tells them about his encounter with Norman. After that, he enters the Bates' residence, looking for Norman's mother. A figure emerges from her room and murders Arbogast on top of the staircase.

Fearing something has happened to Arbogast, Sam and Lila go to the town of Fairvale and talk with the local sheriff. He is puzzled by the detective's claim that he was planning to talk to Norman's mother, stating that Mrs. Norma Bates died ten years ago, along with her lover, in a murder-suicide. He calls Norman to ask him about Arbogast, and is told that he asked some questions and left.

Back at the Bates' house, Norman, seen from above, carries his mother down to the cellar of their house; she verbally protests the arrangement, but he explains that she needs to hide from whoever comes looking for Arbogast and Marion.
Sam and Lila, posing as husband and wife, rent a room at the Bates Motel and search the cabin that Marion stayed in. Lila finds the scrap of paper that Marion supposedly flushed with "$40,000" written on it inside the toilet, while Sam notes that the bathtub has no shower curtain.

Lila, determined to speak to Mrs. Bates (who she does not believe is dead), develops a plan. Sam distracts Norman with talk while Lila sneaks into the house, looking for Mrs. Bates. She searches her room and Norman's room. Norman subdues Sam and chases Lila. Seeing Norman approaching, Lila hides in the cellar and discovers Mrs. Bates sitting in a rocking chair. She calls out to the woman, but gets no reply.

The chair rotates to reveal a desiccated corpse of Mrs. Bates, shocking Lila into screaming with fear. A figure enters the basement, wearing a dress and wig while wielding a large knife, revealing Norman to be the murderer all along. Sam enters and just manages to overpower Norman.

After Norman's arrest, a psychiatrist who interviewed Norman reveals not only the killings of Marion and Arbogast but that Norman had been excessively dominated by his mother since childhood, and when she took a lover, he became insanely jealous that she had "replaced him", and murdered his mother and her lover years ago.

Later, he developed a split personality to erase the crime of matricide from his memory and "immortalize" his mother by stealing and "preserving" her corpse. When he feels any sexual attraction towards someone, as was the case with Marion, the "Mother" side of his mind becomes jealous and enraged.

At times, he is able to function as Norman but other times, the "Mother" personality completely dominates him. The psychiatrist also reveals that Norman, in his "Mother" state, had killed two missing young girls prior to Marion's arrival.
Norman is now locked into his mother's identity permanently.

Mrs. Bates, in a voice-over, talks about how it was really Norman, not her, who committed all those murders and that she should have 'put him away' years ago, finally saying that she 'wouldn't even harm a fly' (A double exposure shows Norman's face merging with that of his mother's corpse). The final scene shows Marion's car being recovered from the swamp.

Based on 0 rating
0 user 2 critic
Did you know? This marks as Hitchcock's first horror movie. Read More
2 Critic Reviews

Alfred Hitchcock's 1960 horror thriller 'Psycho' is one of the most celebrated films in history
Mark Monahan, The Telegraph
0

Revealing Mistakes
In the scene where Norman is walking through the ground floor of the house shortly before the shower scene, he grabs hold of the giant, wooden stair banisters, which wobble unnaturally.

Continuity
In the shower scene, when Norman is stabbing Marion, his right arm gets completely wet but when he walks away, it's dry.

Continuity
In the scene where Norman comes to clean the evidence of Marion Crane's death, there is blood on the floor. In the immediate capture, there is seen less blood in the same spot. Norman couldn't have mopped the blood away that quickly.

Revealing Mistakes
In the shower scene, when Marion is seen in front of the shower curtain, there are two different water jets, visible by different angles towards each other, revealing that besides the shower head, an additional source of water was used.

Revealing Mistakes
In the scene where Lila approaches Mother in the fruit cellar, we see Mrs. Bates seated in a four-legged chair. After Ms. Miles touches the corpse, it slowly spins around as if it's sitting on a swiveling chair. The effect was achieved by a prop man lying on his back rotating a camera head with wheels underneath Mother.

Revealing Mistakes
In the scene where Janet Leigh is in the car dealer bathroom getting the cash, as the envelope is being returned to her purse the top couple bills fold back revealing a $1 bill, not another $100 as the stack is expected to contain.

Continuity
In the scene where Norman is making his way from the house to the hotel office to greet Marion, it is pouring rain outside. However, in the next shot when he's in the hotel office his suit is completely dry.

Continuity
In the scene where the police officer backs in behind Marion's car on shoulder of the highway, no tire tracks from his vehicle are visible in the soft dirt.
Trivia:
Psycho (1960) was selected for preservation by The Library of Congress at The National Film Registry in1992.

In the murder scene in the shower, we can spot two split-second frames of the knife touching the body.

Paramount provided Hitchcock a very small budget to work with, because of their distaste with the source material. They also deferred most of the net profits to Hitchcock, thinking the film would fail. When it became a sleeper hit, Hitchcock made a fortune.

The score, composed by Bernard Herrmann, he played entirely by stringed instruments.

This movie was filmed in just 30 days.

This film marks as the first American film ever to show a toilet flushing on screen. 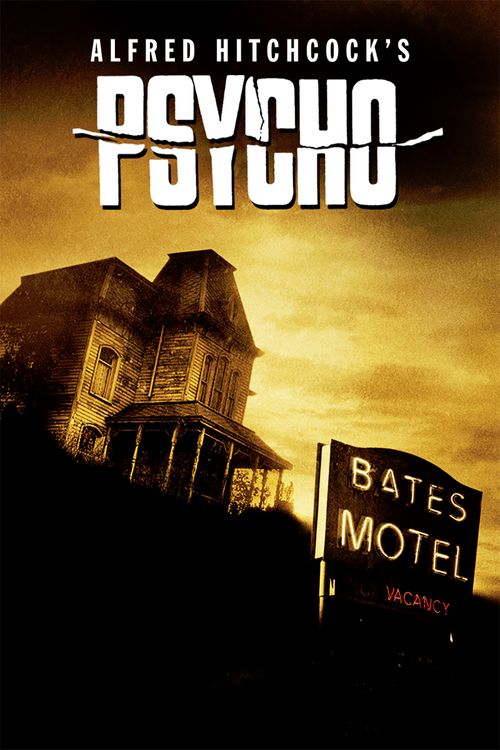 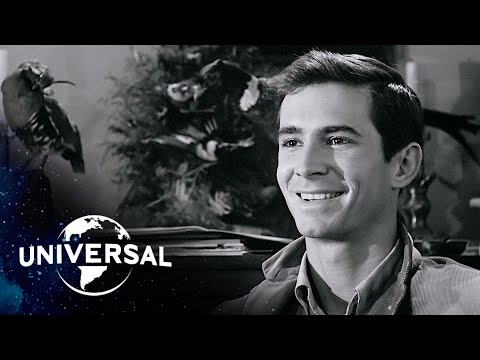