Cancel
An unemployed youth grabs an opportunity to impersonate a wealthy man. He gets to live in a 5 star hotel, where he meets a girl who could be the love of his life. However, he is targeted by a killer, who has been hired to assassinate the wealthy man. What will the future hold in store for him?
See Storyline (May Contain Spoilers)

The hero (an unemployed young man) gets the opportunity to impersonate a wealthy man, enter a grand five-star hotel and start living a life of luxury. There, he meets a girl, who is the daughter and assistant of a magician (K.S.Ramesh), who is residing in the hotel with his daughter and wife (Farida Jalal). Unknown to everybody, the rich man's brother has ordered a hit on him. The brother plans to usurp the whole estate by later killing his sister-in-law (Ramya). The hired killer too thinks like everybody else that the unemployed youth is actually his target.

The killer comes up with ingenious ways to kill the hero, but he always fails, falling in his own trap. All this time, the hero remains ignorant about the danger his life is in. One day, however, the hero figures out that the killer is in the hotel to kill someone, but is unable to find the identity of his target. Suddenly, the hotel owner (Loknath) dies in his own hotel of old age. In a montage shown about the owner, the hero realises that the owner was a poor man, just like him. Seeing what the owner achieved by fair means, the hero begins to question his actions.

Some days later, the roadside beggar dies and municipality people come to take his dead body. However, seeing the beggar's stash, they nearly throw his body on the pavement and start stealing the money. The hero decides to make things right. Meanwhile, the killer and the rich man's brother realise that they were targeting the wrong man all the time. At this time, the wealthy man's wife learns of her brother-in-laws treachery, upon which he locks her up in the bungalow.

The hero figures out the killer's plan and sets the rich man free. He explains the situation to the rich man. The rich man goes back to his bungalow, where he learns the truth. While the rich man and the hero are able to rescue the rich man's wife, the police arrest the villains. After the matter has been taken care of, the hero decides to come clean to the heroine as well. He learns that the heroine's family is about to leave the hotel.

The hero confesses the truth to the heroine, but to his surprise she forgives him. While leaving the hotel, she drops a rose wrapped in a paper from her car, meaning that she has given him her address. However, before the hero can get the rose, another car comes and mows down the rose, taking it with it implying the lovers never unite .

The hero is not able to get the heroine, but some days later, he is shown in a line for a job vacancy, although this time he has a rose in his hands and hope in his eyes. While it is not clear that the hero got the job or not, it is certain that his outlook towards life has changed.

Based on 1 rating
0 user 0 critic
Did you know? Pushpaka Vimanamu was freely shown in theaters throughout the nation and also internationally as the silent medium had become really popular. Read More
0 User Reviews
No reviews available. Click here to add a review.
Cast

Sameer Khakhar
as The Millionaire

Director of Photography
BC Gowrishankar

Pushpaka Vimanamu has won the National Award for Best popular Film 1988 among many other awards and accolades.

Pushpaka Vimanamu was freely shown in theaters throughout the nation and also internationally as the silent medium had become really popular.

The Windsor Manor hotel in Bangalore has been featured in this movie. 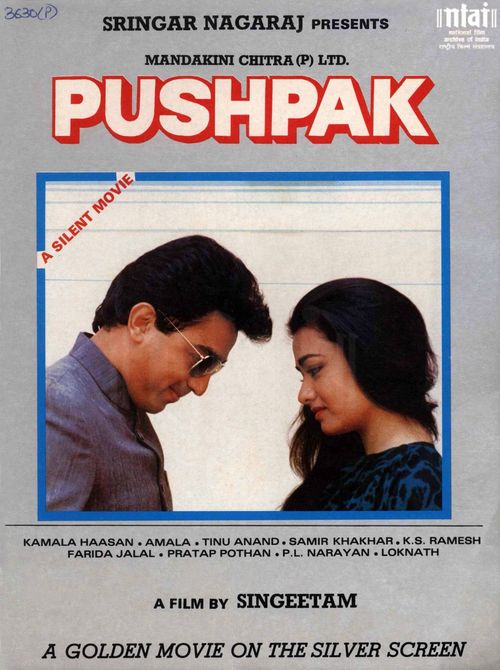