Cancel
Jagmohan Jugral (Anupam Kher) kills his twin brother, Manmohan, in order to escape from Customs Officer Verma (Dalip Tahil). In the chase that follows, Jagmohan also kills Verma, and a doctor, Ashok Soni. With their deaths their children, Ramesh and Seema, are orphaned and end up at an orphanage. Both get separated when Seema is adopted by a respected couple. Ramesh runs away from the orphange and is adopted by Girdharilal (Paresh Rawal), a career thief. Ramesh learns all the skills of thievery from Girdharilal. Ramesh (Anil Kapoor) is now grown up a better career thief than Gidharilal, and Seema (Sridevi) too has grown up. Both are on the look-out for Jugral, who is now known as a very respectable citizen. The onus is now on Ramesh and Seema is convince a seemingly ignorant community about the wrong-doing of it's very own respectable citizen.
See Storyline (May Contain Spoilers)

Jagmohan Lal aka Jugran is a crime lord who wants to climb up the crime ladder. Once, when Customs Officer Verma tries to nab him, he escapes. To save his skin, Jugran kills his twin brother Manmohan Lal and takes the identity of latter. The world is led to believe that Jugran is still on the run. Meanwhile, Jugran kills Verma and a Dr. Ashok, destroying both the families in process. While Verma's orphaned sons Ramesh and Ravi are separated from each other, Dr. Ashok's daughter Seema is left with her distraught mother, who has lost her sanity.

Many years later, Jugran has become a big name in underworld. He lives a double life as his twin brother Manmohan, who is highly respected in society. Meanwhile, Ravi Verma has become an Inspector and Ramesh has become a crook and a safecracker by the name of Romeo. While both the brothers are unaware of each other's identities, there is one things that binds them together: one has a lock, other has the only key that can open the lock. Seema too has become a crook called Simmi and her path starts crossing with Romeo's. Romeo is now working for Seth Girdharilal, who mentors many thieves and goons like him.

Only Ravi knows that Jugran killed his father. One day, Seema runs into "Manmohan", who realizes that he had killed her father. Jugran himself needs somebody to pull a Rs. 100 crore heist. He meets her as Jugran and tells her that he will need her help to find Romeo for the heist. Simmi hesitates, until Jugran reveals that he knows her fathers murderers identity. She catches upon Romeo and tries to seduce him, but Romeo berates her. Now, Simmi reveals her story to him. Romeo is surprised to see Simmi's mother, since it means that Simmi is actually is childhood sweetheart Seema.

Now he reveals his true identity to Seema, causing the duo to pair up. Meanwhile, Ravi too gets an inkling that Jugran is planning something big with help of Simmi and Romeo. Ravi and Romeo run into each other, only to learn that they are brothers. After many twists and turns, Simmi and Romeo finally succeed in turning over the loot to Jugran. After they turn over the loot to Jugran, he binds and gags them after telling Simmi the truth, leaving the duo to die by falling in a boiler containing boiling acid. The duo are saved by Romeo's pet pigeon.

Romeo and Simmi escape, but they get separated from each other. Here, Romeo runs into Ravi, whereupon the latter tries to arrest him. After Romeo tells him the truth, an enraged Ravi reveals to Ramesh that Jugran killed their father too. Ramesh escapes and rejoins Simmi. When he sees "Manmohan" on TV, Ramesh tells Seema that Manmohan and Jugran are the same person. Meanwhile, Ravi gets a tipoff, upon which he turns up at a party almost simultaneously with Ramesh and Seema. Ramesh reveals that when his pigeon perched on Jugran's left hand, it left claw marks, just as seen on Manmohan's left hand. Therefore, Manmohan and Jugran are same person.

Ravi scoffs at the claim and tells them that Manmohan's fingerprints are available and it won't be difficult to find out that Manmohan and Jugran are indeed two different people. Seeing that his charade is coming to an abrupt stop, Jugran tries to run away. It is revealed that Ramesh had given the tipoff to Ravi about Jugran. Jugran succeeds in escaping, while his men try to kill Ravi, Ramesh and Seema. The trio manage to kill their way to Jugran, who himself tries to shoot them. The trio quickly retaliate, killing him on spot.

Based on 1 rating
0 user 0 critic
Did you know? This was the last film in which Jackie Shroff acted with Sridevi. Read More
0 User Reviews
No reviews available. Click here to add a review.
Cast

This was the last film in which Jackie Shroff acted with Sridevi.

Shekhar Kapur dropped out of the film halfway, feeling that it lacked soul. He was then replaced by Satish Kaushik. 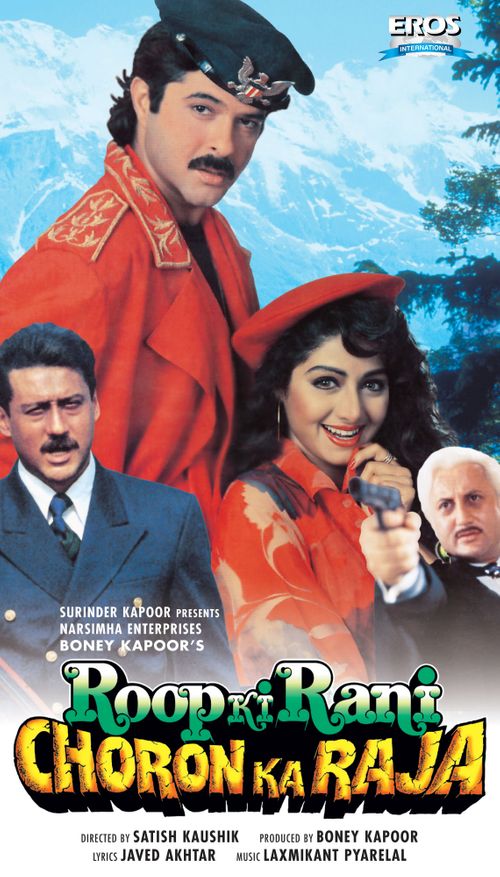